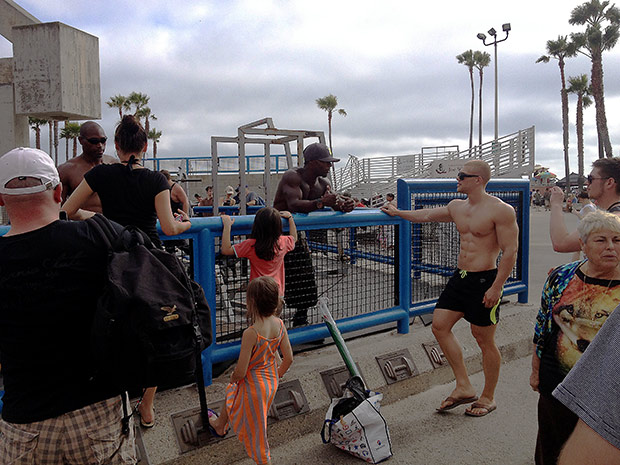 While Jackson is recovering from a successful surgery to fuse two cervical vertebrae, he left us his notes on training for size and strength – notes he’ll have to put to good use when he’s allowed to take off his neck brace and start rebuilding his back and shoulders. Want to help out while he’s on hiatus? Send him your fitness questions and concerns at jacksonwest@gmail.com so he has some material ready upon his return!

We all hate ourselves in ultimately unique if generally similar ways, which means while the market for weight loss is probably the largest of the medical-insecurity complex, there’s also plenty of misleading, exploitative, insincere and dangerous advice for people trying to bulk up! And regardless of anyone’s motivations, they don’t deserve it either.

There are lots of reasons someone might want to add large amounts of lean muscle mass to their frame: For increased strength, for faster reflexes, for a hungrier metabolism, for a lustier libido, for an athletic advantage or to fill out a wardrobe. Yes, it’s okay to be vain!

So what is it, exactly, that you want, and how can you get it safely and reliably, with a minimum of significant, negative consequences like hurting yourself or others? If you want to grow the volume of lean muscle tissue in any or all areas of the body, it’s pretty simple, if not easy. But that’s different than becoming as strong as you can possibly be, or even as lean as you can possibly be, though these aspects of body composition are interrelated. It also means you can’t maximize them unilaterally.

Competitive body builders are not weak by any standard, but even as lean as they are, pound for pound, they are not necessarily as strong in classic power lifts as competitive weightlifters. Weightlifters also serve to demonstrate that there’s nothing that says you have to be maximally lean to be maximally strong.

“You want to be very honest with yourself — and with me — about your goals,” explained Tim Ehhalt of Roving Athletics, trainer and husband to SF Appeal publisher Eve Batey.

Do note the importance of rest: without time to recover, the microtraumas can become macro problems

He’s never actually pursued muscle mass for the sake of it himself, but has to reassure many clients who come in wanting to be leaner but “don’t want to bulk up” that lifting real barbells and not just hand weights won’t inevitably turn them into the Terminator. “If only it were that easy!”

The common wisdom is that by pushing muscle fibers near the limits of exhaustion, you induce microtraumas to the tissues, and as the body rebuilds over the next 24 to 72 hours it will overcompensate to adapt to the increasingly stressful demands, creating marginally more skeletal muscle. And do note the importance of rest — without time to recover, the microtraumas can become macro problems in the form of injuries that stall or even prevent progress. This is the foundational physiological axiom behind periodized training programs.

Like with storing fat, when building muscle you do not primarily grow more muscle cells, but the cells themselves get larger — either through a larger volume of contractile proteins, as in myofibrillar hypertrophy, or a larger volume of surrounding sarcoplasmic fluid in which glycogen fuel and oxygen-carrying mygoblobin are stored — leading to more volume overall.

Skeletal muscle cells come in two main types, slow twitch and fast twitch. If you’re maximizing for size, then your focus will be on fast twitch fibers. These fibers can contract much more often, and much more powerfully, but are the least energy efficient and fatigue the most quickly. These are also the fibers that decline most significantly with age.

The largest and most powerful of the fast twitch muscle fibers are also the last to be recruited into action, such as at the very peak of resistance in a lift. I could run 26.2 miles and hardly trigger them, as my goal with aerobic endurance is to maximally utilize the lower volume, more energy efficient slow twitch fibers — at least until the kick at the very end. Which is why when running or other cardiovascular exercise is part of a strength or size regimen, the emphasis is on sprints and other intense intervals.

To maximize for strength while developing larger muscles, focus on programs that suggest fewer repetitions per set, like two to six, at weights closer to your absolute maximum. To shift the balance towards muscle volume, increase the reps per set anywhere from eight to twelve and decrease the weight. Either way you should be near or at exhaustion at the end of the set. There are any number of more complex systems available when you exhaust that strategy’s potential.

Of course, any lifting is more than no lifting, so you’re bound to see some results eventually no matter how you get through your program. Take it easy and focus on form before you start increasing the weight and reps. If you’re just starting out, you’re going to see general results pretty quickly after a couple of months pretty much no matter what, but will later reach a plateau.

That’s when it’s time to get more specific: “Pick one freaking goal for six weeks, three months, focus,” Tim reminds. “People get caught up in trying to do everything.”

Tim generally starts his clients where he works, maximizing for strength at five reps per set following the principles set forth in Practical Program for Strength Training.

But for a client that asked specifically to add some meat to their frame, he recommends up to ten or even fifteen reps per set. Also? “Eat everything in sight.”

“People get caught up in trying to do everything.”

That’s because you’re going to need lots and lots of macronutrients like protein for the muscles to build with. Recommendations will range anywhere from a low of 1.2 grams of protein per kilogram of body weight daily up to 4g/kg. You’ll also need more carbohydrates, and as you get bigger, so will the demands.

“It’s a chore to get in all those calories,” Tim points out, and it’s true — you might imagine that eating endless steak and pie is some sort of gift, but I can tell you from experience that forcing yourself to eat isn’t much more pleasant than trying to force yourself not to.

As for supplements? You can ask your doctor for a metabolic panel blood test to see if you’re low on any essential nutrients like vitamin D or minerals like zinc. Otherwise, save those for when you’ve already made some progress and want to try making just a little more. First, build yourself a set regimen as a baseline, and only then introduce supplements one at a time to see if they work for you.

The balance of your endocrine system is also something to consider, if very carefully. The more Testosterone you have, the more stress you’ll be able to endure and the faster your body will recover from that stress through anabolic response, or muscle building. However higher levels of another steroid, the stress hormone cortisol, can trigger the opposite, catabolic response which can work against muscle development.

Look, everyone has their own aesthetic ideals and their reasons for pursuing them through fitness, or not. Maybe it’s part of a larger strategy of self-realization! Maybe it’s a way to preen for courtship rituals! Maybe it’s to exert some power within the limited range of options available the moment, real or perceived! Maybe it’s because all your friends are doing it! Maybe all of the above, and you can change your mind at any time! Your body and your reasons are your own. Enjoy it while it lasts!