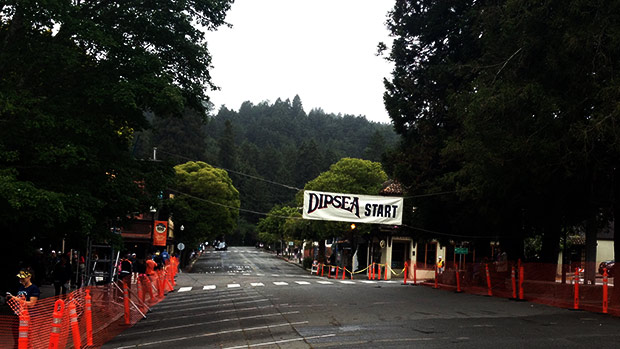 It was a delightfully gray Sunday in Mill Valley when I arrived to pick up my bib for the 103rd Dipsea Race. Clouds shrouded Mount Tamalpais from view, but nobody in neon short-shorts was complaining about the chill after Saturday’s weather suggested another scorcher like last year’s event and participants were warned to watch out for dehydration. Runners like it cool, so the fog bank rolling in from the finish line in Stinson Beach and through the redwood groves of Muir Woods carried the promise of personal bests.

Assuming you survived. This year as my group assembled in the starting corral the official warnings were about slick stairs on the steep descents instead of dehydration. The cathedral of conifers that cover the course evolved to condense ambient humidity, making their own rain to irrigate their roots throughout the year. I winced at the prospect of a slip since just last week I was diagnosed with a slipped disc in my neck.

It’s a dangerous race in the best of conditions and for runners in the best of health, and I was well aware what I was risking paralysis or even death, having seen the results of the MRI and the fibrous tissue of the disc between my sixth and seventh cervical vertebrae bulging only a hair’s width from the bundle of nerves in my central spine.

But then I’m risking paralysis and death as I head in for cervical anterior fusion surgery today. While it’s a fairly common procedure, and the surgeons at the UCSF Spine Center couldn’t be more highly recommended, and my ultimate prognosis is good, there are no guarantees. Regardless, even if I’d opted to delay surgery, my plans for qualifying for the 2014 Boston Marathon are pretty much shot. Surgery or no surgery, I won’t be running for months. Again.

After bursting into tears on the exam table upon hearing the diagnosis and recommended treatment, I asked my surgeon about the race. Could I have this last hurrah before going under the knife? He was understandably discouraging, but asked, essentially, what was in it for me? Did I have a shot at winning? The answer is no, I will probably never earn one of the coveted black shirts awarded to the top fifty finishers each year, much less first place.

But then I was pretty lucky even to get a chance to compete — the race is capped at 1,500 people, and thousands of runners apply for entry from around the world every year. I doubt I’ll ever get such a literal opportunity to risk my neck in order to do something I love again. So I took it.

The race famously staggers runners by age and gender, offering up to 25 minutes of head start to the oldest and youngest runners. A first wave of 750 “Invitational” entrants leave, then another wave of 750 “Runners” who won the entry lottery. Last year I was a runner, this year I’d been placed among the invitees. At 36, I was in the second to last group, one minute ahead of the “scratch” group of men in their prime.

I got off to a slow start, partly because I hadn’t run in three weeks and partly because, well, that’s my way. My group went out ahead of me, Just as I hit the first of the famous Dipsea Steps, the first runner from the group behind me lamented of the congestion I represented as he passed me, “Really, already?” But I stuck to my plan, checked my heart rate monitor half way up the second of three flights as I stuttered up each of the 671 steps and pushed through a lot of doubt.

I figured I could start to push myself on the climbs, which are relatively safe footing, and passed climbers from groups ahead of me without wasting my breath on live color commentary. Once I warmed up, I started to push myself on the easy grades as well. It was tight turns and descents that I was worried about as I crested Panaroma Highway and started my controlled fall down to Muir Creek.

Back at the hospital, after I’d pulled myself together somewhat and confirmed that I wanted to go ahead with the surgery immediately, it occurred to my doctor that maybe the intense grief I expressed over the prospect of missing out on the Dipsea, or running generally, might be tied to my depression. I will be the first to admit that whatever it is I get out of running, I’m really not sure what I’d do without it. As I wandered around the Parnassus campus making arrangements in a bit of a fugue, drinking occurred to me.

But when actually faced with the prospect of Suicide — an infamous and brutally steep shortcut early on in the race — I hung right and stayed on the official trail. Accepting some risk doesn’t mean having to accept all risk, and the previous year it had proven the correct decision tactically. I crossed the creek and started up Dynamite, my stride loose and my doubt gone. I was starting to pass some of the slower runners in the groups ahead of me in earnest. I had this.

But just before I reached the fire road, a tall runner was staggering past a low-hanging branch ahead of me, and from behind I could see him examining his bloody palm. I lightly threw my arm around his shoulder and started to walk with him. He was bleeding profusely from the forehead.

“What happened,” he asked.

“You hit your head on a tree, you probably have a concussion. What year is it?”

“You need to sit down.” The last runner I had passed came up from behind and checked in. “I’m going ahead to get a volunteer,” I yelled as I continued on. Either one would come up from behind, or I’d be the first to get to the next one up the trail, which I did about half a mile later. He thumbed his radio as he hurried back.

Upon entering The Rainforest, I happened across two EMTs, a man examining another runner bleeding from the head and a woman looking on with concern. “There’s another head wound back down the trail,” I shouted as I went past, “Possible concussion. I sent a volunteer back.” I slowed to make eye contact and wait for a reaction as her radio squawked. “Another one?” Her look was distraught, but I took that reaction as consequence of assuming responsibility and therefore my release from duty. All I could do was shrug it off, keep my head up and carry on.

I crested Cardiac, quaffed some electrolytes at the aid station at the peak. The fog had cleared and I was feeling strong, so I decided to take a chance on The Swoop, a screamingly narrow, high-pitched dive through the wilderness. But I got caught behind some slower runners I couldn’t pass and had to brake not to barrel through the woman just ahead of me as the lot of us flailed through the brush.

I rushed ahead when we returned to the official trail only to stumble onto the slick, wet, slimy wooden tie stairs of Steep Ravine. If there was anywhere I might go down for good, this was it. And I almost did: As I leaned in to a left turn, my inside left foot slipped right to the outside across a step, tilting my body precariously toward horizontal. But my right hip swung my other leg around just in time for my right foot to catch some duff. Then the rest of my core yanked me square during the following fall so my left foot could race back around and underneath, and I kept right on tapping out a high-tempo cadence without missing a beat. “Nice save,” I heard behind me. My thought was “Hallelujah, Hunky Jesus!”

After crossing the bridge at the bottom of the hill, I could see another tall runner ahead of me coming up on another low hanging branch. “Watch your head,” I shouted, and he ducked just in time. “Thanks,” he said as I passed him. Third time’s the charm, I guess. Later, after the course veered off the route I remember, down Panaromic highway and into some overgrown, underfamiliar singletrack, it was my turn to duck just in time. Shortly thereafter another runner went down directly in front of me, and I just threw my arms and momentum under his to push him upright — though to be honest, helping him up was also the easiest way to slip past him.

I burned what I had left on the sprint to the finish with a course time of 1:12:43. A personal best, and pretty much dead on my Dipsea Quotient calculations — though not fast enough to make the cutoff for an invite next year, which was my aspiration. The black shirts for this year and the bib numbers for next were gone, so nothing was left for me but the free tee and my finisher’s medal.

It has occurred to me that my love of running might have contributed to the accelerated degeneration of my intervertebral disc. Maybe I have been pushing myself too hard through one injury recovery right into another? I have joked that I run like I drank, but maybe that’s not so funny after all.

Then again it’s easy to sit on your couch and worry about what might go wrong during a workout. It’s also true that no matter how fast and fit you are, you can’t actually outrun your own mortality. As big a risk as that run might have been, I used to take bigger risks with my health for worse reasons and had much less fun with direct, negative consequences as a matter of course.

It has also occurred to me that I have finally started to realize my athletic dreams and talent just in time for my age to start betraying me. Then again, if Diana Fitzpatrick is any indication, there may be some hope yet: The Larkspur local is nearly twenty years older than me and was over ten minutes faster, good for first across the line ahead of 1,409 other finishers.

Giddy and crying, I squeezed my partner Riana before stumbling down the beach to take the obligatory dip in the sea. More tears. Another grin. An ambling toddler pointed to me and my medal. “He won, mommy! Look, he won!” Eh, they give these to everyone, kid, I thought.

But I caught myself falling one last time: Fuck that! Yes. Yes I did win.