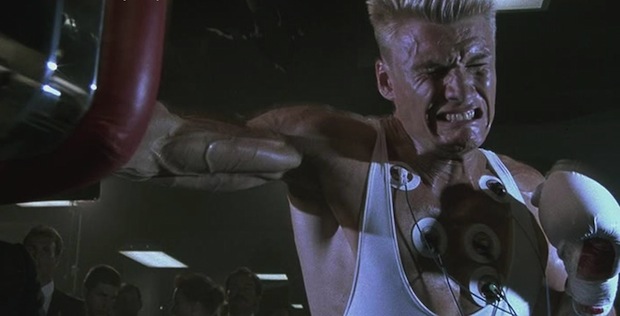 Rocky IV is probably second on my short list of Cold War-era right wing propaganda sports films. Red Dawn is the apotheosis of that particular brand of kitsch in realizing the fascist fantasies of the weekend football warrior, and the battle with the menacing, bearded Communist of American Flyers is a kind of sadly tacked-on afterthought with no real feeling behind its lazy stereotypes. But if contempt is a sign of vulnerability, then the contempt with which these films held the purported ruthless technocracy and robotic groupthink of the Soviets exposed a sense of inadequacy on the part of our own athletic hero worship machine and a threat to exceptionalism and rugged individualism.

Cocaine-fueled studio executives knew we needed Rocky sprinting away from bumbling, red-nosed apparatchiks to offset the calculating, lab-coated minders because, in reality, Ivan Drago’s steroid-fueled teammates were actually winning on the field. The Eastern Bloc countries dominated international athletic competition for pretty much the entire late twentieth century, and not just because of the drugs (we had our own doctors for that). Look what happened in the 90s when the training techniques, synthetic hormones and statistical analysis used for decades behind the Iron Curtain finally infiltrated a sport as truly reactionary and deeply American as Baseball? Break out the rye bread and the mustard, grandma, it’s grand salami time!

So much for historical periodization, the sports periodization training techniques are what we’re after. Here, periodization means a model for efficiently planning training to achieve defined goals developed by L.V. Matveyev and other Soviet doctors, physiologists, coaches and athletes starting in the 1950s and better known in the West through the work of Romanian Olympian and coach Tudor Bompa and his Theory of Methodology and Training. (That the concept was developed and elucidated by historical materialists might explain the possible confusion of terms.) It’s based on Hans Selye’s General Adapatation Syndrome (GAS) model of how the body copes with stress, the periodization model is a method of planning training around cycles of work and rest and a progression from general to specific skills in order to maximize the rate of improvement and to peak at specific times, typically for competitions.

Selye’s model of stress rests on the foundation of physiological homeostasis — that the organism, generally, is always trying to cycle back in diminishing loops to an ideal balance. When stresses threaten to knock that out of balance, the organism responds first through Alarm, like pain signals or a triggered sympathetic nervous system; then through Resistance, or adaptation through successful coping mechanisms like muscle growth; and possibly to overwhelming Exhaustion. Positive, or benign, stress within the range of coping mechanisms he later termed “eustress,” while “distress” refers to persistent, negative stress at or past the point of exhaustion. The goal of periodization is to keep the body at a stage for optimal adaption to the stresses of the chosen activity, with workouts designed to ease past the Alarm stage while stopping short of the Exhaustion phase.

In reality, Ivan Drago’s steroid-fueled teammates were actually winning on the field.

While it’s now considered an overly simplistic and linear model, that doesn’t mean it isn’t effective. It still does better in trials than alternatives, and it’s the theoretical foundation for almost every basic fitness regimen today — or at least the fitness regimens moderately complex enough to have a theoretical foundation at all. This includes introductory programs like the popular Couch to 5K model for people fit enough to walk without pain looking to pick up the pace and start running.

The structure of a periodization cycle generally works in micro, meso and macro cycles. A typical micro cycle for amateur athletes is one week. A meso cycle would represent a “phase” of training, or block of microcycles targeted to specific, progressive goals. And a macro cycle would be a group of mesocycles designed to achieve overreaching goals, like peaking for an event. In the Soviet system, periodization was used for entire careers, peaks forward planned years in advance to coincide with major international competitions like the Olympics. 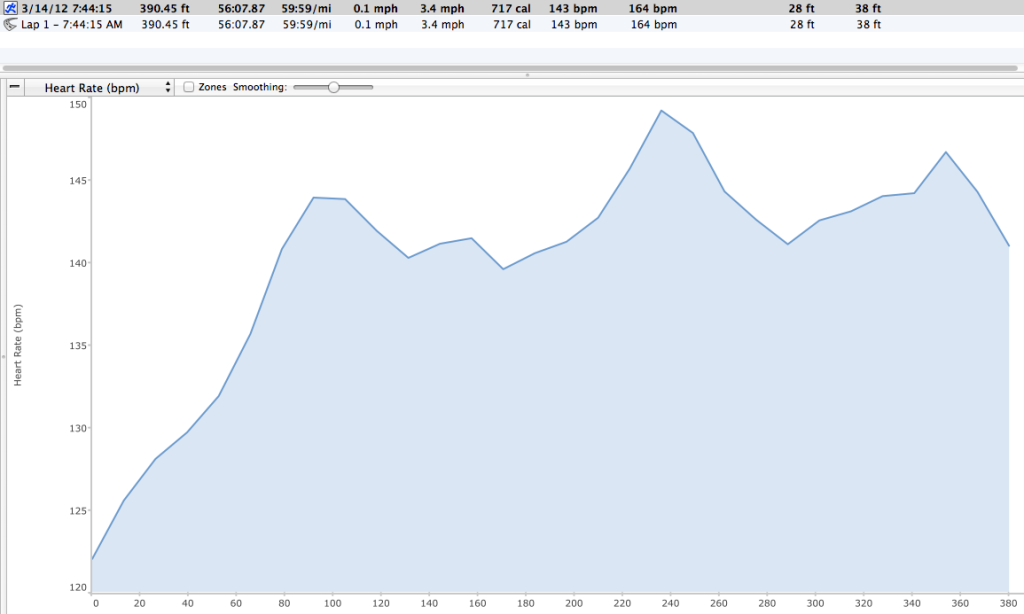 A typical spin class workout from 2012 shows my heart rate graph as it rose and fell during interval periods of work and rest over an hour.

While living in the relatively privileged if sheltered and restrictive bubble of an East German Olympian and being able to to fit in microcycles as small as specific sets within multiple workouts in a day makes that sort of strictly linear periodization somewhat impractical, a modern amateur might look out along a similar scale to peak the first year of a five-year age group cutoff or do lots of small resistance or range of motion exercises throughout a workday to accommodate a busy schedule and multiple events — making undulating periodization cycles a more flexible alternative.

Calories burned over the course of the four week-long macro cycles to illustrate the pattern of cyclical intensity.

A typical microcycle designed by my coach when I was focusing on triathlon training would be structured with two bike rides, two runs, two swims, two strength workouts and a brick (ride-run) or race — in my case, Iyengar yoga. Tuesday would be a relatively easy morning run and evening yoga. Wednesday would be an intense morning spin class and evening intervals in the pool. Thursday would be a longer run with more intense intervals. Friday would be a long swim in the Bay. Saturday more yoga and was a long bike ride with plenty of hills and then on Sunday the “brick” or a ride about as long as the swim and ride portion of a race, followed by a relatively brief run.

The calendar of workouts from the same month as above, leading up to the 2011 San Francisco Triathlon at Alcatraz.

Starting with the Monday rest day, the workouts are generally brief but build from less to more intense, peaking with Wednesday spin and the Thursday tempo run to push my VO2 max and build fast twitch muscle fiber. Starting Friday, the workouts get longer but less intense, to push my aerobic base and develop slow twitch muscle fiber. The goal was to improve my aerobic fitness, body composition and overall strength while working on specific triathlon skills like swimming in open water, the transition from bike to run and riding in aero position, specifically. The yoga classes I chose followed a consistent format, and I generally applied myself to working on flexibility more if I was stiff or weak and strength more if I already felt pretty strong and capable that day.

Progressive cyclical intensity for a macrocycle illustrated over the three months preceding the same Alcatraz race.

Over the course of multiple microcycles, my mesocycle would essentially add marginal increases in the intensity or length of the individual workouts. At the beginning of a mesocycle, baseline readings of heartrate and pace were taken. These were then used to compute the heart rate zones for the purposes of calculating target workout intensity. If you were periodizing a lifting program, you might do an olympic lift to exhaustion (one repetition maximum) and then dial that weight back to something you could do ten or fifteen reps of. Then increase the weight and decrease the reps over the course of the cycle. In the recovery stage between workouts, your body will overcompensate for the stress experienced in order to more easily withstand the same level of stress while remaining in balance. One of the revolutionary aspects of periodization was its acceptance of rest and relaxation as a critical part of peak performance.

In the Soviet system, periodization was used for entire careers.

Mesocycles will also go from more general through the preparation phase to more specific approaching the competitive phase, and the brick workouts would become community races in the suburbs. Then a new baseline was taken and all the workout intensities recalibrated. Mutliple mesocycles formed the preparation phase of the larger macrocycle over six to nine months, building into a longer competitive phase to maintain those gains throughout a three month race season of premiere events. That’s followed by a transition phase, where “active rest” might include light, sport-specific workouts and addressing weaknesses (such as injury recovery) as well as more general crosstraining and, you know, just enjoying the feeling of being so goddamn strong and lithe and healthy.

Modern systems are often much more nuanced, and thanks to the increasingly inexpensive biometric devices and sophisticated software once only available to the Party elite that allows for more rigorous baselining and metric analysis, your program can be fine-tuned on the fly — since trying to follow a strictly linear progression from the pages of a textbook can just as easily lead to over or undertraining as no planning at all. Escape from Alcatraz legend Andy Potts and his coach rely on “feedback training,” where the goal is to monitor stress induced by training much more closely, though with the same ultimate purpose of maintaining the body in the resistance and recovery stages while avoiding alarm and exhaustion.

So in the end, the details of any periodization program should ultimately be up to you, in consult with a coach, trainer or doctor — all of whom can help you define goals and set limits to build your plan around. Hopefully a discussion of some of the principles should also help make sense of the workout and exercise suggestions they give, or which come generated from apps and other guides. And like Ivan Drago (or Andy Potts), use baseline tests and metrics to both track progress and stay within your boundaries — pain does not necessarily equal gain. If anything, the goal of periodization is to work smarter, not harder. Never Rocky’s strong suit.