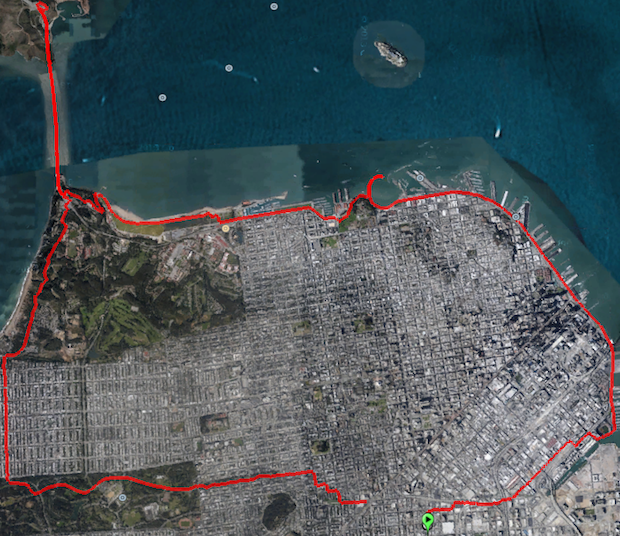 To the nearly 10,000 participants in Sunday’s Oakland Running Festival, congratulations on a great day for a run! If you’re already jonesing for another rush, there are 82 days left until the San Francisco Marathon on June 16th, just enough time to fit a periodization cycle in. For anyone else who’s already paid their registration fee, it’s time to start titrating your training doses up to build your tolerance for chasing the dragon.

When last we spoke of marathons, I was just getting underway with training for the California International. Those hopes were dashed, and not by the rain in Sacramento that weekend. But with help from the fantastic teams at the UCSF Orthopaedic Institute and Potrero Physical Therapy, I was back on my feet in time to pick up where I left off, running the San Francisco Half Marathon in February followed by the LA Marathon earlier this month. And while I didn’t qualify for Boston in 2014, I got pretty damn close!

Seriously, the best way I’ve found to mitigate the pain of endurance running is to endure less running by going faster. How’d I do it? Physics! (I mean, hard work and cleaner living, really, but nobody likes that answer.) Just like modifying a stock car, if you improve your power output relative to the weight you have to move, your speed will increase. Thankfully there are a lot of ways to gain marginal efficiencies on both counts, often at the same time! Losing ten pounds of muscle mass in your upper body through atrophy, for instance. Or cutting down on a pack-a-day-plus tobacco habit by switching to e-cigs (which may necessitate a column name change to “Vapin’ Fast,” but I digress). I highly recommend the latter, not at all the former.

For the love of goodness, I don’t care if you lose weight. You’re beautiful! Don’t change. What’s important for our purposes is your body composition, anyway. Assuming you do have some fat to spare — especially visceral fat — you don’t really have to worry about going fast during training. Just do the work, eat well and if you lose any significant weight you’ll be faster than when you started! It’s almost inevitable, especially if you’re just starting out from a low base activity level.

What I mean by “do the work” is to put in the miles on whatever training program you’re on and build your “aerobic base.” This would be training in the range of 60-70% of your maximum heart rate (breathing hard but able to maintain a conversation) consistently over the distances set out in your program. In this range, your body can burn fat fast enough to keep you going even in the absence of easily available blood sugar, so you couldn’t “bonk” if you tried, and it encourages the development of less powerful but much more energy efficient slow-twitch muscle fibers.

Just do the work, eat well and if you lose any significant weight you’ll be faster than when you started!

Great routes for working on your aerobic base are along the aforementioned Embarcadero and then Marina Green and Chrissy Field — excepting the hill behind Fort Mason, as flat a stretch of mileage as you’ll get in all of San Francisco City and County. Just by building up your basic tolerance and burning hundreds of calories an hour for ten hours a week (assuming you’re not replacing all the calories immediately with sugar and ethanol), you will become lighter and therefore faster. Also? Your joints will thank you.

Another great way to work on your overall fitness is through cross training — specifically, low impact cross training. These include aerobic activities like cycling, anaerobic activities like resistance training and overall balance and flexibility exercises like calisthenics. Many or all of the benefits from these other activities translate to running, and vice versa, so with low impact options (i.e. yoga instead of weights or cycling instead of tennis) you can work them in regularly as recovery sessions, and intermittently whenever the discomfort from inflammation might otherwise keep you from working out, thereby continuing to make some gains without as much strain.

If you’re already in a competitive body composition range yet want to go further, things gets much, much more complicated. If I lost more than five pounds of fat, I’d start getting close to Anorexia Athletica territory while being “overweight “according to the body mass index (BMI). Tools like the new, relatively inexpensive Withings WS-50 Smart Body Analyzer scale become very useful, nutrition gets a lot more important, and if you haven’t spoken to a medical professional about your fitness regimen and goals yet now is the time to start.

Now by power I don’t mean raw strength — which is somewhat important, and I’m pretty sure Tim at Roving Athletics would be right if prescribed me more squats, which he usually does — but the goal here is not to develop lots of kinetically explosive but calorie intensive quick-twitch muscle fiber for a few strong pushes. Instead, think ruthless efficiency through developing slow-twitch muscle fiber and compounding marginal improvements over time. Your heart is a muscle, too, and the stronger it gets the quicker you can go at the same heart rate! But if you keep it beating too fast for tool long, triggering your sympathetic nervous system into flight mode too often, you’ll risk overtraining and all the motivation-destroying physical, mental and emotional exhaustion that comes with it. So again, there are limits! Push them carefully.

But once you’ve done enough aerobic base training to the point of being confident that pretty much no matter how far out you run you’ll be able to get home, it’s time to start picking up the pace and getting intimate with those limits, qualitatively and quantitatively. This is where an electronic heart rate monitor with a live readout becomes really useful, but if you don’t have money for one of the new Basis watches, you can use a smartphone app like Cardiio or just do it the old-fashioned way.

Your heart is a muscle, too, and the stronger it gets the quicker you can go at the same heart rate!

You’ll want to find out your maximum and minimum heart rates — through stress testing and taking your pulse first thing in the morning, respectively. If you don’t have a heart rate monitor, you can calculate rough and ready estimates. The folks at UCSF RunSafe lab will use the traditional graded treadmill test to achieve the most accurate results — and give you a lot of other incredibly useful baseline data while they’re at it.

What is lactate threshold? No, it’s not the point at which you begin oozing anything out of your nipples. It’s the point at which the amount of lactic acid your muscles are producing outstrips the ability of your body to metabolize it, causing it to build up in your blood stream where it will be felt as fatigue. The good news is that even if you exceed your lactate threshold for a few minutes trying to beat a stoplight at an intersection, the excess acid can be broken down while on the run if you back off in time. In fact, your body only breaks down lactic acid when you’re working out, which is why the best thing for sore muscles after a run is, well, a marginally easier run — or, as I mentioned, a bike ride.

The short bursts, or intervals, allow your body to momentarily exceed its current capacity and train not just your muscles but eventually your metabolism to be more efficient. It will also teach you what it feels like as you approach and exceed the threshold so you can better regulate yourself to stay in that sweet spot during an actual race, even as elevation and weather conditions conspire to increase your heart rate at a given pace. And doing heart rate zone intervals on a bike achieves nearly the exact same results in training the heart and diaphragm muscles but with significantly less joint wear.

So that is the basis of all speed work, from Fartlek “run play” to hill sprints. My regimen combined short recovery and long aerobic base runs in zone one and two, fewer long runs near or at lactate threshold in zone three, and just a few days of fast mile and fast half-mile intervals above zones four and five. For the speed work, I really enjoy running fast laps on the track at Kezar, but any relatively flat stretch will do. For hills, Bernal and Telegraph are both so steep you can’t help but push up to lactate threshold even at a walk. Or truly brutalize yourself with a zone four run up to Twin Peaks and then zone five stair sprints to summit each peak, pausing only to stop for the obligatory Instagram post.

A little investment in discomfort up front can really pay off in beating the line to the free massage booth at the finish for real pain relief. And on that note, in our next installment we’ll discuss race day strategy and tips for travel arrangements, menus, buffet etiquette, pretty outfits and the like. Until then, don’t plug your earbuds in to start streaming DJ mixes from Soundcloud or forget to keep your head on a swivel while navigating your way through a city known for being particularly dangerous for pedestrians! While tragedy certainly does heighten the drama, the whole point of theater is to experience the thrill of catharsis without really having to play for such high stakes.

This is the long-delayed second installment in a Smokin’ Fast series on marathon training. You catch up with part the first, How to Stage Your Dramatic Marathon Production or continue on with part the third, Marathon Finishers Keep Calm and Carry On!