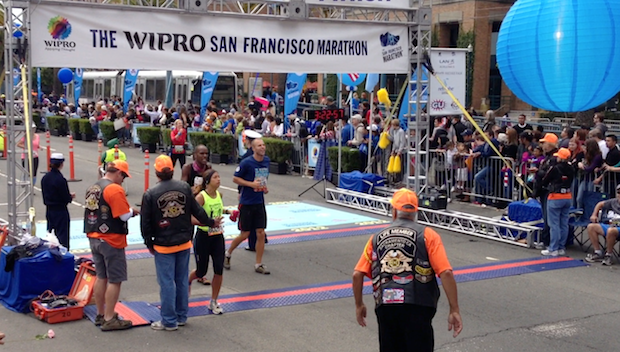 At least one heckler in the audience at the DNA Lounge last Friday for Hunky Jesus: The Second Coming shouted “too soon” when I showed up on stage in my Marathon Jesus costume, a look I’d been preparing since before the Easter festivities which were cancelled by high water.

Having anticipated catching such hell, I did have a backup schtick prepared just in case (Basketball Jesus, captain of the Jerusalem Watertrotters), but I figured if we learned anything from the tragic bombing of the Boston Marathon it’s that commitment and perseverance are skills every distance runner has to learn. And besides, if I’m too scared to trot out in front of the catty crowd at a sacrilegious beauty pageant wearing nothing but a bed sheet loincloth, a discount wig and a pair of used Birkenstocks, then haven’t the terrorists won?

Point is, even after months or years of training, you can’t prepare for every possible contingency or guarantee a positive experience on race day. And ruminating over worst case scenarios or attempting to address weaknesses in your fitness, real or perceived, by cramming at the last minute will only work against you. As you taper off your work load, it’s time to stop struggling and start relaxing. As I was taught in my screenwriting classes at film school, the villain is the hero of his own story. Meaning that if you’re greedy for glory, you’ll just end up your own worst enemy.

The good news is that assuming you’ve stuck with your program, the hard physical work is already done. While the actual race course will probably be four to six miles farther than your longest training run, thanks to the rest break afforded by your taper, the morale boost from the event atmosphere and the help of aid stations, it should actually be somewhat easier or at least more comfortable than your training experiences. I started running after I quit drinking, and so I run like I drank — making race day an excuse to treat myself and indulge in a truly lavish binge, or the health and wellness equivalent to a weekend of hookers and blow.

As I learned in my many years of practicing alcoholism, the only way to go on a risk-free bender is not to go on one at all. A marathon, particularly a fast one, will cost you! But there are some harm reduction steps you can take to minimize potential negative consequences. Let’s take a look at how you can vanquish some potential foes as this, the third and final act in your epic, plays out:

If I’m too scared to trot out in front of the catty crowd at a sacrilegious beauty pageant wearing nothing but a bed sheet loincloth, a discount wig and a pair of used Birkenstocks, then haven’t the terrorists won?

Assuming you’re on a periodization cycle, the next few weeks will probably represent the peak stress load — including your longest runs, more effort near or at race pace, and brief but intense intervals for pushing your aerobic limits in speedwork drills. It’s during these workouts that you should be closely monitoring your performance, since they’ll form the basis for realistic estimates of your probable pace on race day. This is also an opportunity to shake out your nutrition and hydration strategies and break in any new gear, especially shoes. And if you need to make travel and lodging arrangements, now is the time to finalize them.

As we discussed last week, one of the goals of periodized training is to start by developing general fitness and finish by working on sport-specific skills. For instance, early in your training you might have worked on aerobic capacity with cycling workouts, improving your core power through strength workouts and increasing lower body flexibility with stretching exercises. But by now you should be thinking of each run as a dress rehearsal, and doing your best to simulate race conditions. For instance, start progressively waking up earlier to nudge your sleep cycle towards where you want to be on race day; find a stretch of road with a similar elevation profile to the race course; wear the outfit and carry the gear you plan to bring with you; and finally, check the pace you plan to run against the heart rate you know you can maintain.

Your physical preparation is basically complete at this point, or at least, there’s nothing you can do to improve your fitness but rest. Of course, by now your body is used to the rigors of training, and there might be a bit of withdrawal to deal with. That’s often potentiated by a “caged animal” sensation as your body heals and your strength and enthusiasm recover. What runs I do enjoy in this week are generally focused on practicing easy starts, making a conscious effort to dial back my speed to moderate any adrenaline rush induced by a mass start. Spending even marginally more energy than necessary at the start can cost you dearly towards the end.

If you’re planning on carb-loading for the race, now is the time to start. The idea is to begin increasing the proportion of your daily calories that come from carbohydrates in order to help your body store the maximum amount of glycogen in your liver and muscles. You’ll want to continue eating plenty of protein to help your muscle recovery, and focus on “good” carbs relatively low on the glycemic index, which you’ll increase the marginal proportion of calories from meal over meal leading up to the traditional pre-race pasta dinner. This is also when I start to taper off my caffeine intake to reduce my tolerance.

Just like they teach you in an SAT prep course, the most important night of sleep is the night before the night before the race. One way to sleep well is to make sure you’ve treble-confirmed all the logistical details for the next 48 hours, including packet pickup, travel to the race start, and where to rendezvous with your friends and family after the finish. Of course, a carb-heavy meal with some decaffeinated coffee and a diphenhydramine chaser for dessert might also help ensure an early bed time.

The day before the race should be as restful and uncomplicated as you can manage. Catch up on emails from race organizers, make sure you have your packet from the race expo with your bib number and timing chip, and assemble your gear in advance so that you won’t have to look for anything at the last minute. Enjoy a massage! Soak in a hot tub! Have some sex! (Though don’t eat anything rich until after the race.) Seriously, you’ve literally been pushing the limits of the amount of stress your body can cope with for months, so your goal is to arrive at the start as relaxed and refreshed as you can manage.

Having put any logistical concerns to rest, and with your body as fit and fresh as it’s going to get, it’s time to forget that it’s a special day and just stick to your routine. For my first marathon, my daily routine still meant coffee and cigarettes, and so I enjoyed two cups of the former and four or five of the latter before the gun went off. I’ve also been known to make up to three stops at the porta-potties, just to minimize the chance of any messy surprises. The most important thing, though, is to be properly hydrated. Personally, I like to show up to the start corral with a mild urge to pee, meaning I’m just a little more than topped off. The urge will abate after a few sweaty miles. Trust me.

Why did I suggest practicing slow starts? Because in a throng of hundreds or thousands, with everyone excited and nervous, it is very difficult not to get caught up. And even if you do pace yourself, you’ll inevitably spend extra energy just navigating through the crowd. Your goal should be to establish a comfortable stride, relax into your form, and ease toward your target heart rate. You only have so much anaerobic capacity in your muscles to spare, and you’re going to want to save as much of it as possible for the end. Also, any excess lactic acid generated early on will linger throughout the race, causing discomfort and limiting your margin of error. 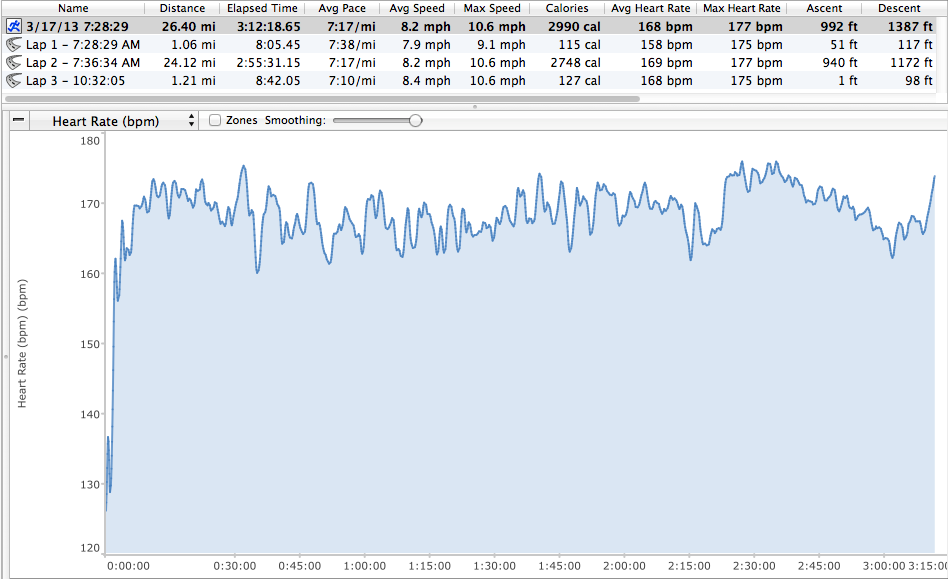 Personally, I try to pay as little attention as possible to my pace or time during the race, and focus exclusively on heart rate. This way I can measure myself against the same number whether I’m going uphill or down, and that my effort isn’t exceeding the lactate threshold, meaning my body can metabolize the lactic acid at the rate it’s being produced by my muscles. Additionally, if I catch myself struggling or pushing, I focus on breathing and a relaxed posture. You don’t want your sympathetic nervous system triggered and your adrenaline raging through the race, because it will just keep your heart rate artificially high, fry your nerves and leave you no reserve of energy and motivation for the finish. (That said, mile 22 is a great place to relapse on caffeine.)

I also take aid at every station, and choose the sugar- and electrolyte-spiked sport drinks over water whenever possible to avoid cramping and hypernatremia. While you can’t stay perfectly hydrated throughout the race, you can slow the rate of dehydration to keep your body in a functional zone. The same goes for calories — you start with an initial buffer of stored glycogen from your carb-loading efforts, but that will be gone in 60 to 90 minutes if you don’t choke any more down. I believe I might well have broken 3:10 in my last attempt if I’d been better prepared with 200 calorie Gu packets, and plan to carry at least six for my next effort, to be consumed at the 10k, 20k, 25k, 30k, 35k and 39k marks.

You’ve done it! And even if you haven’t, great effort! Now keep moving — remember, your body only metabolizes lactic acid when your muscles are working. You’re also at some risk for exposure as your wet body cools down, hence the space blankets. And you’re likely dehydrated — in fact, you’ve probably lost a significant amount of weight since the start of the race. So dry off, warm up, stretch out, walk it off and take on fluids and electrolytes. And just like after any training session, you’ll want to consume some protein within a half hour to help your muscles recover maximally.

Now go forth and treat yo’ self! Like, feel free to wear your medal everywhere so that no matter what you do, everyone will be extra impressed because you did it after running a marathon. You won’t notice how much it hurts to navigate stairs until tomorrow, by which time everyone you know will already be tired of hearing about your heroic victory and want to know when you plan to take the trash out. But that’s okay, by the time you’re wincing down the steps to the garbage bins, you’ve probably already come up with half a dozen ways to go a little faster next time. Maybe even qualify for Boston someday.

This is the third installment in a Smokin’ Fast series on marathon training. Catch up with part the first, How To Stage Your Dramatic Marathon Production and part the second, Improve Your Marathon Performance By Taking Regular Rehearsals And Ruthless Reviews In Stride!