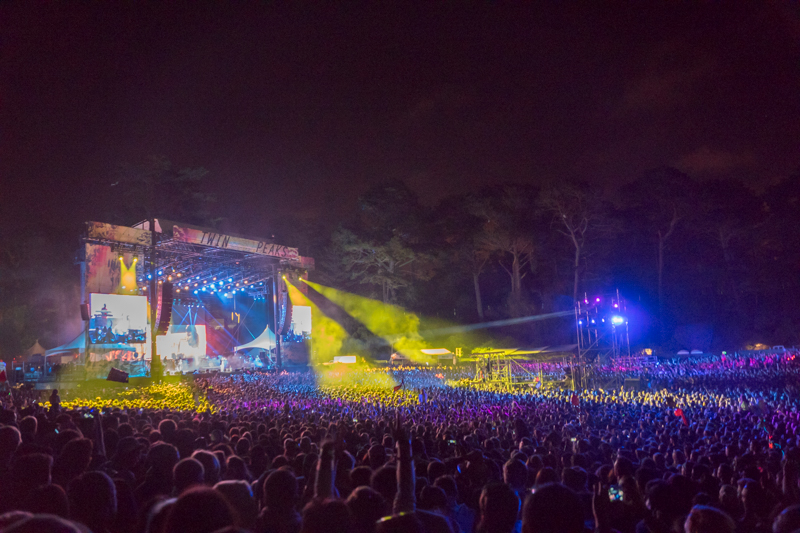 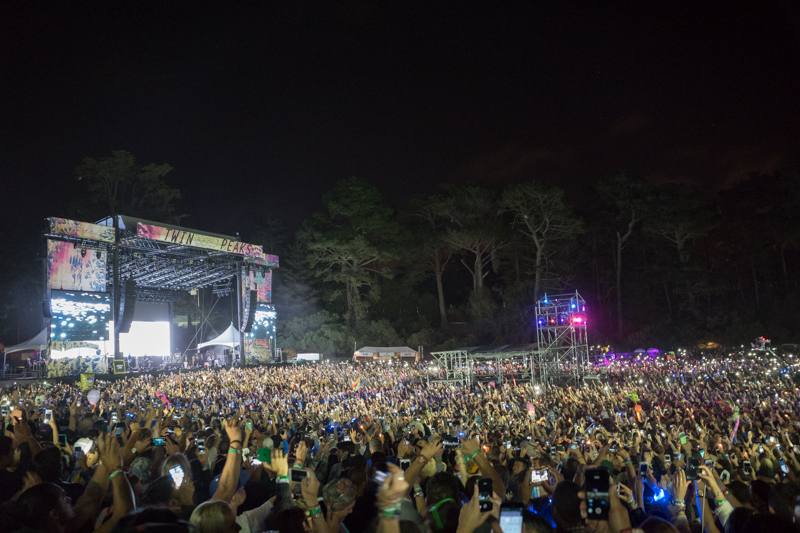 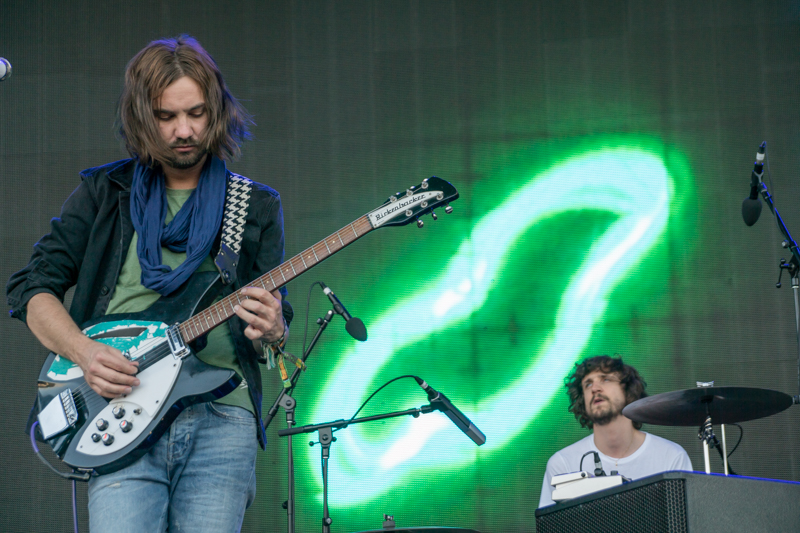 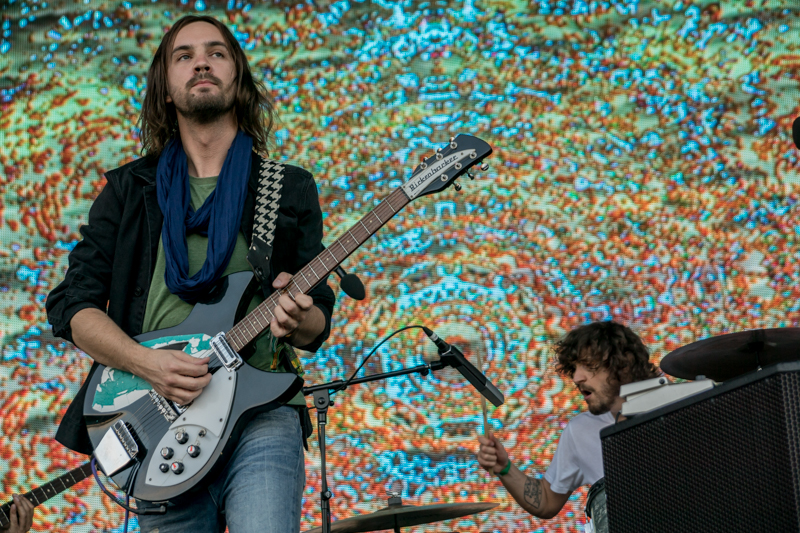 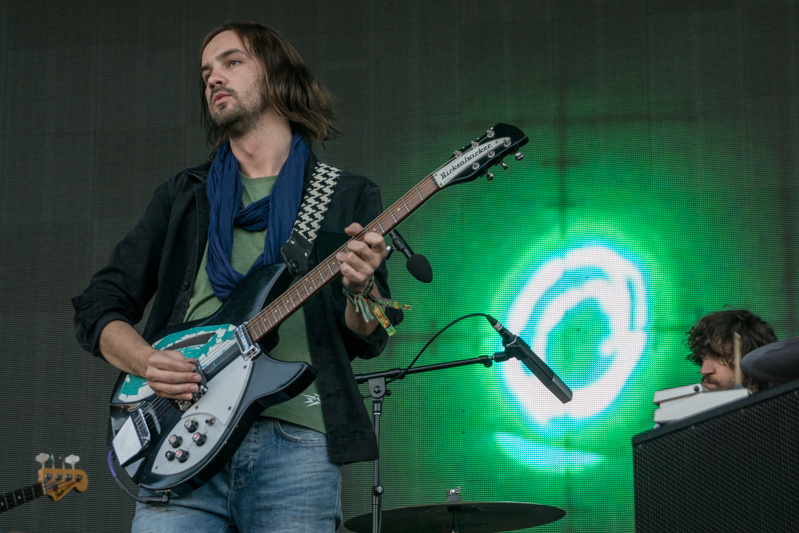 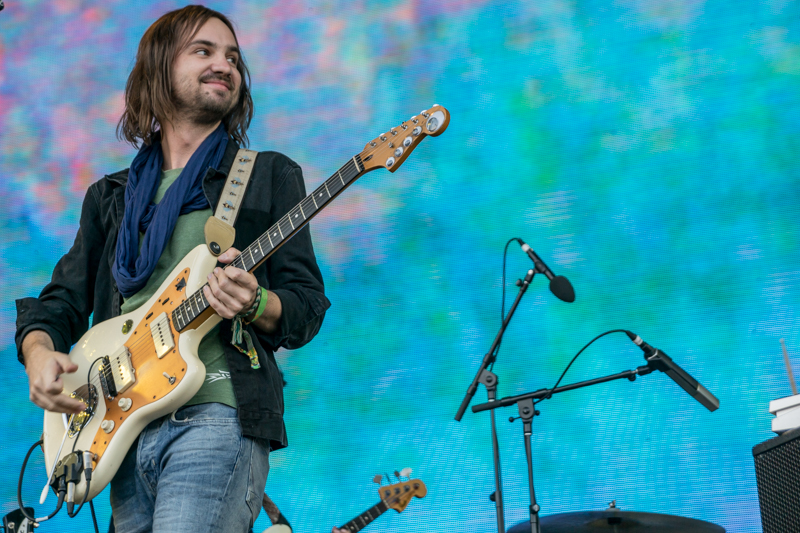 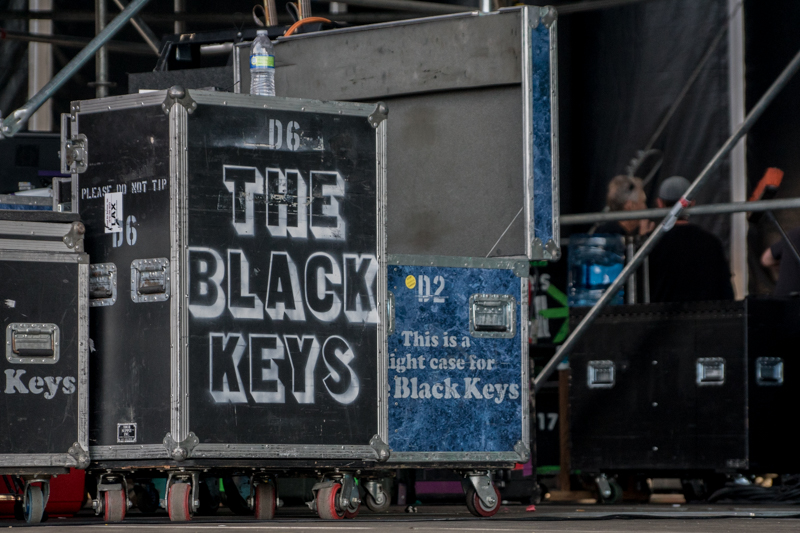 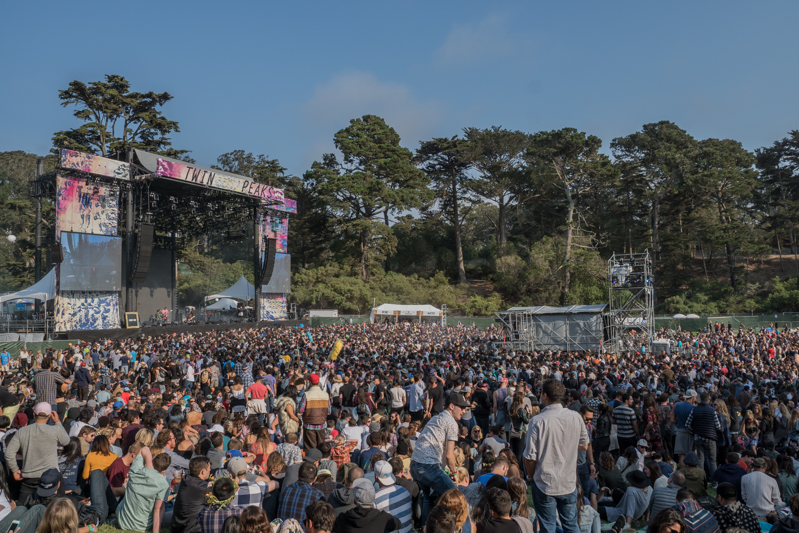 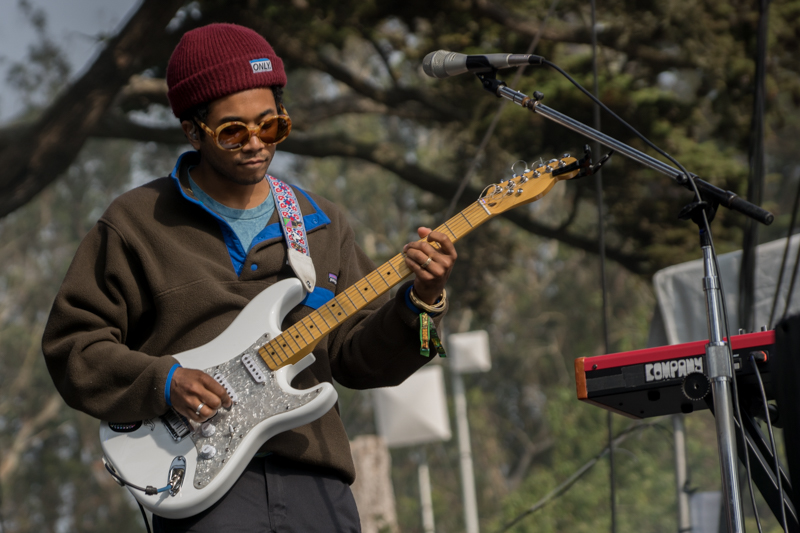 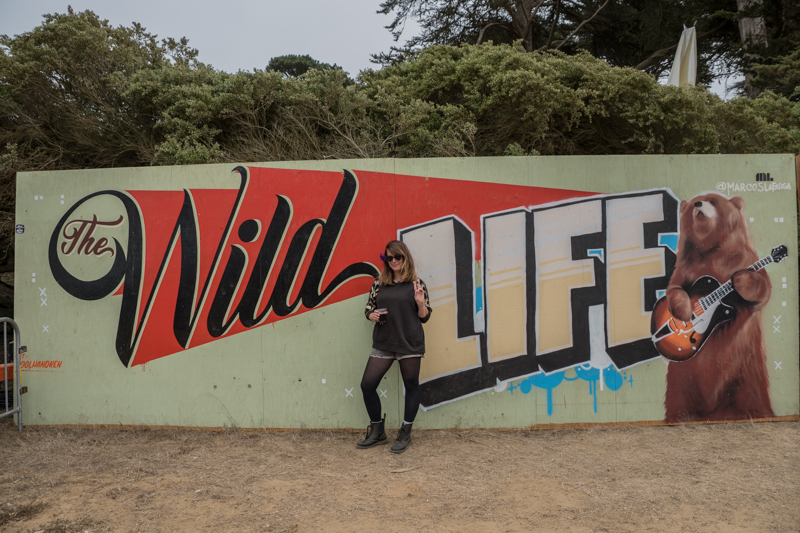 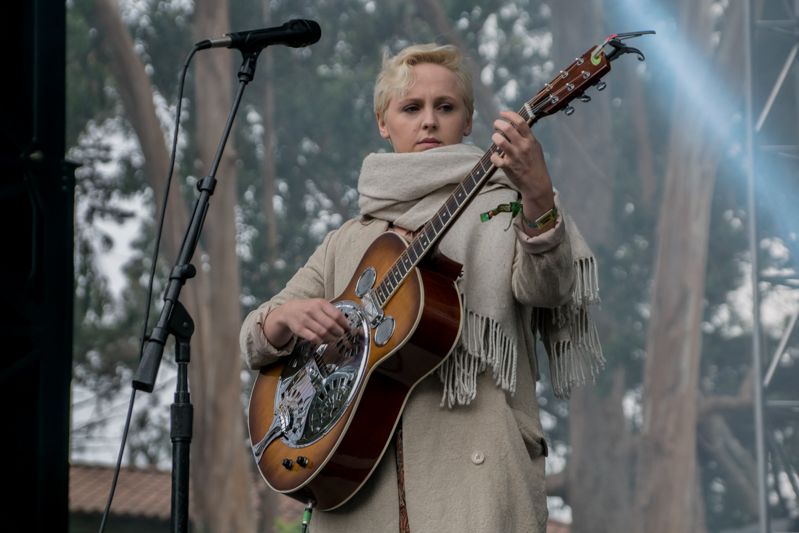 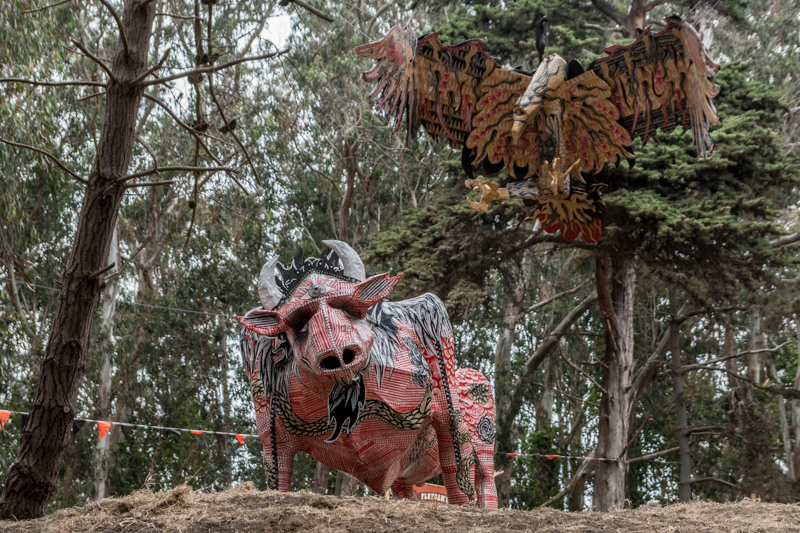 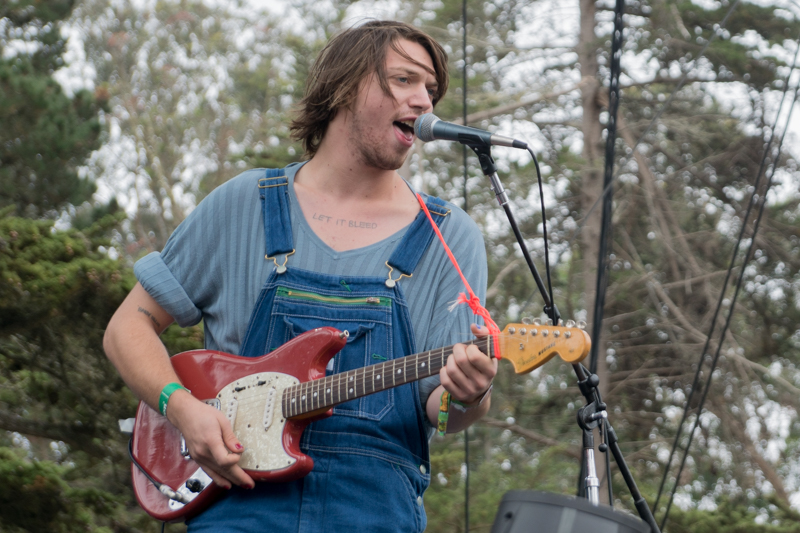 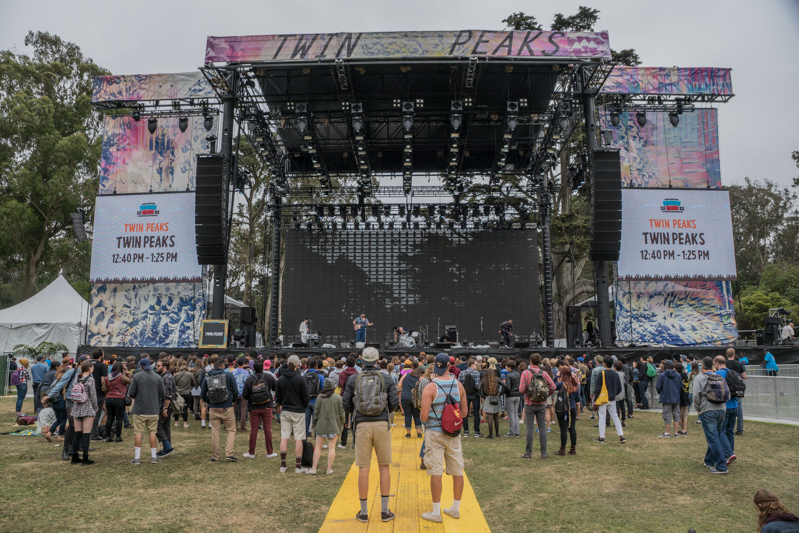 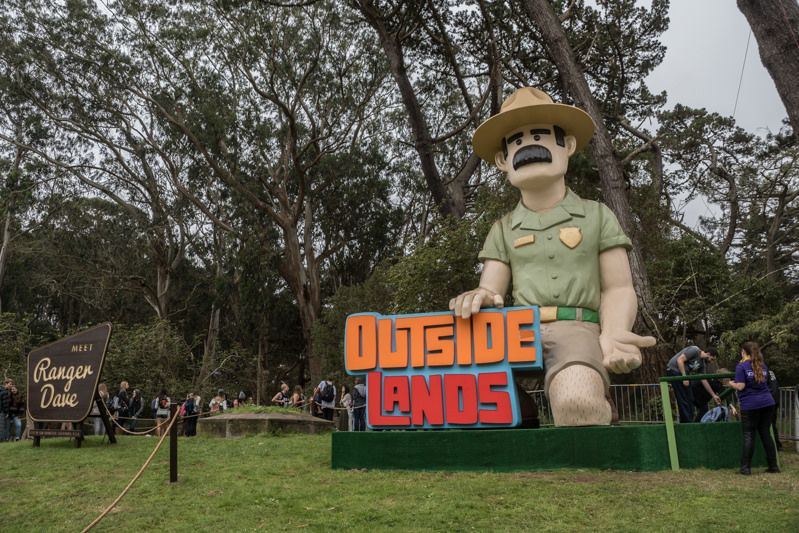 "edgy, gritty, dark, goth, psychedelic." – Someone on this bus must be thinking of rebooting Small Wonder for television. #outsidelands

“Let’s get this party started!” The man in the aqua tie dye shirt, wooden bolo tie, flat cap, and baby mullet says right into my eyes as he flashes me his pipe and baggie of weed during Tame Impala’s Lands End set today at Outside Lands 2015. He prepares to pack his bowl, fiddling a couple of times before deciding to play air guitar along to the band on the main stage instead.

It was an innocuous enough statement. Bordering on benign, even. Maybe the day had dragged on, and I was at the point where I went from “I’m at a festival!” to “I’m at a goddamn festival.” Maybe True Detective season two taught us not to trust any man who wears a bolo tie shirt. Maybe because he was right. Tame Impala took the stage at 6:30pm and the sun made a triumphant return an hour before for Billy Idol. The day was cloudy and chilly for most of the day (with light showers in the morning when the gates opened for the day). I felt that Tame Impala’s psychedelic rock hit an inflection point for the festival. Booze has been flowing, drugs passed around, the sun was out; now we were at a festival.

Golden hour sunlight started to hit as Tame Impala’s last guitar swells from their encore engulfed the Polo Fields. Their mere booking on this year’s card (aside from a new album, and that damn song on that Audi commercial) felt like the justification for half of the attendees so far at Outside Lands dressing like people that would be featured in a sex positive book published in the 70’s. The people are looking for a moment and we’re starting to encroach this moment. The kind of moment that Instagram filters try to recreate. The kind of moment Spalding Gray talked about in “Swimming to Cambodia.” The selfies taken during this moment in time could be used in a Father’s/Mother’s Day post 25 years from now, with the kids of those here today saying “my dad/mom was a hottie back in the day” and their friends saying that yes, your dad who got super high, slapped on some wayfarers, a pork pie hat, and tank top with a graphic of Saved by the Bell’s Kelly Kapowski on it at a music festival 25 years ago was hot.

I’m getting ahead of myself.

Outside Lands is a grand level house party, where if you keep moving you’ll find some place comfortable to spend some time. This also made it easier to parse out in my head. The Panhandle and Twin Peaks stages in Hellman’s Hollow felt like its own auxiliary festival, so I could easier contextual on its own, away from the Polo Fields (which feels like the most stereotypical music festival scene in my head), and McLaren Pass feels like we were partying in the home of the inhabitants of Fern Gully. Outside Lands is a an unofficial double XP weekend for Fitbit users.

For much of Saturday morning I ping-ponged between Panhandle and Twin Peaks, the dueling stages made it easy for me to keep moving and not feel stuck (or hemmed in on the Polo Fields). I deduced that I had to keep moving at Outside Lands. I wouldn’t die like the shark myth, but I knew if I stopped and started to think about that I was at a goddamn festival, it would only mean sad head times. Here are the bands I saw between Panhandle and Twin Peaks on Saturday:

Heartwatch
Well, when I hear any female fronted indie-pop I come running (which I did do, running from McLaren Pass into Hellman’s Hollow). The crowd was holding up sunflowers from Eco Lands, and the audience showered the band in sunflowers to show their admiration. That was goddamn adorable and made my heart grow a size for a couple of minutes.

Twin Peaks
Twin Peaks played at the Twin Peaks stage, and while being a bit on the nose, one member of the band was in overalls, and their keyboardist was in a bath robe, so it was cool. It also helped they were a 90’s alternative throwback (when alternative still meant something) taking cues from the Pixies and Pavement. Raucous.

Devon Baldwin
One-woman pop singer with a guy in the back controlling beats; Lana Del Rey without the existentialism? Her set started a bit late, and had to end on time. She did however cover Blink-182’s “Don’t Leave Me” which I enjoyed along with a waffle stuffed with fried chicken.

Unknown Immortal Orchestra
This was buzzed about in the press tent during Outside Lands, and how they are on the verge of breaking out. They were a jam band bouillabaisse, lots of funk and noodling around. Peak ‘sit on a blanket on a grassy field during a festival’ festival music.

Waters
For some reason I thought/wanted Stars to play because their mic stands and instruments were covered in flowers, which I know Stars does. My favorite band during the day, the SF-based (and tie-dye clad) Waters plays the kind of four-on-the-floor, boy-girl alternate singing yeah-yeah-yeah-whoa-whoa-whoa-clap-clap-clap music I am a sucker for. I’m a simple person, really; just give me a beat that I can sing along to. Their set included a cover of Taylor’s Swift “Blank Space” (which I sung along to while drinking coconut water out of a freshly cut coconut, peak Outside Lands), and their keyboardist throwing pinatas into the crowd.

Shoutouts to Outside Lands for giving me new music to listen to, and not needing to wait for best-of year end lists.

Making my way towards Big Freedia’s beignet brunch, I managed to hear Mac Demacro scream and repeat WHY CAN’T WE GET ALONG from the Lands End stage. Big Freedia’s return to Outside Lands for brunch with Brenda’s Soul Food on the Gastro-Magic stage was magnificent. Much more crowded than last year, I did feel guilty like we were taking advantage of the hospitality of the inhabitants of Fern Gully. Freedia’s set was only thirty minutes, so in lieu of songs, it was predicated more on melodies to help facilitate maximum ass shaking and ass air time. It is probably only the third time in my life I’ve heard air horns used unironically. A random audience member got pelted in the face with a flying beignet leaving behind powdered sugar. A beignet bukkake, if you will.

It was around this time that I started to see an epidemic of people start pissing in the woods. And I heard a story of someone running into human shit. A slight fear began to germinate that this was the start to the breakdown of festival civilization. Or my lack of festival experience completely betrays me. To those people I say, you’ve lost the right to complain when SF smells like piss or you run into human shit during your walk to work. But Christ, you’re turning Golden Gate Park into a literal toilet (and not in the thinkpiece-y, ‘has tech ruined San Francisco’ way either).

You are defeating the purpose of the Porta potty if you're just going on it, not in it. #outsidelands pic.twitter.com/wM78m0qLqd

Shoutouts to Billy Idol’s workout regime and/or his personal trainer. Lord knows if he doesn’t look like he’s having fun out there. New disco duo Classixx closed out Panhandle as I was drinking chicken broth from Wise Sons while finding a pocket of space to dance by the sound booth and I knew Outside Lands had become a “festival.”

The Black Keys closed out Twin Peaks for the night, and The Black Keys did what the Black Keys do which was slightly disaffected (but still fun) two-man arena rock. All we needed was a non-douchey TED talk, and we would have had what the people who put on Hustle Con were trying to do.

Kendrick Lamar was dense, with the crowd going all the way back from Panhandle. He gave a commanding performance for the night, earning the voice of a generation plaudits. The booking of Kendrick Lamar and The Black Keys felt like the separation between the tank top festival crowd and the horn rimmed glasses festival crowd.

One more day, just keep moving. Or just remember that the Outside Lands volunteer at the gate told to me stay fun as I was leaving for the night. Stay fun, Ponyboy.