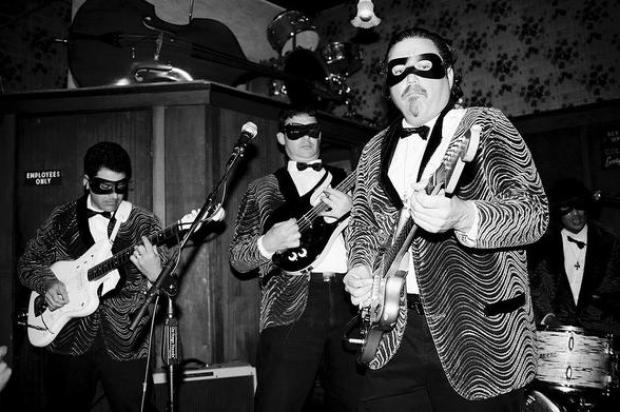 Happy Halloween, everybody! I’m going as a dying industry on a new platform that further devalues its legitimacy. I mean, I’m in pjs writing this here show recommendations list. Carry on with the crazy high you’re riding from the Giants’ World Series win and combine that with some awesome aural festivities at these three Halloween-themed shows. I’m not saying you should go to all three (unless you have the drugs for it) but a stop at the Haunted Hoedown tonight and maybe the Total Trash Halloween Bash tomorrow wouldn’t hurt.

The fifth incarnation of this folksy fete primarily showcases Bay Area bands but it’s the pseudo-supergroup of Surf Bored that will be the act to watch this evening. Composed of Athens, GA heavy-hitters from the Tumbleweed Wanderers, the Woodgrains, and more, this quartet is probably offering the most interesting beach-soaked interpretation of an overused genre. Hell, they don’t even care if you actually surf or if you’re not bored, which you shouldn’t be. Hometown heroes Rin Tin Tiger headline the festivities. The indie folksters dressed as Peter Pan characters last year but have stayed pretty mum about their costumes for the evening. So long as it’s not the Spice Girls a la Tame Impala last year, we’re good.

A show so awesome that it may already have sold out, night one of the Total Trash Halloween Bash already tells you who’s wearing what just so y’all don’t come in the same outfit. SFAppeal favorite Hunx will donning his most fabulous blood-sucking regalia as “Gayracula” while who knows the sanguine condition of his backing band, the Punx. We already know what one member of the Punx is dressing up as: Shannon and her backing band the Clams are set to do a full Metallica set as Metallica themselves.

Tomorrow’s fabulous final night of the Total Trash Halloween Bash concludes with masked legends the Phantom Surfers. If you’re not inspired to wear board shorts or a wet suit for Halloween next year, then at least hit the waves sometime in between now and then now that you’ve got the perfect soundtrack for surfing.