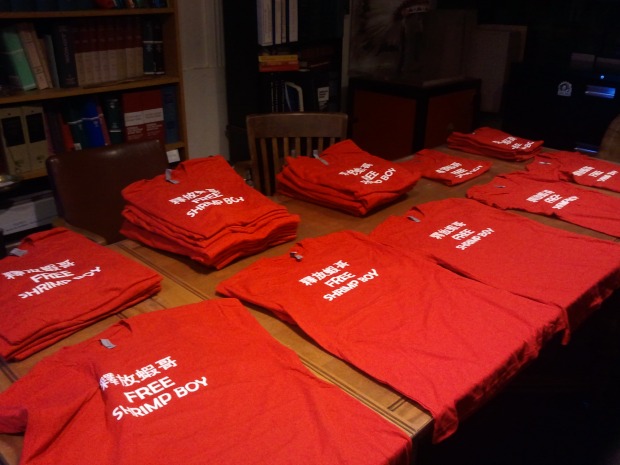 Amidst the FBI questioning the city’s Board of Supervisors over ties to State Senator Leland Yee, and a widening investigation into the alleged criminal conspiracy that likely includes RICO charges, a small group of Raymond Chow (aka “Shrimp Boy”) loyalists gathered at his defense attorneys’ office to raise the cash needed to mount a defense.

It was a calm evening at Pier Five’s North Beach headquarters. The crowd of a couple dozen gathered over donated drinks and food, and participated in a silent auction which included fine alcohol, apparel, jewelry, and a lithograph apparently created by Pablo Picasso, among other items. “Free Shrimp Boy” t-shirts were also on sale.

Several members of Shrimp Boy’s family were in attendance, as well as the admitted gangster’s girlfriend, as well as a motley collection of associates. Few would discuss the case with the Appeal — and those familiar with the case are more or less waiting to obtain the evidence the government has collected during its investigation.

There were no speeches at the law offices this time — a sharp contrast from the roaring oratory delivered to national TV crews and journalists at the first press conference. Instead, Chow’s supporters talked quietly over the course of the evening, expressing concern for his current incarceration.

Chow, 54, whose Ghee Kung Tong organization was infiltrated by the FBI for five years, has been charged with money laundering and conspiracy to traffic stolen goods in a far-reaching federal indictment that includes 28 other defendants, an indictment that also includes state Sen. Leland Yee.

Notably absent from the Wednesday evening gathering was world famous civil rights attorney J. Tony Serra. In the past Serra has said regarding Chow that “We don’t represent a gangster, we represent an exemplary human being,” and called the government’s case “self-serving” and full of “false premises.”

In part, the fundraiser was small because people are fearful of stepping forward, a member of Chow’s defense team said. “In the Chinese community there is an overwhelming level of fear to discuss the Tong organizations [named in the federal indictment], and support their legitimate activities,” Shrimp Boy attorney Greg M. Bentley told the Appeal.

Many also are afraid of donating to the defense fund because they believe that the FBI is going to roll them into the investigation as well. “They [FBI] scared the Chinese community,” Bentley said. (The FBI declined to provide comment for this report.)

Because Chow elected to retain private counsel, the costs of mounting a defense — one that Serra has said he intends to take to trial, pro bono — will have to be born by the defendant and his legal team.

One of the first expenses is purchasing evidence held by a federal contractor — Colour Drop on Van Ness — which is ultimately responsible for the materials’ duplication and distribution to the various interested parties.

Defendants who are unable to retain private counsel do not have to pay to obtain evidence.

These days, for large multi-defendant criminal trials, evidence is often distributed on via CD or via hard drive—especially if there are thousands and thousands of pages of documents. “The entire system of discovery is often overlooked,” Colour Drop employee Bryan Reuter to the Appeal over the phone.

And that system isn’t free. Colour drop charges $10 to $15 per disc of evidence, and $0.16 to $0.20 per page — both depending on the amount of labor required to produce the materials (such as aligning receipts on a flatbed scanner). The majority of fees, though, depend on the form the US Attorney’s office supplies the evidence in. Drives are much cheaper to duplicate. In any case, the expense of document duplication for a five-year investigation will not be an insignificant one. 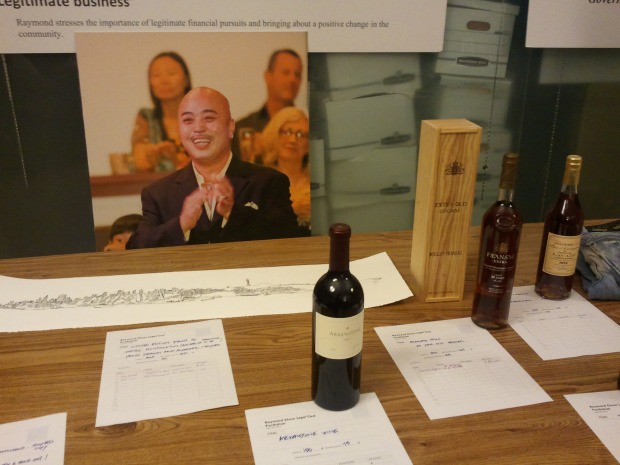 While this gathering was small, and the donated items totaled a relatively small amount of cash, throughout the course of the evening this reporter heard discussion of future fundraising efforts to defray the costs of the case.

“This is the first of many,” Chow’s attorney Bentley confirmed to the Appeal.