Chow, 54, whose Ghee Kung Tong organization was infiltrated by the FBI for five years, has been charged with money laundering and conspiracy to traffic stolen goods in a far-reaching federal indictment that includes 28 other defendants, an indictment that also includes state Sen. Leland Yee.

Standing next to a blown-up photograph of Chow smiling and clapping in his North Beach office, world famous defense attorney J. Tony Serra, in his trademark oratory style, argued that the government’s strategy in the case was thus far “self-serving” and full of “false premises.” 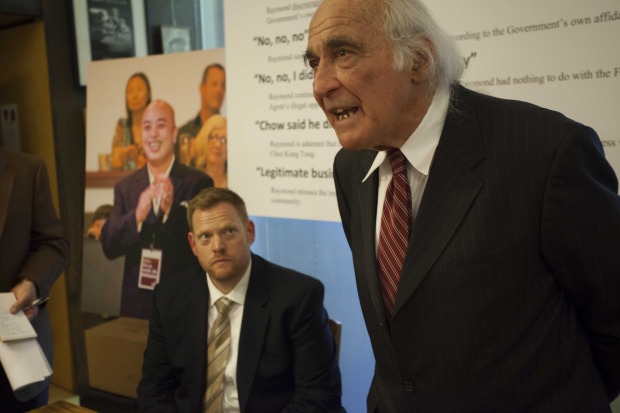 “We don’t represent a gangster, we represent an exemplary human being,” Serra said. The veteran attorney went on to explain that the federal government’s strategy thus-far has been “self-serving” and has painted a grossly inaccurate picture of Chow’s life in order to advance their case, and taint the potential pool of jurors.

Serra also accused the federal undercover agents of enticing Chow, who isn’t affluent enough to retain private counsel — Serra and company are defending him pro bono — with dinners at lavish restaurants and $250 glasses of scotch.

“If he was a real gangster he would have real money,” Serra said. “He does not.”

Furthermore, the undercover agents, Serra said, are experienced liars, in the business of pretending they are someone who they’re not for long periods of time, in this case five years.

“It takes a certain kind of human being to be a five-year mole,” Serra said. Lying and deception “has to be their forte.”

The FBI only charged Chow after five years of surveillance without witnessing any crimes, charging him once they had evidence to implicate Yee, “the celebrity defendant they wanted all the time.”

Serra said the case would eventually go to trial and that Chow would testify at his own trial. 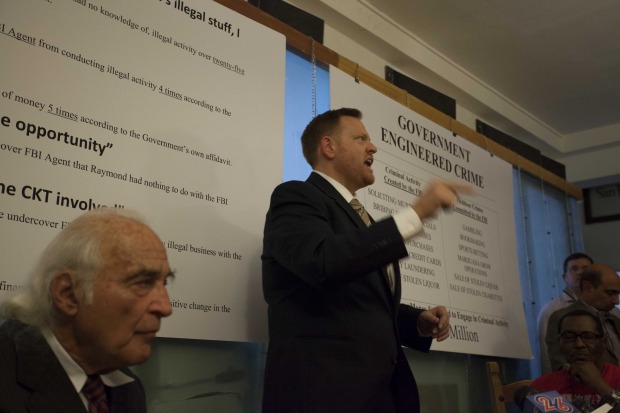 Curtis L. Briggs, another of Chow’s attorneys, argued that the government’s evidence contained in the affidavit contained startling contradictions. Not only did Chow discourage the undercover agents from participating in illegal activities, but the defendant also made clear “25 times” that he didn’t want to have “anything to do with” illegal activity being proposed by the agent. “That’s what an innocent man says,” Briggs said.

The defense attorney also pointed out that for the past decade Chow has devoted an enormous amount of time and energy to helping the community, on a volunteer basis. Saying that Chow gave talks to children and youth, Briggs said that “Raymond’s mantra was “crime doesn’t pay.”

Briggs said the FBI was “simulating” and “fabricating” the charges against Chow, and did not implicate him in any of the firearms, drugs or violent charges that other defendants in the case are charged with. “It’s Hollywood,” Briggs said.

Eli Crawford, executive director of the Raw Talk for Life program, an outreach effort that focuses on violence prevention among at-risk youth in the Bay Area, also spoke for a few minutes in support of Chow. A one time leader of the notorious prison gang the Black Guerrilla Family, Crawford told members of the press that at one time he was “right along with Raymond” in prison, but that Chow, much like Crawford, has become a beacon of hope for those in the community in danger of descending into a life of crime.

“I will stand anywhere in the world with Raymond Chow.”

Crawford insisted that Chow focused on his work in the community, giving lectures to youth with Crawford, and that the government had “got it all wrong.” He also said that the affidavit had corrupted Chow’s language because he doesn’t speak “such good English.” 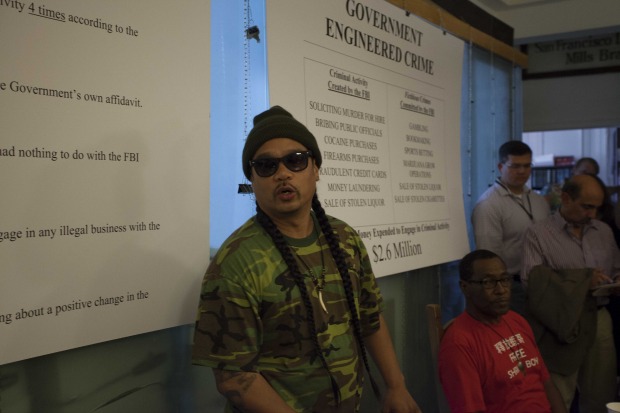 The final Chow supporter identified himself as Rudy Corpus, and says he also works in community outreach. Corpus explained how he and Chow have worked together in the past at youth outreach events. Corpus told the Appeal that the pair had been talking about working together for some time, and when a speaker dropped out of an event at the last minute, he gave Chow an opportunity to fill the spot.

The results were staggering, Corpus said, and the entire auditorium was dead-silent, riveted, almost in shock at what this “short guy” was telling them. “You could hear a mouse piss on cotton,” Corpus told the Appeal. Corpus went on to praise Chow’s efforts since, and said that he “hoped” that the charges weren’t true. “We’ll have to wait and see.” 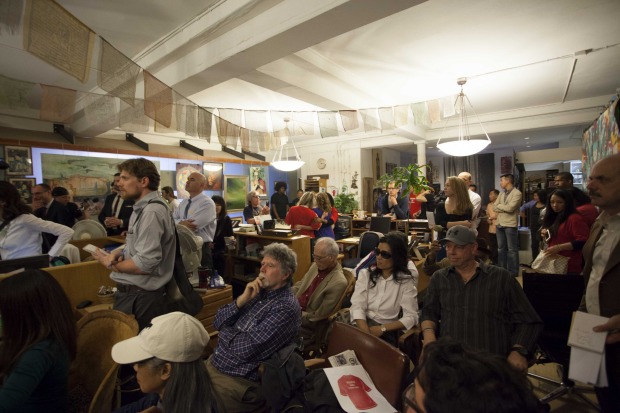 Federal investigators and prosecutors claim that after infiltrating Chow’s Ghee Kung Tong organization five years ago, undercover agents were approached for a variety of criminal enterprises including laundering money, trafficking in narcotics, firearms, stolen cigarettes and liquor and engaging in murder for hire schemes.

It was through the organization that agents were introduced to former San Francisco School Board President Keith Jackson, who allegedly assisted the agents in purchasing illegal firearms, and eventually Yee, who allegedly helped them purchase illegal weapons in exchange for campaign donations, according to court documents.

Despite the fact that Serra is still waiting for the full evidence in the case, he sees no connection between Chow and Yee, and that Yee has “a great entrapment case.”

Chow has a lengthy criminal history including a 1996 conviction in federal court for weapons trafficking charges. He has previously pleaded guilty to racketeering charges involving murder for hire, conspiracy to distribute heroin, arson and conspiracy to collect extensions of credit.

During the trial of Peter Chong in 2002, Chow testified that he and Chong ran a criminal enterprise in San Francisco’s Chinatown, collecting “protection” money from gambling dens. His sentence was shortened in exchange for his cooperation in the Chong case.

Serra is a San Francisco character and has spent decades building an unusual law office at Pier 5. In 2005 Serra was convicted of tax evasion. Over the years he has defended numerous controversial and unpopular clients. True Believer, a 1989 legal drama based on a Chinatown gangland murder, saw James Woods playing a character based on Serra. Serra is also an outspoken cannabis advocate. (Just moments after the press conference concluded, this reporter caught a pungent whiff of freshly burnt marijuana, in fact.)

Chow is next due in court Friday for a discovery hearing.

Scott Morris of Bay City News contributed to this report