Holiday Wurlitzer Extravaganza Saving Mr. Banks The Hobbit: The Desolation of Smaug by Laura Hooper Beck | December 13, 2013 11:24 am | in Culture | 0 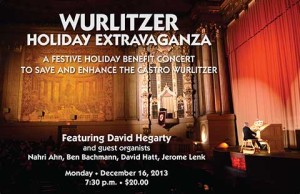 The Hobbit: The Desolation of Smaug – Everywhere
Same shit, different day. Watch Ian McClellan collect a paycheck for three hours. This is a short book — why they gotta make THREE movies about it? It’s excessive and no amount of magical New Zealand greenery panoramas is gonna convince me otherwise. Sorry, New Zealand.

Saving Mr. Banks – Century San Francisco Centre 9
Tom Hanks is Disney and Emma Thompson is P.L. Travers, the author of Mary Poppins and together they’re cantankerous old coots who are grumpy at each other whilst trying to make a film adaptation of the book. Of course, Disney wants to fuck everything up because that’s what he does, and P.L. Travers just wants to protect her beloved book and main character, but she’s painted as a batty, barren spinster who hates everyone and everything. It’s basically Grumpy Old Men with Hanks and Thompson and not to be on the nose, but Thompson is the only thing saving this movie.

I love animals and food!