Kindler, Gentler Wrap-Ads Coming to Muni — But To Only 15 Buses, Trains 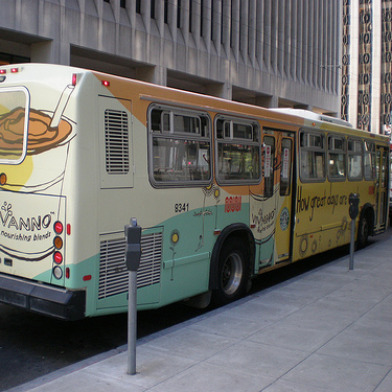 The San Francisco Municipal Railway’s moneymaking plan to cover buses and trains from wheel to wall in advertisements was approved on Tuesday — but just barely, and only after the plan was severely scaled back.

The agency had hoped to make as much as $500,000 annually with its “wrap-ads,” in which a vehicle is covered with a pitch from a single advertiser. The ads would not be handled in-house: the revenue generated would be via advertising agency Titan Outdoor, which already handles a fair bit of ads on Muni.

Muni has since 2009 been permitted to use wrap ads which do not cover windows; these new wrap ads are “more porous” that previous ones, leading the agency to ask for permission to cover vehicles’ windows, as well.

Muni’s $500,000 revenue estimate was based on being allowed to cover 5 percent of its buses and 10 percent of its light rail vehicles with ads, but under Tuesday’s scaled-back proposal, only 15 total vehicles will be covered in ads, according to agency spokesman Paul Rose.

That means the $500,000 figure may not be realistic, according to Sonali Bose, the agency’s Chief Financial Officer.

“We’ll have to work harder to reach that amount,” she told the Board. “We’re going to try… but it will be hard.”

The wrap plan received lukewarm support at the Board of Supervisors, winning approval with the slimmest majority of votes, 6-5. Supervisors Scott Wiener, David Campos, John Avalos, Ross Mirkarimi and Eric Mar all recorded no votes.

Muni scaled the project back from potentially dozens of vehicles to 15 in part because of public outcry. That didn’t please Supervisor Sean Elsbernd, who voted in favor of the final plan.

“As a rider, what am I willing to deal with?” he asked. “It’s about quality of the ride… if it’s a choice of walking 10 extra blocks to my stop, or paying three bucks for that one way ride instead of two, I’ll take the obstructed view.”

Passengers will see the ads in place as early as September, when the contract is to take effect. Muni will revisit the Board some months later to ask for permission to wrap more vehicles in ads. Just in time for Christmas!

Photo of the older-style, windowless style of wrapped bus: SFMTA