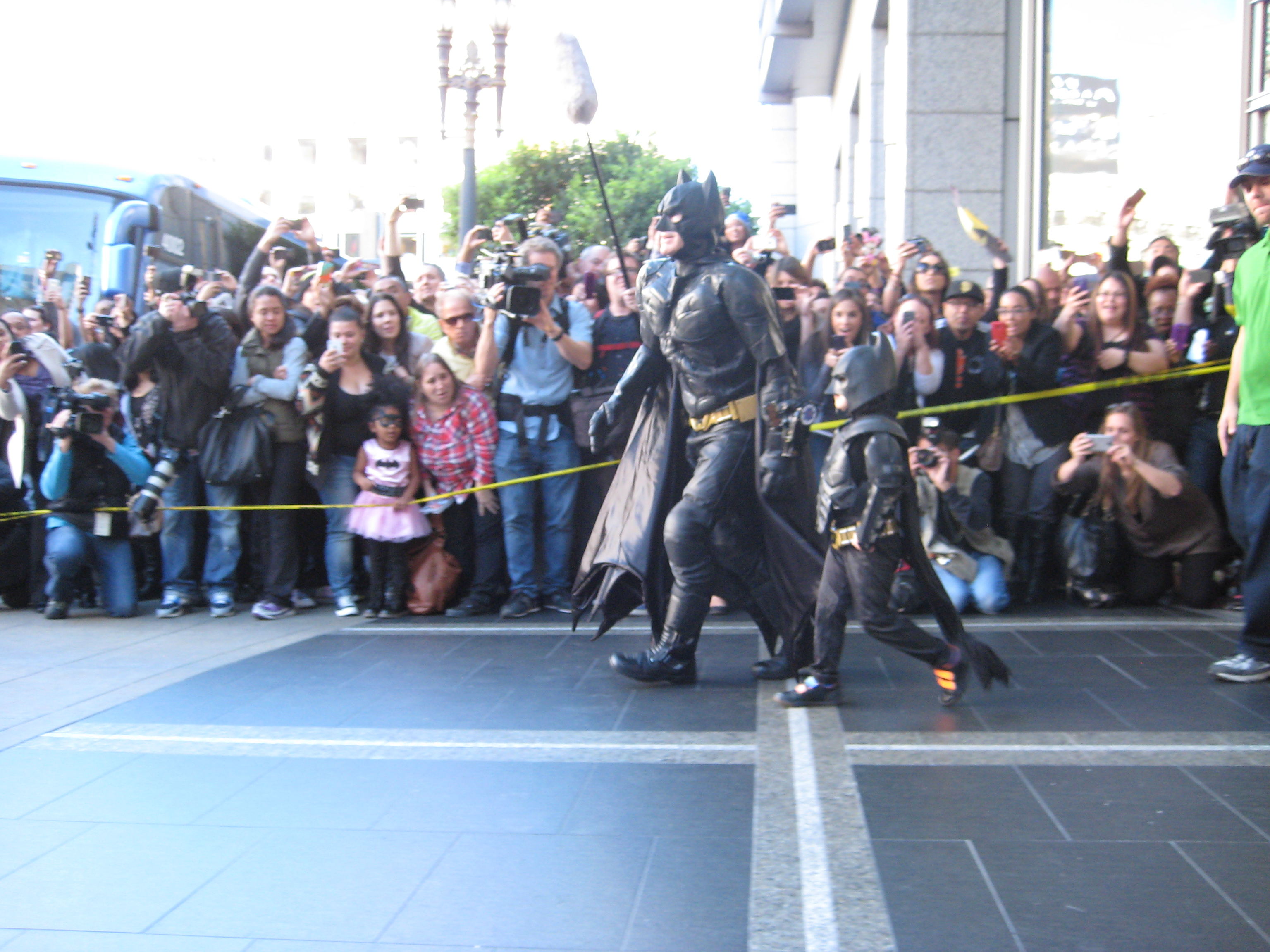 Batkid and Batman head off to rescue Lou Seal from the Penguin
at AT&T Park. PHOTO BY MELISSA MCROBBIE

The transformation of San Francisco into Gotham City in an effort to grant a young cancer patient’s wish to become his hero, Batman, began modestly enough, with a request to the city for two motorcycle officers and two parking spaces, according to Patricia Wilson, CEO of the Make-a-Wish Greater Bay Area.

The story of how that plan evolved into an event in November of 2013 that drew an estimated 20,000 volunteers and bystanders eager to cheer on the 5-year-old “Batkid” as he defeated villains across the city is the subject of the crowd-funded documentary “Batkid Begins,” set to hit theaters this summer.

Directed by Dana Nachman, the full-length feature begins with Miles Scott’s diagnosis with leukemia when he was 18-months old and the years of intensive treatment that followed, a story told through animated comic book-style panels and interviews with his parents.

The Tulelake, California family contacted the Make-a-Wish Foundation in February 2013 and Miles, a superhero fan with a fondness for dressing up in costumes during his cancer treatments, quickly made it clear that he wanted to not just meet Batman, but become him.

Wilson said in the documentary that the nonprofit, which grants wishes to children facing life-threatening illnesses, has granted superhero-themed wishes before and once organized more than 200 volunteers so that a little girl could sing in front of an audience.

But with the help of Eric Johnston and Mike Jutan, local computer game programmers who played Batman and the Penguin, respectively, the “Batkid” project rapidly grew into something more ambitious. The final event included multiple villains and actors, stunts including the rescues of a damsel in distress and San Francisco Giants mascot Lou Seal, costumes designed by San Francisco Opera crew members and even a wrist projector that played messages for Batman from Police Chief Greg Suhr.

“Everyone said yes on this project. They not only said yes, they said how else can I help?” Wilson said.

In a way, the film is a story about the power of social media. Initially expected to involve around 200 volunteers, the event began to snowball after Jutan promoted it on Twitter and Facebook. Organizers were quickly inundated with media requests and rsvps from thousands of volunteers and the online response ultimately included comments from heavyweights including President Barack Obama.

City officials scrambled to accommodate the crowds and provide enough police presence to keep the streets clear during the event, while the family fretted about their shy son’s reaction to all the attention.

“It’s like we’re organizing a stage production that’s huge, and the main character doesn’t know he’s in it and hasn’t rehearsed and he’s 5, so what could go wrong?” Johnston says at one point in the film.

However the big-eyed Miles, who had by then completed treatment and was in remission, turned out to be a natural actor when the day arrived, assuming a heroic pose and striding purposefully across the city in his costume, Batman at his side.

It also helped increase offers of donations and volunteers as well as referrals for the Make-a-Wish Foundation, and even crashed the organization’s servers while it was happening. While the event cost the city more than $100,000, those costs were ultimately covered by philanthropists John and Marcia Goldman, a move that helped to quell any potential criticism.

“That discussion is off the table, there’s just nothing negative you can say now,” Wilson observes.

Batkid Begins will screen in limited release starting June 26 and nationwide in July.