In 2001, Michael Finkel, a journalist with the New York Times, was fired for partially fabricating a story about brutal working conditions and child slaves in the Ivory Coast coco trade. The same week, an American named Christian Longo was arrested in Mexico, where he had fled after his wife and three children had been found murdered in Oregon. When he was arrested, he had been using the alias, Michael Finkel, passing himself off as the journalist.

Seeing the potential for an interesting–to say the least–story, Finkel contacted Longo, and they began a lengthy correspondence that eventually resulted in the book True Story: Murder, Memoir, and Mea Culpa.

The movie version, perhaps better titled Kind of a True Story, stars Jonah Hill as Finkel, and James Franco as Longo. Right from the casting you can tell the filmmakers will be taking some liberties with how things played out, since there is no resemblance between the actors and their real life counterparts aside from the fact that they’re all men. (Also, imagine not looking anything like Jonah Hill and then finding out he’s playing you in a movie. Ouch!)

Such casting lead me to think the actors would be bringing something a little edgier to the film, but Hill and Franco play it very, very, straight, sometimes to the point of inertness, which can be a bit of a bore to sit through since a vast majority of the film is the two men talking to each other in a stark prison visitor’s cell.

Hill’s character is given a girlfriend, Jill, played by Felicity Jones, for reasons that are never completely clear, as she spends most of the movie just hovering around, silent, with a distressed look on her face. The best that can be said about her is at least she doesn’t fall into that most tired of cliches, the girlfriend or wife who is constantly yelling at her partner for being too obsessed with his work. (Instead, she takes it out on the object of his obsession.)

Still, despite its flaws, the movie manages to be engrossing, because it’s simply a hell of story. True crime is a hugely popular form of entertainment for a reason. Some of the liberties the film takes with the story are understandable–after all, watching a guy think and write does not make for terrific drama. But I still find it funny that this version of the story is the kind of thing that would have gotten Finkel fired all over again had he turned it in as fact. 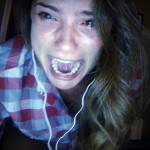 Maybe when this movie is released for the home market, I’ll give it a try, because it could be interesting to watch a film that takes place on someone’s computer screen on an actual computer screen. But because I am over 40, I have no desire to see such a thing play out in a theater. Especially when it’s a horror movie about online bullying and revenge. Have fun at the movies you crazy kids! 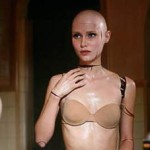 Sexy female robot! Oscar Isaac! There’s something in this movie for everyone! Isaac stars as a tech billionaire who’s experimenting with artificial intelligence, in the form of a comely ladybot named Ava (Alicia Vikander). He decides to add a human to the mix, in the form of a programmer (Domhnall Gleeson) who wins a contest to spend a week at the billionaire’s compound. Oh, the fun times everyone will have! Give or take a violent incident or two.

They made a sequel. God help us all.

When I was a kid, I loved going to the San Francisco Zoo to watch the monkeys scrambling around monkey island. Later in life, I realized that monkey island was really the worst; a terrible pile of concrete surrounded by a moat, where miserable monkeys flung their poop at the crowds. Still, my love of monkeys remained, so you can be sure as monkey shit that I’ll be watching this Disneynature doc about a family of toque macaques. Especially since Tina Fey narrates it.