If you haven’t already been bombarded with trailers and ads for this Will Ferrell and Kevin Hart comedy, well, I envy you. So here’s the plot synop, just in case: Ferrell is a wrongfully accused white collar criminal heading to San Quentin. He hires the only black guy he knows (Kevin Hart) to prep him for thug life, because he assumes this black guy must have served time. Of course, this black guy hasn’t been to prison, and hence: COMEDY!

Also, one of them is very tall, and the other one is very small.

I’m sure it has its moments, but I find the funniest thing of all is it was directed by Etan Cohen, a man whose Wikipedia entry says, right up top, “Not to be confused with Ethan Coen.”

Animated feature from DreamWorks features the voice of  “The Big Bang Theory”‘s Jim Parsons as an alien on the run from his fellow Boovs, who teams up with a young girl (voiced by Rihanna) who’s searching for her mother (voice of Jennifer Lopez). Steve Martin supplies the voice of the Boovian leader. 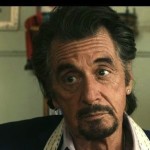 Al Pacino stars as an aging rock star who gets a letter from John Lennon, 40 years after it was sent. This propels him on a journey of self discovery. Also stars Annette Benning, Bobby Cannavale, and Jennifer Garner. Based on a true story. Kinda.

Why is a movie starring an Oscar winner and an Oscar nominee, who have both starred together before to critical acclaim, and are both big box office draws, getting dumped into theaters in the dead zone of March? Well, because it’s probably terrible. Set in depression-era North Carolina, it’s about greed, murder, and motherhood. I’ll probably watch it just for the costumes and hair, because sometimes, that’s enough.