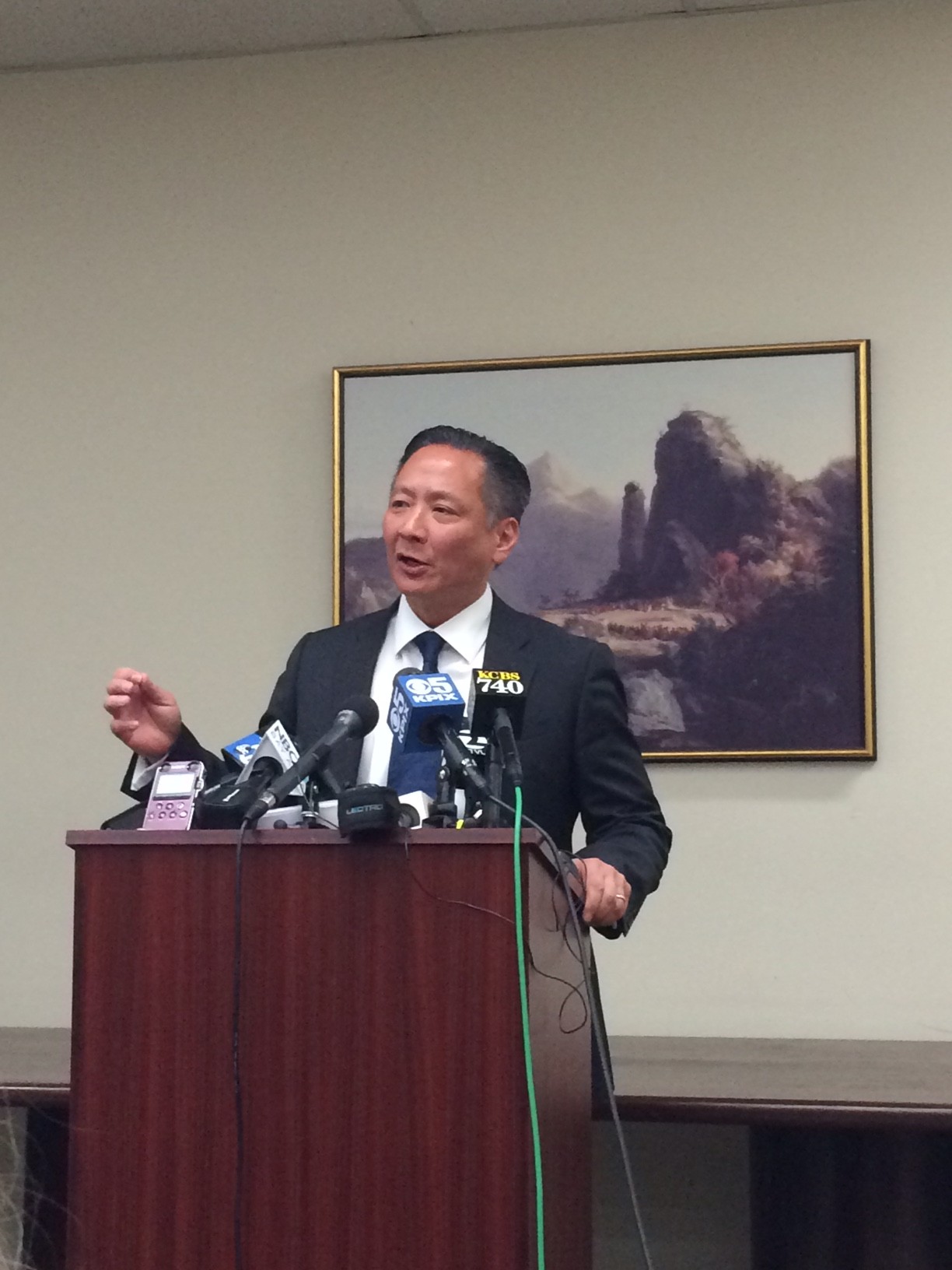 Adachi said that his office was alerted to the allegedly deputy-orchestrated fights through the father of an inmate via email on March 12 and that when he learned another fight was allegedly being scheduled he reached out to the San Francisco Sheriff’s Office this morning to ensure the safety of the inmates.

Adachi interviewed the man’s son, Ricardo Palikiko Garcia, who was housed in San Francisco County Jail No. 4, on the seventh floor of the Hall of Justice and assigned to kitchen duty.

Garcia said that he had been forced to fight twice and that the deputies were planning another fight.

In a letter addressed to San Francisco Sheriff Ross Mirkarimi today, Adachi requested the removal of those named deputies from any position where they have contact with inmates and provided Mirkarimi with a copy of the pro bono investigation launched by private investigator Barry Simon.

Mark Nicco, assistant legal counsel to the San Francisco Sheriff’s Department, said that this morning that all four deputies were reassigned to positions without inmate contact, but as of this afternoon, they have all been placed on paid administrative leave.

Mirkarimi said the inmates have been moved to the San Francisco County Jail in San Bruno, as of this morning.

According to Nicco, the two bailiffs, Deputy Francisco Aquino and Deputy Crystal Collins, who allegedly looked the other way when the fights were going on, have not been reassigned and that as of this afternoon neither had been placed on an administrative leave.

Mirkarimi said today that he found out about the allegations from Adachi’s office this morning and that he had not previously heard of such activities occurring within the jail.

Mirkarimi said his office will not tolerate such behavior from deputies and that he invites the federal government and the U.S. Department of Justice to assist in the investigation.

After receiving the initial email from Garcia’s father, Garcia’s attorney spoke with him and additional inmates who called the public defender’s office to report the alleged inappropriate behavior.

Richardson reported that Neu had previously tried to get him to fight another inmate, but Richardson refused.

Adachi contacted Simon to launch an investigation into these reports of violence and to interview the clients involved.

In the letter addressed to Mirkarimi today, Adachi writes that he demands an independent agency conduct an investigation into the matter, stating that he does not think the sheriff’s department’s investigators can fairly conduct such an investigation.

“Moreover, in 2006 and 2007, no action was taken against Deputy Neu, who was accused of sexually assaulting a male and female inmate, despite an internal investigation into the matter,” Adachi writes.

Neu was accused in a 2006 civil rights lawsuit of sexually tormenting several inmates, yet remained employed at the jail.

Adachi said that case was dismissed and settlement of $639,000 was reached.

On Wednesday, Adachi interviewed the two inmates who were made to fight and determined that deputies were allegedly planning yet another fight.

He wrote Mirkarimi specifically requesting that the inmates not be removed from their currently assigned housing and status as trustees, with privileges, as “this would in essence punish them for coming forward and reporting what happened to them.”

Despite Adachi’s request, Mirkarimi said today he had the inmates moved to a San Francisco County Jail in San Bruno.

In an interview Adachi recorded with Garcia on Wednesday, Garcia said he was scared to fight, but was threatened by deputies, who told him that if he didn’t fight, he would be placed in handcuffs, beaten up and that a Taser would be used on him.

Garcia, who is in his 20s, weighs about 150 pounds, stands 5 feet 9 inches tall and is of Hawaiian and Phillipino descent, said he was injured in the fights and made to go up against an inmate who weighed at least twice what he does.

He said the deputies told him that if either inmate ended up going to get medical attention, they were instructed to say that they fell off a bunk.

Additionally, the deputies instructed the inmates not to hit each other in the face, because then people would see that they had been fighting.

During the first fight, Harris and Garcia were wrestling and punching each other in a hallway, which Garcia described as having a blind spot, until Garcia got Harris into a headlock and he tapped out.

Following the first fight, Neu allegedly told Stanley that he would be coming in on Saturday to train him for the next round.

Garcia said Neu allegedly announced to everyone there that there would be a round two and that he doesn’t like to lose money, implying that he had bet money on Stanley and lost that money to Jones.

Jones allegedly told inmate Garcia he was counting on him and wished him good luck prior to the second fight.

Garcia, trying to postpone the fight, said he didn’t want to fight because Neu hadn’t paid up. Garcia said Neu had promised a burger during the first fight but hadn’t given it to him.

He said he tried to avoid Neu because he really didn’t want to fight.

“I was scared of doing it again,” Garcia said during his recorded interview with Adachi.

Garcia said Jones and Neu both told him he had to fight and Neu threatened to send him to another jail.

So Garcia went back to the fighting area where Staehely and Jones were waiting. Garcia said Chiba also knew of the fights.

Garcia fought Stanley and the two bailiffs, Aquino and Collins, started running toward the fight as if to intervene, but Neu and Jones signaled for them to stop and go back.

Garcia said he believes the bailiffs saw the fight but didn’t do anything about it.

The inmates were forced to keep fighting and they got each other in headlocks, at which point the deputies said they could stop.

Garcia said as a result of the fights he has bruises on his back, elbow and believes he may have fractured a rib because he still has trouble breathing and can’t sleep on that side of his body.

Garcia told Adachi that Neu and Jones, who both are Caucasian, were trying to stir up problems for him with the African Americans with whom he shared a pod.

“I feel scared for my life,” Garcia said, explaining that he just wants to do his time and get out of there.

Garcia is in jail on charges of drugs and weapons possession, according to the public defender’s office.

Garcia said he wakes up in fear that “the people that’s supposed to protect me is, is out to get me.”

He said he has to watch his back as if he were on the street, and that it is not other inmates, but the deputies, whom he fears.

Garcia said he felt he was being bullied as a result of his race, since he was the only inmate who was not African-American in his pod, and that he feared for his life.

According to Garcia, the deputies also make him gamble away the food he earns when he works extra in the kitchen and take his food or commissary items.

Initially Garcia told his attorney that he feared retribution and did not wish to raise the matter.

Harris, an African American man who is also in his 20s and stands about 6 feet tall and weighs over 300 pounds, was interviewed by Adachi on Wednesday and confirmed that he was forced to fight Garcia on two separate occasions.

Adachi said Harris is in jail on drug-related charges.

According to the recording of Harris’ interview with Adachi, he said he did not want to fight Garcia, but that the deputies threatened to cuff him and beat him. He said Neu also threatened to put him in a holding tank.

While the men fought, the deputies would cheer them on.

He told Adachi that Neu made him do 200 push-ups in less than an hour on Wednesday.

Adachi said that Harris is heavy and not in good health.

Harris said he felt embarrassed because he can’t complete the push-ups in front of other inmates, but said he liked working in the kitchen and didn’t want to get sent to “the hole” or the “main line” where more dangerous inmates lived or sent to the jail in San Bruno.

He said that he didn’t want Neu to put him in the interview room and “f*** him up.”

Harris said twice Neu has tried to fight against him. During both incidents, Neu allegedly took off his belt and his shirt and tried to get Harris to fight him, but Harris refused.

Harris also said that when Neu made him do push-ups he alluded to sodomizing him.

According to the report prepared by Simon, and distributed to San Francisco Police Chief Greg Suhr, San Francisco District Attorney George Gascon and the media, “Neu appears in the jail even when he is not scheduled to work.”

Harris told the private investigator that two or three months ago he saw Neu go into a laundry room with a female African-American commissary worker and emerge after more than an hour, and that the woman no longer works in that jail. He alleged that Neu is also known to have had sex with transgender inmates and civilian female jail workers.

Lewis, who is a laundry worker at the jail, said he also saw Neu go into the laundry room with the woman that day and had heard about the previous lawsuit filed against Neu in 2006 for sexually assaulting a woman.

Simon’s investigation also revealed that other inmates, as well as other deputies, might have been the target of Neu’s alleged bullying and violence.

Christopher said a female inmate had won a financial settlement after she was reportedly forced to perform a sex act with Neu.

According to Harris, Neu showed him two tattoos he had, both with the writing “850 Mob” that was located on his right arm and lower leg.

Mirkarimi said he had not heard of this term before, but presumed that the 850 referred to the address of the Hall of Justice, which is 850 Bryant St.

District Attorney Gascon said in a statement released this afternoon, “The conduct alleged against these Sheriff’s Department deputies is deplorable. Common sense indicates that such conduct does not occur without the knowledge of numerous people.”

Gascon said the allegations require an independent and thorough investigation into the San Francisco Sheriff’s Department and encouraged anyone with information to contact the San Francisco District Attorney’s Office.