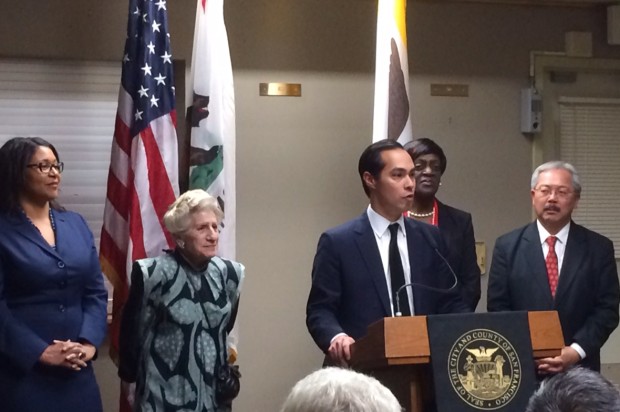 At a press conference in a public housing unit in the Tenderloin neighborhood this afternoon, Secretary Castro said that this shift to private management of public housing would allow major improvements to public housing to be made leveraging private capital.

He said this announcement comes after years of government failure to address the needs of public housing units nationwide.

Tight federal budgets and limited state and city funding has left many public housing units in unsafe conditions and has prevented creation of new units, according to Castro.

Through the U.S. Housing and Urban Development’s (HUD) Rental Assistance Demonstration (RAD) program, housing units in San Francisco, and across the country, are being transferred from the public housing programs to a Section 8 program.

Private developers, drawn to the program by tax breaks and subsidies, are given incentives to invest in affordable rental housing under the RAD program.

According to the National Housing Institute, a non-profit research organization, the RAD program was created in 2012 in order to give public housing authorities a tool to preserve and improve the country’s more than 1.1 million public housing properties in need of repairs, and address a backlog of roughly $26 billion in deferred maintenance nationwide.

According to the Mayor’s Office of Housing this public-private partnership will allow San Francisco to rehabilitate 4,584 public housing units for 5,400 low-income San Franciscans.

Other public housing authorities across the country are also transferring management to non-governmental agencies under the RAD program.

According to an independent evaluation of the RAD program prepared for HUD by the private research and management consulting firm, Econometrica, Inc., as of Sept. 15, 2014, public housing authorities nationwide have requested RAD conversion authority for 180,737 public housing units.

Transferring over 180,000 units to private management is expected to generate over $6 billion in new investment countrywide, according to HUD.

The mayor and San Francisco Board of Supervisors President London Breed, who both grew up in public housing, championed the partnership with HUD at the news conference this afternoon.

Breed said the city is providing over $50 million toward the rehabilitation efforts, in addition to the city funds dedicated to HOPE SF, an initiative that seeks to revitalize Hunters View, Sunnydale, Potrero and Alice Griffith public housing sites through more holistic, mixed-income communities consisting of retail establishments, parks, playground and community centers, intertwined with low-income housing.

Lee said today that many people in San Francisco’s public housing units are suffering and that many just want working elevators, which is crucial for disabled and senior citizens living in multi-story units. Others, Lee said, just want heat in the winter, working fire alarms, hot running water and cockroach-free homes.

Lee said he believes the transformation to Section 8 housing will be a sustainable solution for low-income residents.

An emotional Breed shared her own experiences today of growing up in the city’s public housing units. She described weeks where her family would have to use a neighbors’ bathroom because requests for plumbing services went unanswered by the housing authority.

San Francisco resident Beverly Saba, 75, who has been living in public housing in the Tenderloin for more than a decade, also spoke today about her experience as the president of the Citywide Council Senior/Disabled.

She said that while she is excited to see much-needed improvements made at her building and others across the city under the new partnership, she is concerned that as all public housing is transferred to private entities, established tenant councils may be threatened.

Saba said she wants, in writing, to know that RAD will continue to support jurisdiction-wide councils that advocate for tenants’ rights.

Saba said having an advocacy group for disabled and senior public housing tenants that is comprised solely of tenants is crucial.

She said the councils are needed to advocate on behalf of tenants, otherwise she worries individual tenants will be unable to take on management single-handedly.

She said wheelchair-bound residents who rely on elevators are often stranded because elevators in public housing units break down and that tenant councils and coalitions are there to fight for their most vulnerable tenants.

“They have to be able to have a life, leave their apartment, not get trapped in an elevator,” Saba said.

She worries that it could become more difficult for tenants to hold landlords accountable under the new program if private management does not recognize her council as well as a similar council that represents families in public housing.

Critics of the RAD conversions are also concerned over whether affordable housing will be ensured for generations to come, as most contracts with private managers will last for 15 to 20 years, with no guarantee for tenant housing after that contract expires.

While San Francisco residents are welcoming the mayor’s promise of physically improved housing units, activists and union workers in cities, such as Baltimore, Maryland, have been more vocal about their concerns over public housing loss, resident displacement, tenants rights and loss of middle-class jobs at the public housing sites.