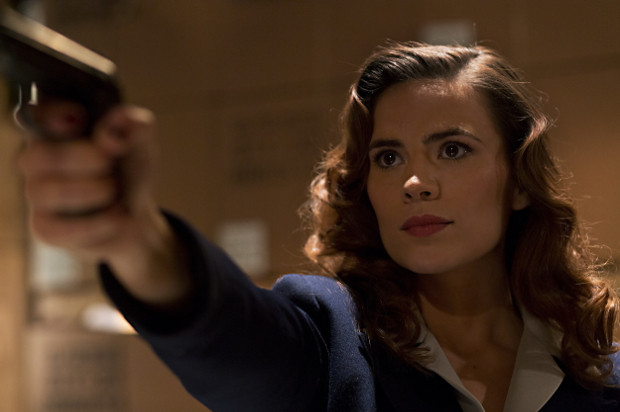 Good Lord, this week in TV. Too early to cue up The Mountain Goats’ “This Year?” as a rallying cry? Hope your DVRs are ready.

Monday, January 5
The Bachelor (8pm, ABC, season premiere)
Bachelorette castoff Chris Soules, described as a “stylish farmer from Iowa,” comes back to get his. Because if at first you don’t succeed, get a spin-off.

Tuesday, January 6
Marvel’s Agent Carter (8pm, ABC, series premiere)
Agents of SHIELD won’t be back until March, but MCU fans still come up on top as Hayley Atwell reprises her role as Peggy Carter for the eight-part mini-series Agent Carter. Picking up after the events from the first Captain America, (let’s forget about the old-person make-up job from Winter Solider), Agent Carter works with Howard Stark to help clear his name after being framed for selling weapons of mass destruction. This is also after coming back to a post-war that marginalizes her because she’s a woman (note to self: it took ABC long enough to get rid of those ‘best man for a job is a woman’ promos for Agent Carter, and I hope whoever came up with that was shot out of a cannon).

Empire (9pm, FOX, series premiere)
FOX is certainly putting a lot of weight behind this Terrence Howard fronted family drama about the dying patriarch of a record label looking to bequeath everything to one of his sons, even as the sins of his past come back to haunt him. Metaphor for a dying industry?

Hindsight (10pm, VH1, series premiere)
Time-traveling back to the 90’s to figure out where our protagonist’s life went wrong and how to fix it. Also, jokes about the 90’s.

Donnie Loves Jenny (10:30pm, A&E, series premiere)
At this rate, A&E is basically part of the Wahlberg family. This one chronicles the relationship between former New Kids on the Block singer/actor Donnie Wahlberg and Singled Out co-host/she’s a woman and she’s funny/anti-vaccination advocate Jenny McCarthy. Guess what else is making a comeback? Measles!

Babylon (10pm, Sundance, series premiere)
Danny Boyle (from them movies!) co-creates this comedy-drama miniseries about an American PR executive who finds herself the director of communications for the London Metropolitan Police. Should be chock full of crunchy nuggets about the role of social media, instant communication and its role when government/ police are involved.

Friday, January 9
Glee (8pm, FOX, season premiere)
The final season of Glee will take place in the Friday Night Death Slot in order to fade the last four years from the collective memory (because the first season was pretty good, let’s be fair, but it is Ryan Murphy we are talking about).

Banshee (10pm, Cinemax, season premiere)
Alan Ball’s (creator of Six Feet Under and True Blood) pulpy story of a convict posing as a small town Sheriff that gets mixed up in criminal activities and Cinemax-styled sex scenes comes back for a third season.

Saturday, January 10
Mythbusters (9pm, Discovery Channel, season premiere)
After the departures of co-hosts Kari Byron, Tory Belleci, and Grant Imahara in August, the upcoming season of the long-running science show will be anchored by original hosts Adam Savage and Jamie Hyneman. And what better way to kick off a new season with a special testing things from The Simpsons?

Shameless (9pm, Showtime, season premiere)
This season, Shameless takes on gentrification in its Chicago setting. (Note to self: take notes).

Looking (10pm, HBO, season premiere)
At this point I would rather write about HBO’s Looking than Girls because this is the San Francisco Appeal, and Looking takes place in San Francisco. Not to mention it’s a sweet show. And Lena Dunham, is well, Lena Dunham.