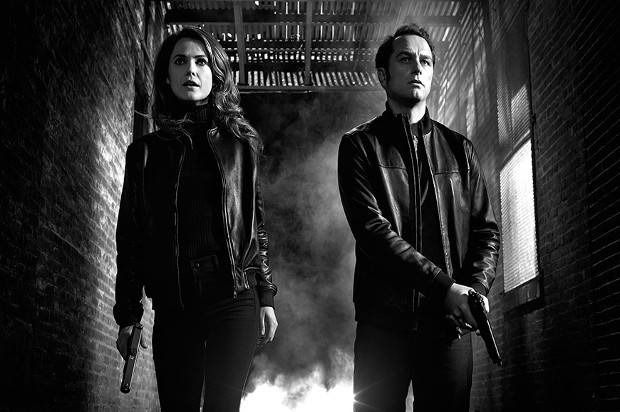 Monday, January 26
Mud, Sweat, and Gears (10pm, BBC America, series premiere)
Now that AMC owns a majority stake in BBC America, and recently canceled all of their own unscripted programming (rest in power, Small Town Security), I’m guessing that’s where BBC America gets dumped on (not to say that BBC America hasn’t already been putting out unscripted fare not dissimilar to this). To be fair, this show was ordered before the AMC takeover. Maybe AMC’s Game of Arms can come back to BBC America. At least Netflix isn’t losing a bunch of its BBC content at the end of the month, as we feared?

Tuesday, January 27
The Chase (8pm, Game Show Network, season premiere)
Good on the Game Show Network for having an honest-to-god game show that just isn’t Jerry Springer revealing awful secrets about people. The Chase pits contestants against The Beast, a hulking trivia nerd with a British accent and a superiority complex.

Wednesday, January 28
The Americans (10pm, FX, season premiere)
The Americans is television’s current pinnacle. The past two seasons have been hypnotic, soul searing, and an emotional daisy-cutter. Season three takes place in 1982, shortly after the death of Soviet leader Leonid Brezhnev. One more in-show year until Pat Benatar’s Love Is A Battlefield is released and TV critics can accurately describe the central relationship between Soviet spies-next-door Philip and Elizabeth Jennings. Frank Langella joins the cast as the Jennings’ new handler, as the conflict of recruiting their eldest daughter Paige into the family business of spying for the Soviets and ass kicking looms over their heads. Also, mentioned during the TCAs, The Millers was canceled pretty far into the production of season three of The Americans, but I’m hoping for some Margo Martindale action.

Fortitude (10pm, Pivot, series premiere)
Pivot TV, a niche cable channel that caters to those buzzword “millennials” and is the US home to the great Australian sitcom Please Like Me and reruns of Farscape dips its toe into scripted drama game with Fortitude, a collaboration between Pivot and UK’s Sky. It got plenty of buzz at the winter TCA tour, with the basic consensus that it’s Twin Peaks, but in the Arctic. Starring Stanley Tucci as a detective called up to the titular remote Arctic town to investigate a murder, with a cast that includes Christopher Eccleston, Michael Gambon, Sofie Gråbøl, and Jessica Raine. Note that the creator/writer of Fortitude is the same bloke who created the original UK Low Winter Sun, and not the shit parade AMC remake.

Anybody else sing Stan Bush’s The Touch but replace ‘touch’ with ‘Tucc’ because you’re really singing about Stanley Tucci? Me either.

Friday, January 30
Key and Peele Super Bowl Special (10pm, Comedy Central)
The only pre-Super Bowl hoopla I will acknowledge this week. Key and Peele may be known for their college football name sketches over the past couple of years, but for the past couple of weeks, they’ve been appearing on Youtube as NFL veterans Dante Pibb and Bertram Skilling and breaking down the past week’s AFC and NFC championship games. Now that the die is cast, let’s see what they do with the upcoming Super Bowl game.

Saturday, January 31
Red Band Society (9pm, FOX, returns from hiatus)
The Fault in our Stars-baiting, sick teenager drama Red Band Society was canceled a couple of weeks ago. The rest of the episodes will be shown on Saturday nights. I guess you could say it was terminal! Don’t feel bad for FOX, they hedged their 2014-2015 on a goddamn 50 million dollar reality show that took place in the boonies of California. At least Empire seems to be good so far (and was renewed for a second season).

Puppy Bowl (3pm, Animal Planet)
It’s only a matter of time that, much like the the original NFL and AFL, puppies and kittens will combine to compete on the same bowl game. Give the people what they want.

Super Bowl XLIX (6:30pm, NBC)
Straight out of the University of Phoenix Stadium in Glendale, Arizona, in what will probably be a dogfight (or total blowout, I’m not exactly sure), the Seattle Seahawks take on the New England Patriots for the 49th annual branded commercial experience and eye-rolling at smug social media acquaintances talking about not caring about sports (seriously, while it’s more than valid to not follow sports, your brave stance is about as edgy as a butter knife. Living your truth be fucked).

The Seahawks are in the position to be back-to-back Super Bowl champions, which hasn’t been done since the 2005 Patriots. Before the million dollar commercials are turned into gifs on Buzzfeed and think pieces thought about Richard Sherman (because think piece writers are tone deaf asshats), Katy Perry and Lenny Kravitz headline the halftime show and Idina Menzel (Frozen’s Queen Elsa to children, or if you’re John Travolta, Adele Nazeem) sings the national anthem, and John Legend performs “America the Beautiful.”

After the post-show breakdown, stay tuned for the traditional ‘network shoves their favorite show in your face’ with the winter season premiere of the James Spader in a Hat Hour, otherwise known as The Blacklist (10:15pm, NBC).