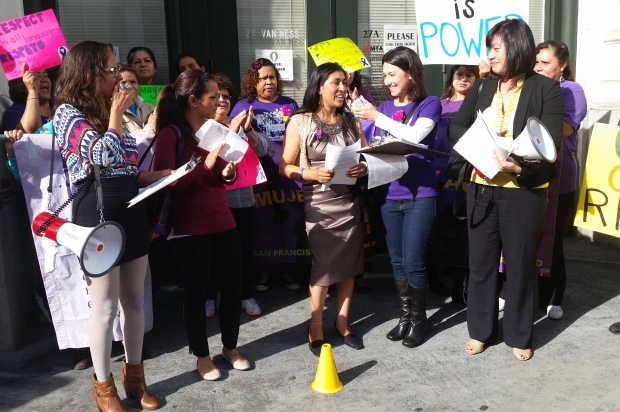 A San Francisco resident, with the help of civil rights advocacy groups, filed a citizen complaint today alleging the San Francisco Police Department failed to provide an interpreter when responding to a report of domestic violence.

The Asian Law Caucus, together with the Latina women’s organization Mujeres Unidas y Activas, filed a complaint on behalf of resident Dora Mejia with the city’s Office of Citizen Complaints and a California Tort Act administrative claim against police for failing to provide language access and wrongfully arresting a victim of domestic violence.

Mejia said she was exhausted when she came home from work one day in May. She got into a fight with her ex-partner, who refused to leave her apartment after they broke up and called the police on her.

Mejia doesn’t speak English and officers told her there were no Spanish-speaking officers available even though they provided an interpreter to her abuser, she said. They also didn’t offer her an opportunity to call the Police Department’s telephone interpretation line, she said.

Mejia said the officers arrested her and separated her from her children.

“I felt discriminated against,” Mejia said through an interpreter. “Sometimes, out of fear, it’s hard to speak out. It becomes even harder to speak about abuse … when the police refuse to offer us protection when we do find the courage to speak up.”

San Francisco police spokeswoman Sgt. Monica Mcdonald said the department is “committed to the continued efforts to ensure that all citizens have the ability to report and provide information in their native languages.”

Speaking at a news conference this morning, Asian Law Caucus senior attorney Angela Chan said Mejia’s case is not an isolated one.

“SFPD adopted one of the best language access policies in the country in 2007,” Chan said. “However, many groups here today know that we receive regular reports of community members being denied language access and domestic violence survivors being falsely arrested.”

One woman who attended the event said she was in a very similar situation eight years ago. San Francisco resident Silvia Lopez said she was afraid to leave her abuser because she has two daughters.

“I didn’t know what would happen to me or to them,” Lopez said.

When she called police about her abusive partner, they told her there was no one available who could speak Spanish, Lopez said.

“I was frustrated and afraid,” she said.

According to its website, the Police Department has officers who speak Spanish, Cantonese, Mandarin and Russian and have access to telephone interpreters who speak Tagalog, Vietnamese, Hindi, Korean, Japanese, German, French, Italian and other languages.

Mcdonald said the department does offer training in its language access program, including training specifically focused on responding to reports of domestic violence when the victim does not speak English.

“There’s a big difference between law and reality,” said Chinese for Affirmative Action policy director Grace Lee. “When they say it’s one bad apple or one anomaly, we know the reality is very different.”

In 2013, there were 451 officers who spoke a foreign language and 2,217 people who called police and either don’t speak English or only speak a limited amount of English, according to statistics provided by the Asian Law Caucus.

The vast majority used a telephone interpreter, but it’s unclear whether the remaining cases used an in-person officer who spoke the language or if they did not receive the interpreter services, Chan said.

The department does not keep statistics when officers provide the interpretation services themselves, she said.

The problem, said Juana Flores, co-director of Mujeres Unidas y Activas, is what happens when the officers aren’t trained in using the program or apply the program unequally.

Chan said the advocates are asking the San Francisco Police Department to do an independent audit or assess why there continues to be compliance issues with their language access policy.

They also want the department to closely monitor the program to ensure officers are providing interpreter services and collect and issue regular statistical reports to the public.

“We urge the SFPD to follow their language access protocol at all times and that there is accountability to the community if these situations happen,” Flores said. “We would like to work together to strengthen the training of police officers and to make lack of language access a thing of the past.”