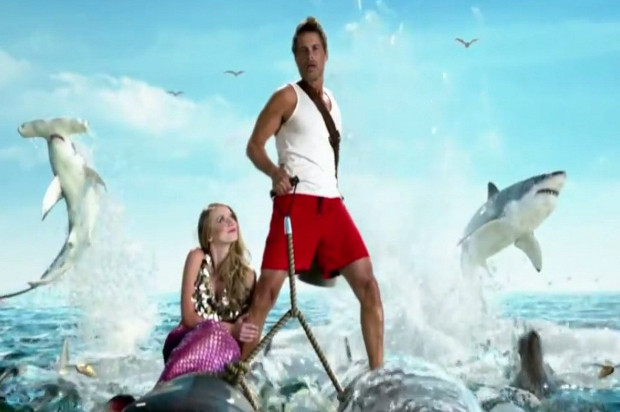 Shark Week is here! Discovery Channel’s Shark Week is here! I am only a little embarrassed I had to Google when Shark Week was happening (like Googling to find out how long Ramadan lasts for and/or when Hanukkah starts). Which, come to think of it, Shark Week is like the high holy days of the easily amused. But in the meantime, sweet Shark Week promo with Rob Lowe, huh?

You can find the offerings of this year’s Shark Week programming here (everything on Discovery Channel, natch) with some highlights including:

Judging from the titles, it seems that Discovery is doubling down on blurring the line between education, entertainment, and the production companies who produce SyFy’s Saturday night movies (Thanks, Sharknado/Obama). But what if you don’t celebrate Shark Week? That’s okay! Here’s what else is on for the week ( spoiler alert: the debris from the summer season begins to come home to roost).

Monday, August 11
Candid Camera (8pm, TV Land, series premiere)
Mayim Bialik hosts the rebooted genesis of the televised prank show. I had this whole thing about candid cameras in the Gaza Strip and how the BBC doesn’t allow them (unbiased journalism amirite/Mayim Bialik sending bulletproof vests to IDF soldiers), but honestly, the joke never got beyond the concept stage.

The Approval Matrix (11pm, Sundance, series premiere)
Based on New York Magazine’s pop culture round-up guide and hosted by Neal Brennan (Chappelle’s Show, Half Baked), The Approval Matrix will be tracking the highbrow, lowbrow, brilliant, despicable, and everything in-between.

Tuesday, August 12
4th and Loud (9pm, AMC, series premiere)
KISS was the original multi-faceted branding opportunity, so of course when Paul Stanley and Gene Simmons buy an arena football team, they are calling it the LA KISS. 4th and Loud will follow the trials and tribulations of trying to mix rock and roll with football, which sounds like an 80’s sports movie. I imagine Friday Night Lights, but instead of Explosions in the Sky doing the soundtrack, it’s KISS’s Alive! album.

Wednesday, August 13
Legends (9pm, TNT, series premiere)
Spoiler: star Sean Bean doesn’t die in this one, but his sense of self dies at the end of the pilot, which is a kind of a death (In the Tibetan Book of the Dead sense). I watched the pilot (as part of the opening night festivities at the ATX Television Festival), and it didn’t super grab me until the final two minutes, which gives me some hope that we aren’t just going to be watching a week to week procedural about domestic safety. It all felt very 24-Homeland (Howard Gordon executive produces, and worked on both) contrived. Bean plays an undercover FBI agent who questions his own sanity. Ali Larter (Heroes, Varsity Blues whipped cream bikini) co-stars, and in the pilot she had to play a stripper to ferry information to Sean Bean and I think I audibly rolled my eyes.

Franklin and Bash (10pm, TNT, season premiere)
The bros are back in town, bro! If this and Suits were on when I was a kid, I might have been a lawyer instead of someone who didn’t finish college and temps in a call center. I mean being a lawyer is all about wearing fancy suits and partying with your best friend, right?

Wilfred (10:30pm, FXX, series finale)
I think FXX’s existence up to now was just leading up to the launch of Simpsons World later this month, and boy do I feel sorry for the shows that ended up in its wake. The tale of a boy and his talking dog comes to an end tonight.

Thursday, August 14
Gang Related (9pm, FOX, season finale)
When will Terry O’Quinn star in a show that will last for more than a season? I’m sorry, that was rather presumptuous of me to assume that Gang Related (what the show is about is in the title) isn’t coming back for a second season. Remember how when LOST went off the air, and there was a NBC pilot with Terry O’Quinn and Michael Emerson starring together as retired black-ops agents? That would have been amazing.

Last Comic Standing (9pm, NBC, season finale)
In the future, if your talent isn’t validated by winning on a competition reality show, you will never get anywhere.

Saturday, August 16
The Ghost Inside My Child (9pm, Lifetime Movie Network, season premiere)
What may be crazier than the title is that this is the second season of a show about ghosts inside children (somebody call the Ghostbuster equivalent to To Catch a Predator, please.)

Silly Ghostbuster equivalent to Chris Hansen, a ghost pedophile cannot take a seat, they are a disembodied spirit!

Sunday, August 17
The Great Food Truck Race (9pm, Food Network, season premiere)
A show like The Great Food Truck Race is just another vector for people to talk about how hard they hustle, and then provide us with b-roll of people carnival barking in front of people at a park that they should check out their grilled cheese sandwiches in order to quantify their claim of hustle. The only time anybody should ever use the word hustle is when addressing the movement patterns of a middle school basketball team. The only reason hustle took off in the vernacular is ’cause ‘protracted exertion of effort’ never took off.