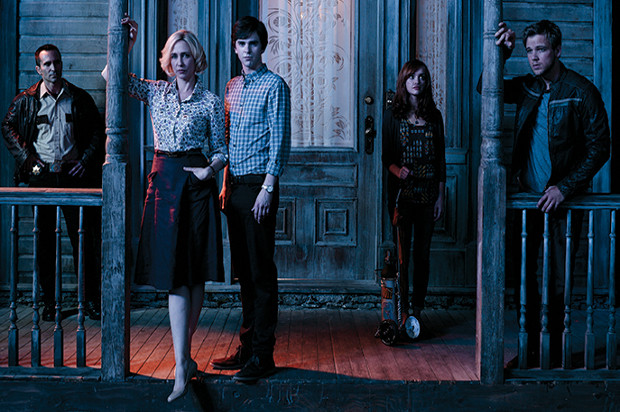 Monday, March 3
Almost Human (8pm, Fox, season finale)
Any new sci-fi on television is always a great thing, and it’s not like I’m looking for New Fringe, but so far Almost Human hasn’t transcended its premise, and is just a merely okay procedural show with shaky world building that name drops future tech in its case of the weeks (Bitcoin! 3D Printing! The CLOUD). Which is a shame, considering the easy-going chemistry of stars Karl Urban and Michael Ealy. No word yet if the show has been renewed for a second season, and while I would like to see what the writers would two with a second season, I wouldn’t be surprised to see the show go.

Bates Motel (9pm, A&E, season premiere)
Well, let’s just say that if Vera Farmiga was my mother I’d have some mother issues too. Because I’d want to bang her, get it (high fives, explosions, quiet resignation, loaded introspection)? The creepy prequel/re-imagining of the iconic Hitchcock film returns for a second season of pyschosexual tension and the unraveling of sanity.

This could be us, but you’re my mother.

Those Who Kill (10pm, A&E, series premiere)
Chloë Sevigny stars in this remake of the Danish series of the same name, as a murder cop who investigates the homicides of those who were killed by death. Also, human darkness, etc, etc, etc.

Tuesday, March 4
The Little Couple (10pm, Lifetime, season premiere)
Marriage can be challenge, and living with dwarfism can be a challenge, so why not combine the two and feature a married couple of dwarfs?

Wednesday, March 5
Bring It! (10pm, Lifetime, series premiere)
Can something be in a state of bringing while also simultaneously being brought? This is the question quantum mechanics hopes to answer. In the meantime, Bring It! features preteen and teenage hip-hop dancers in high pressure situations pertaining to dance. I’m not even mad.

Thursday, March 6
Saint George (9pm, FX, series premiere)
FX is starting to carve out a chunk for itself in the low rent, easy to produce sitcoms that star disgraced celebrities as syndication bait niche. George Lopez stars as a divorced entrepreneur whose uncle is Danny Trejo. And goddammit, Danny Trejo, you’re like bacon, because you make everything better.

Review With Forrest MacNeil (10pm, Comedy Central, series premiere)
Comedy Central has been on a roll lately. Comedian Andy Daly (MadTV, Eastbound and Down) plays the titular critic, who reviews life experiences (racism, addiction, etc) by actually living them. Which, hey, I think sends a positive life message out there, in its own way. Like, you know, living life. Or something.

Sirens (10pm, USA, series premiere)
Denis Leary is the Tom Hanks of people who work in public service jobs. Produced by Leary, Sirens is a sitcom that follows a group of Chicago EMTs who are great at their jobs but whose personal lives are a mess, the prayer to invoke blessings from the television sitcom gods.

Friday, March 7
Star Wars: The Clone Wars (12:01am, Netflix)
Along with all previous seasons of the animated Star Wars prequel, Netflix will be streaming the never before aired sixth and final season.

Saturday, March 8
Glory 14: Zagreb (9pm, Spike)
To begin with a geography lesson, Zagreb is the largest city of Croatia, as well as its capital. And Croatia is a country of contrasts! Glory features some of the best kickboxing in the world, and this fight card coming from the Crotian capital is headlined with goddamn legends Mirko “Cro Cop” Filipović vs Remy “The Flying Gentleman” Bonjasky.

Sunday, March 9
Once Upon A Time (8pm, ABC, spring season premiere)
I am still not entirely sure what the show is about, but I don’t confuse it with NBC’s Grimm anymore, which I suppose is a step up. Once Upon A Time actually came up in conversation with a friend, when we were discussing Michael Raymond-James post Terriers (never forget), and how it was a shame that aside from a couple of guest spots a show hasn’t scooped him up yet, all full time like. Well, turns out Michael Raymond-James joined the cast of Once Upon A Time in 2012, which is something great and something I am all for.

Cosmos: A Spacetime Odyssey (9pm, FOX, series premiere)
I am not sure how me from five years ago would have responded if you told me then that Seth Macfarlane would be the reason that Neil deGrasse Tyson would be hosting a thirteen-part reboot of the Carl Sagan classic with multiple simulcasts across the Fox and National Geographic networks. But if you take a second, it makes total sense. Does it make up for Dads? Well, let’s not ahead of ourselves.

Bar Rescue (9pm, Spike, spring season premiere)
Because every time Bar Rescue returns with new episodes, I always make a mention, lest Jon Taffer shuts down this column the way he has many a bar with awful alcohol pouring practices.

True Detective (9pm, HBO, season finale)
True Detective’s inky darkness and horrorific trappings not only got people reading more, but consumed the cultural zeitgeist, transforming everybody into Matthew McConaughey’s Rustin Cohle as they poured over every single minute detail, hoping to get some sort of bread crumb leading to resolution. Like Rust says, at the end of it, there’s a monster.