What’s with this year’s selection of Valentine’s Day movies? They’re almost all remakes. That’s like giving someone a box of knock-off chocolates called Sea’s Candy, or re-using a Valentine you once gave to someone else.

And sure, RoboCop isn’t exactly a Valentine’s movie, but it is a remake of something that certainly wasn’t screaming to be remade. I can’t imagine anything topping the insanity of Verhoeven’s original, or Peter Weller’s performance, or that guy melting after being showered with toxic waste, but I suppose the effects will be better, so there’s that. And if you’re a fan of “The Killing” star Joel Kinnaman, you get to look at half of his face for most of the movie, so there’s that too.

But how about we stop remaking good movies, OK? Let’s stick to remaking mediocre ones–like these next two! 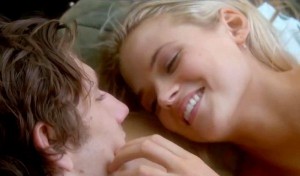 I’m a big fan of the original Scott Spencer book, and will be the first to say that the 1981 attempt to turn it into a movie was a colossal failure. Sure, Brooke Shields was a beaut, and it was easy to understand why a young man would become a tad obsessed with her. But Shields was young, and when it came to acting–and love–she was still learning the ropes. Rumor has it, to get her to emote during a lovemaking scene, director Franco Zeffirelli had to pinch her big toe off camera.

ANYWAY, I’d love to see a proper adaptation of the book, because it really is a gut-wrenching story of young, obsessive love, especially if the creators would be brave enough to include that one scene no one who’s read the book will ever forget, (fellow readers, YOU KNOW what I’m talking about). Alas, this is not that movie. Pretty people Alex Pettyfer (Magic Mike) and Gabriella Wilde (Carrie) star.

The original 1987 movie starring Demi Moore and Rob Lowe (and Jim Belushi and Elizabeth Perkins), was based on a 1974 David Mamet play called Sexual Perversion in Chicago. They had to change the title because they feared newspapers wouldn’t runs ads for a movie that sounded vaguely pornographic, and they had to change a lot of the play’s plot because HOLLYWOOD. This version makes even more changes, the biggest being that now it’s an all African American cast, headed by Michael Neely in the part Rob Lowe played, and Joy Bryant in the Moore part. Kevin Hart and Regina Hall round out the cast.

There are a lot of pretty well-known actors in this one–Colin Farrell, Russell Crowe, Jennifer Connelly, and William Hurt–but aside from some oblique TV spots and trailers, I have not heard a thing about it. That can’t be a good sign. The story spans centuries, might involve time travel, and kind of sounds like Cloud Atlas, which is also not a good sign. And also like Cloud Atlas, it’s based on a popular book. 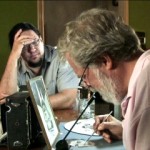 Teller of Penn and Teller fame directs this documentary about a Texas inventor’s attempts to uncover the mystery of Dutch artist Johannes Vermeer’s amazingly realistic portrayal of light. Sounds boring? Well, let me put it in Upworthy-speak: “The answer to that mystery may surprise you!”

A Japanese family finds out their six-year-old son was switched at birth and is not biologically theirs. Sounds like a set up for a hilarious comedy about clashing families! Except the opposite of that.