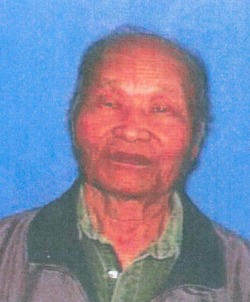 8:39 PM: An elderly man with dementia who disappeared from San Francisco’s Japantown area this afternoon was located at 46th Avenue and Judah Street this evening, according to police.

Yo Yun, 86, was located by Muni and is safe, according to Officer Gordon Shyy.

Yun, who speaks only Korean and suffers from severe dementia, became separated from his wife while walking near Post and Webster streets today, Shyy said.

8:01 PM: San Francisco police are searching for a missing elderly male who is at risk due to severe dementia.

Yo Yun, 86, was last seen near Post and Webster streets in San Francisco’s Japantown area, where he became separated while walking with his wife, according to Officer Gordon Shyy.

Yun speaks only Korean, suffers from severe dementia and does not have the capacity to find his own way home, Shyy said.

Yun is described as a Korean male, approximately 5 feet 5 inches tall and 130 pounds, with brown eyes and black hair.

He was last seen wearing a baseball hat with Korean and U.S. flag insignias on the brim, a multi-colored shirt, black jacket, gray pants and blue and white tennis shoes, Shyy said.

He was also wearing a white surgical mask that covers his face.