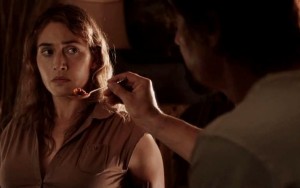 Here’s the thing: If the movie Labor Day were any good, it would have been released around the real Labor Day, and not in the movie dumping ground that is the beginning of the year. I had hopes for it, because I kind of liked the Joyce Maynard book it was based on. But it’s easier to swallow scenes like the one when the escaped felon ties up the lonely divorcee and then feeds her his homemade chili when you’re reading them on the page. Translating that to the larger than life movie screen just accentuates its weirdness, and not in a good way. I’m sure Josh Brolin, as the felon, and Kate Winslet, as the divorcee, do their best to rise above the Harlequin romance feel of the material, (although Kate Winslet’s American accent hasn’t improved much in the years since Titanic), but this just looks like a huge misstep for director Jason Reitman. I hope I’m proven wrong!

Apparently, all of Zac Efron’s tabloid worthy antics were merely elaborate method acting training for his new “bromantic comedy.” Dropping a condom on the red carpet; breaking his jaw during sex; checking into rehab–all done to prepare for his role in this epic comedy featuring two guys sticking their dicks in toilets. Oscars all around!

Speaking of Oscars, here’s your chance to see all the nominated shorts, thus getting an edge up on all your coworkers in that Oscar pool who are merely guessing by the titles which ones are about the Holocaust. Then you can use your winnings to help buy me a giant tub full of butter flavoring, with a sprinkling of popcorn, when there’s a marathon of the feature length documentaries down the line.

And, speaking of documentaries, here’s one that might find its way to next year’s list of nominees. Centered on the 12 O’Clock Boys, a pack of dirt bikers in Baltimore, who evade police while popping death-defying wheelies, the doc follows a kid named Pug who hope to join up. Its got some impressive cinematography, and the film took three years to make. Hoop Dreams on wheels?