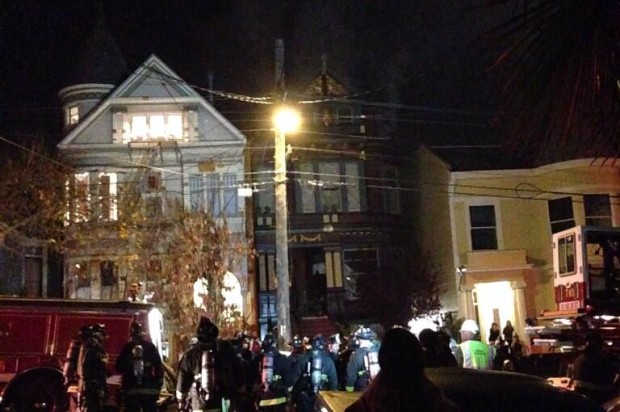 A man who was critically injured in a fire in San Francisco’s North of Panhandle neighborhood on Christmas night died the next day, according to the medical examiner’s office.

Randy Sapp, 59, of San Francisco, died at the hospital the day after a three-alarm fire burned at a home at 618 Baker St.

The fire was reported just before 9 p.m. Wednesday. Two residents were displaced and Sapp and his roommate suffered serious burn wounds.

The blaze caused an estimated $350,000 in damage to the building and destroyed $150,000 worth of contents, according to San Francisco fire officials.

According to a page set up on WePay, a fundraising website, former San Francisco Supervisor Christina Olague was living at the residence with Sapp and his partner Patrick Ferry.

According to the fundraising site, Olague was uninjured but lost everything in the blaze. She is staying with a friend while she works out her finances and a more permanent living situation.

The fundraising site said there are plans in the works for Supervisors David Campos, Jane Kim and Eric Mar to co-host a fundraising event for Olague.

The site had collected $4,445 from 64 donors as of this afternoon, including an unlisted amount from Supervisor Mar.

Olague was appointed to the Board of Supervisors after then-Supervisor Ross Mirkarimi was elected as San Francisco’s sheriff and took office in January 2012.

She lost to London Breed in her election bid that November to hold onto the supervisor seat in District 5, which includes the North of Panhandle, Haight-Ashbury, Hayes Valley, Fillmore and Western Addition neighborhoods.