Appealing TV: Chozen, American Idol, And Even More Flowers in the Attic 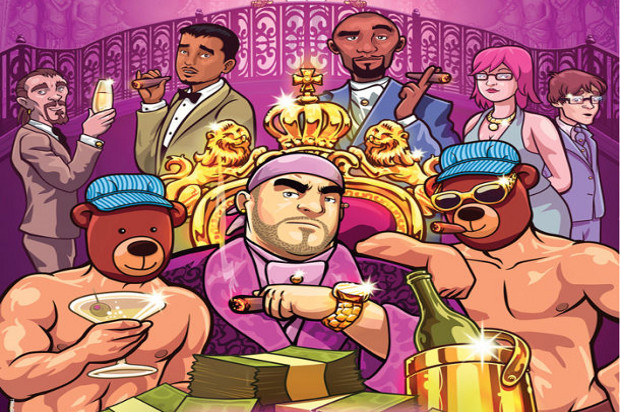 This year’s Golden Globes was my version of the 49ers/Panthers game. How about them Globes, though? Get your celebrity snark in? Look at us, using Twitter like the world’s water cooler. Shoutouts to Amy Poehler’s and Brooklyn 99’s wins.

Archer(10pm, FX, season premiere)
The fifth season of the spy cartoon will be a reboot for the high-brow/high-brow spy series. Something known as ‘Archer Vice’ will involve a shake-up in its first episode. And it will involve a bunch of cocaine. People might be able to guess where this is going.

Chozen (10:30pm, FX, series premiere)
From the minds who brought you Eastbound and Down and Archer, here’s a white gay rapper recently released from prison, trying to make it in the music business. Voices by Bobby Monihan, Hannibal Buress, Michael Pena, Method Man, Kathryn Hahn, and Nick Swardson.

This is on FX actual instead of FXX, because FX actually wants people to watch this.

Tuesday, January 14
Friday Night Tykes (9pm, Esquire, series premiere)
I bet whoever at Esquire that came up with the name for this show gave themselves scoliosis patting themselves so hard on the back. Pee-wee football in Texas. Friday Night Light Babies. Texas’s new chief export is documentaries chronicling football exploits within its borders.

Wednesday, January 15
American Idol (8pm, FOX, season premiere)
Twelve years later, and American Idol is trying to get to believe in a kinder, gentler American Idol. An Idol that wants to nudge us into the warm and fuzzy feeling of breaking new talent. Not breaking the spirit of awful and delusional audition types. Our judges for this year are Jennifer Lopez, Keith Urban, and Harry Connick Jr.

Suburgatory (8:30pm, ABC, season premiere)
ABC knows a thing or two about families and sitcoms. This delightful (like a Werther’s Original) show makes its midseason return. Did you know star Jane Levy was raised in Marin County? Speaking of, put your Jeremy Sisto/Jane Levy fan fiction away. Suburatgory is not that kind of show. The incest is coming later in this column.

Duck Dynasty (10pm, A&E, season premiere)
Ok, ok, you already know the score, and I shouldn’t write more about the return of this show any more than I have to.

Thursday, January 16
Here Comes Honey Boo Boo (9pm, TLC, season premiere)
A few days ago, the Thompson family, the stars of the TLC reality program got into a car accident. And it was scary for them! And Alana Thompson, the titular Honey Boo Boo suffered a headache. That’s all you really need to know, I guess.

(thank you for indulging me)

This reality series from TNT has a former criminal investigator and prosector going around America solving unsolved cases. Like an Incredible Hulk of justice not served.

Saturday, January 18
Flowers in the Attic (8pm, Lifetime)
Heather Graham stars in this all too unnecessary re-adaptation of the 1979 book and 1987 movie starring Kristy Swanson. Remember: Incest is wincest!

The Moaning of Life (10pm, Science)
I thought this was was a cheeky show about sex, but instead it’s a continuation of Karl Pilkington’s travelogue misadventures, those that began with An Idiot Abroad. Karl Pilkington, known as the buffoon of a co-host/producer on The Ricky Gervais Show, is staring middle age in the face and will confront it the only way he knows how, by traveling.

Sunday, January 19
Sherlock (10pm, PBS, season premiere)
Well, it’s on PBS for people who didn’t already, uh, find alternative means to catch this season’s episode that aired in the UK a couple of weeks ago. Seeing that it is PBS, I reckon it is for the over fifty set who think that Tumblr is something you put rocks in. You know the deal, Benedict Cumberbatch and Martin Freeman embody the public domain Sir Arthur Doyle characters, scripted by Doctor Who scribe Steven Moffat and cast member/co-creator Mark Gatiss. Let the Tumblr .gifs appear, and people resume talking about getting pregnant by Mr. Cumberbatch’s sexy gaze.

#Richkids of Beverly Hills (10pm, E)
I decided to indulge the new E reality series’ stylized hashtag, as kind of a reminder of the absurdity of the convergence of privilege and oversharing (Peep the Rich Kids of Instagram Tumblr). Sure, it’d be easy to turn our nose up in disgust at the tone-deaf indulgences of the spawn of the rich. But me? I crack a smile. Do you want to really enact social change? Murder the parents of these rich kids in order to create an entire generation of wealthy vigilantes bent on justice.

The Following (10:30pm, FOX, season premiere)
The Kevin Bacon helmed schlockfest returns from an improbable second season. The first season was akin to watching a child put on their parents’ clothes and pretend to be cool adults. Its wanton deployment of violence sans any real character or plot was a childish, cynical, dour, and hollow exercise in trying to mimic its more mature and cooler basic cable cousins.

Looking (10:30pm, HBO, series premiere)
Imagine Girls, but with dudes, and in San Francisco instead of New York. /blithe

More importantly, will Jonathan Groff be hanging dong in Looking, and a year from now at the TCA Winter Press Tour, Tim Molloy will ask Groff why he’s hanging so much dong, and everybody will get frothed into an uproar? Also, Scott Bakula stars, which gives me another chance to say ‘Al, why haven’t I leaped yet’ out loud.

RETURNING:
Keeping Up with the Kardashians (9pm, E)

See you Next Monday!