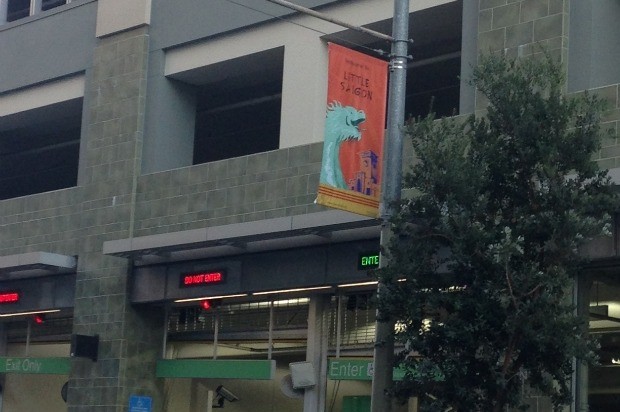 New street banners are flying in San Francisco’s Little Saigon as part of an improvement project for the Vietnamese stronghold in the Tenderloin neighborhood.

Twenty banners made through a design competition sponsored by the North of Market/Tenderloin Community Benefit District went up Monday along the Larkin Street corridor between McAllister and Geary streets.

The banners designate the area as “Little Saigon” where many Vietnamese-American businesses and restaurants are based.

The banners replace a set that was installed nine years ago and have since become tattered and worn, community benefit district spokeswoman Susie McKinnon said.

“(The banners) brand the neighborhood as a unique destination,” she said.

As part of a $20,000 grant through the San Francisco Mayor’s Office of Economic and Workforce Development, street cleanings have also been making the area more attractive and safer, she said.

She called Little Saigon an “integral part of the Tenderloin” and the new banners are “about making it a healthier, more vibrant place to live.”

Six designers submitted banner artwork, with Collison’s winning the approval of merchants and residents in the area. The design has a dragon motif and includes a drawing of a famous Vietnamese marketplace building.

Collison said he did some research into Vietnamese culture and that he frequents the area usually for pho, a Vietnamese soup.

“It’s a fun neighborhood,” he said.

He said his design goals were to “celebrate the Vietnamese community and be attractive for Little Saigon.”

He said he wanted to make something “that would create an interest in the area.”

When he walked down Larkin Street this afternoon and saw his banners along posts he said “it’s amazing” and that he was “dumbfounded.”