What An Amazing Day For Batkid, And For San Francisco (Photos, Video)

Peace has been restored to San Francisco after a young boy recovering from leukemia fought alongside his favorite superhero Batman in an adventurous day made possible through the Make-A-Wish Foundation.

Miles, a 5-year-old kindergartener from Tulelake in Siskiyou County, was diagnosed with leukemia when he was 20 months old and ended chemotherapy treatment in June, with the cancer now in remission, Make-A-Wish Greater Bay Area executive director Patricia Wilson said.

“He already battled a villain in real life. He fought cancer and won,” Wilson said.

The nonprofit arranged to turn San Francisco into “Gotham City,” where Miles would embark on a series of rescues and make his wish to be Batman come true. 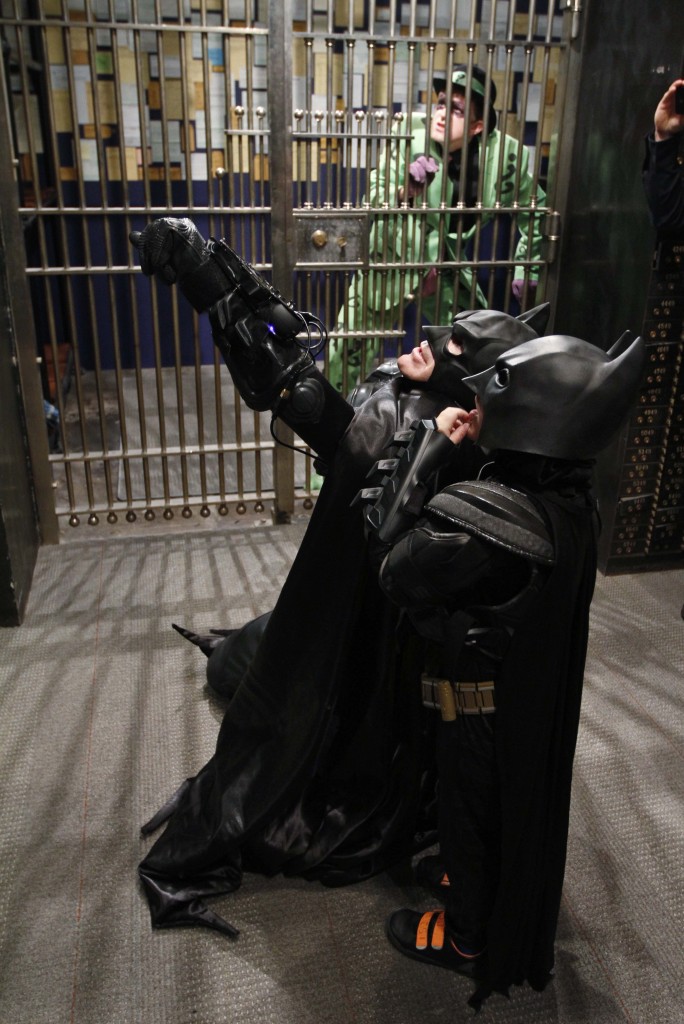 Five-years-old Miles, from Tule Lake, Calif., is dressed in a Batman costume in San Francisco, Friday, November 14, 2014. Miles, who wants to be a Batman, will embark on a series of crime-solving adventures when San Francisco is converted into “Gotham City” as part of a Make-A-Wish Foundation event. He is in a fight on his own in his battle against leukemia since he was a year old. He is now in remission. (Photo: Make-A-Wish Foundation/PaulSakuma.com)

Thousands of people from around the Bay Area gathered at multiple sites throughout the city to cheer on the boy, who was dressed in a Batman costume complete with a mask and cape.

The day started off with a 10 a.m. call from San Francisco police Chief Greg Suhr to alert him of a damsel in distress tied on the San Francisco Municipal Railway Powell-Hyde cable car line.

The duo scrambled to Nob Hill to save the damsel, who was facing an oncoming cable car at Green and Hyde streets as the crowd yelled “Go Batkid!”

San Francisco resident Jesse Garcia came to watch the spectacle that was only three blocks away from his home and said it was great to see the community come out to support Miles. 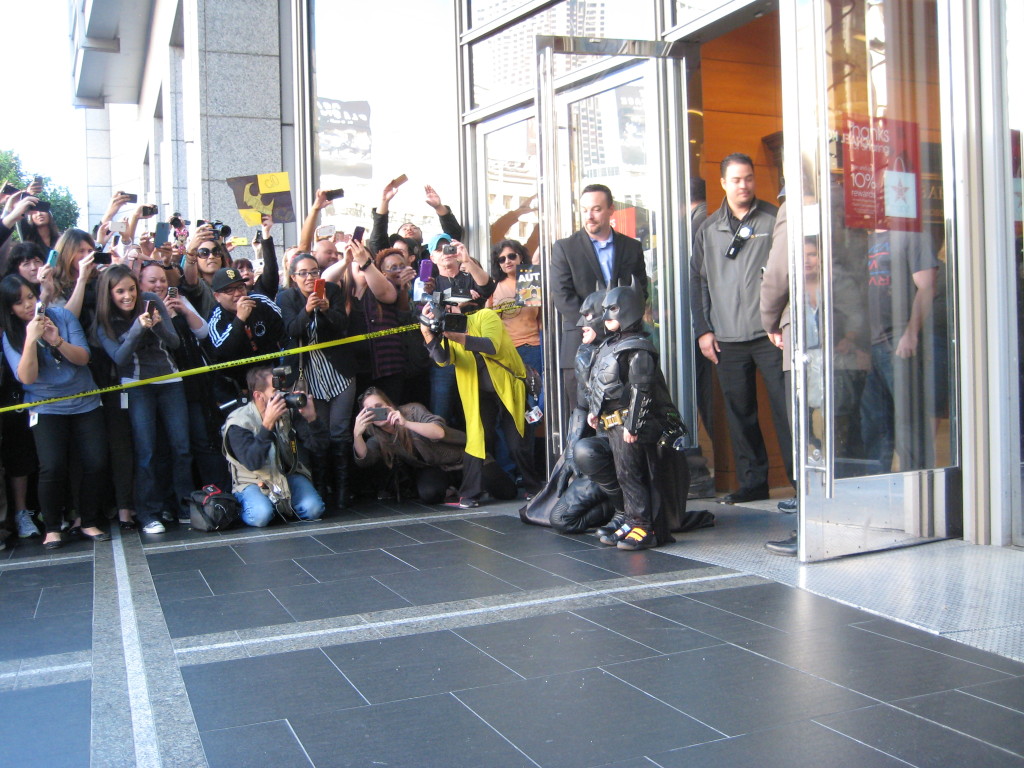 Batkid and Batman emerge from Macy’s to a cheering crowd on
their way to rescue Lou Seal from the Penguin at AT&T Park. PHOTO BY MELISSA MCROBBIE

Miles untied the damsel, who had been tied to a green box filled with question marks by the “The Riddler,” one of Batman’s villains.

Danielle Luscombe, a friend of Miles’ family, said the boy did a great job in the rescue. 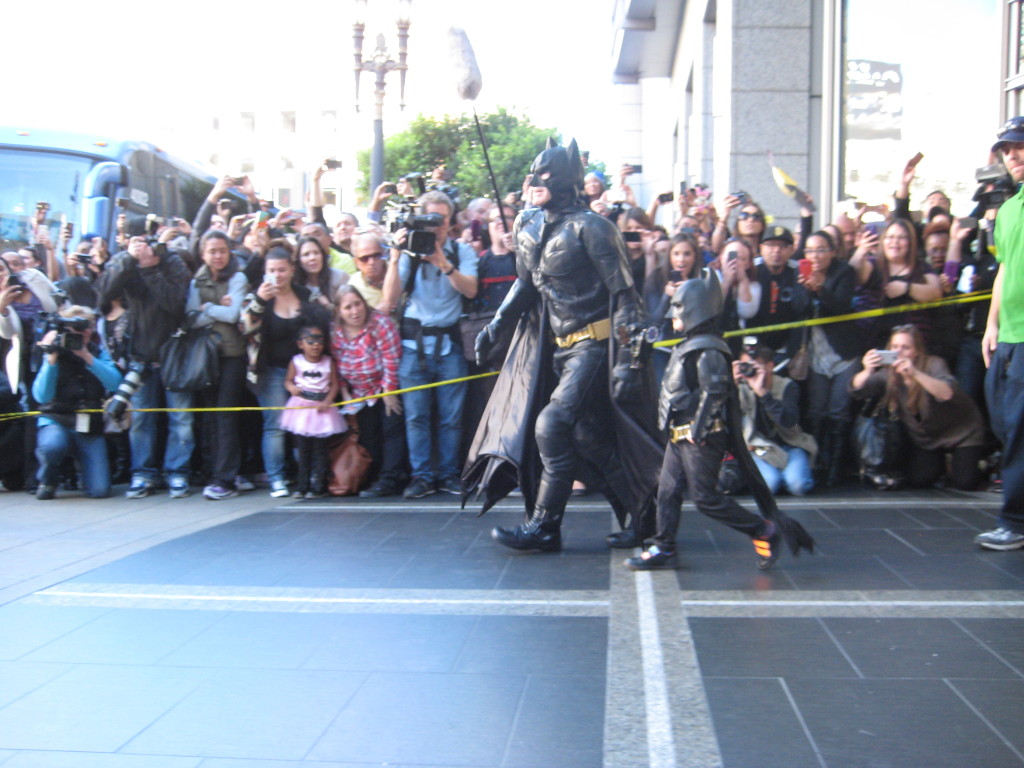 Batkid and Batman head off to rescue Lou Seal from the Penguin
at AT&T Park. PHOTO BY MELISSA MCROBBIE

People also crowded around the Financial District as the duo entered a bank at 550 Montgomery St. to look for the Riddler.

Inside they found the famed villain, who tried to steal jewelry and money but Miles locked him in a barred room with nowhere to escape.

With two rescues down, the pair enjoyed a lunch at Burger Bar overlooking Union Square and watched a flash mob performing to Journey’s “Don’t Stop Believin’” in yellow and black clothing.

The crowd then alerted Miles of the kidnapping of San Francisco Giants mascot Lou Seal by Batman’s other archrival, “The Penguin,” and the pair made their way to AT&T Park. 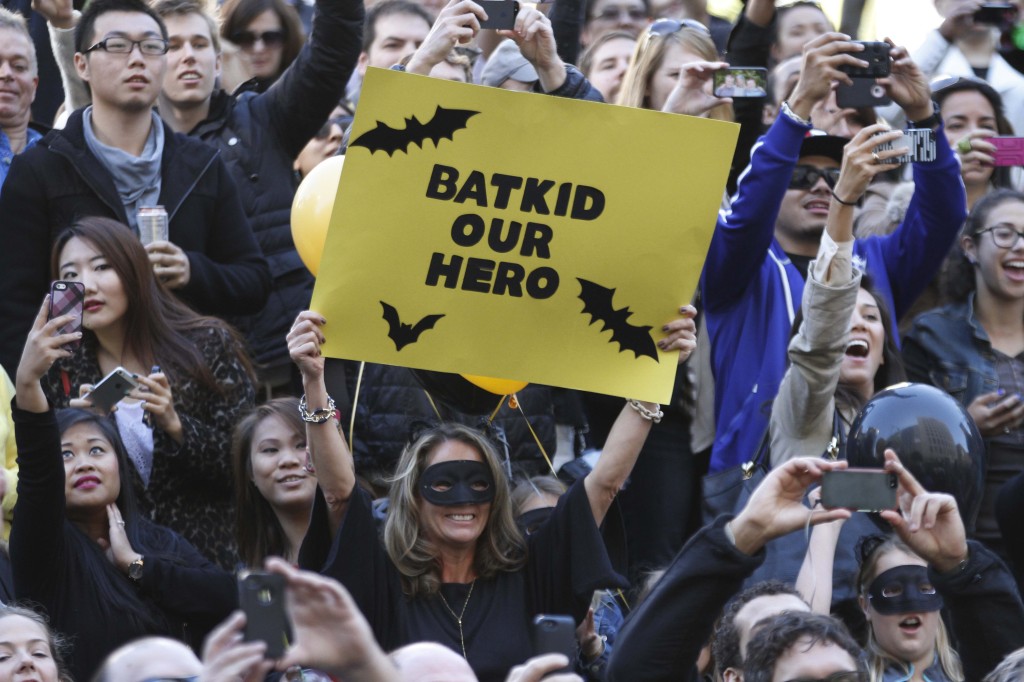 After a serious of obstacle courses at the park’s promenade level, Miles slid down the Coca Cola bottle slide to find “The Penguin” at the end.

Lou Seal was found tied up to a batting cage nearby at a small baseball diamond for children and Miles came to the rescue and set the mascot free. 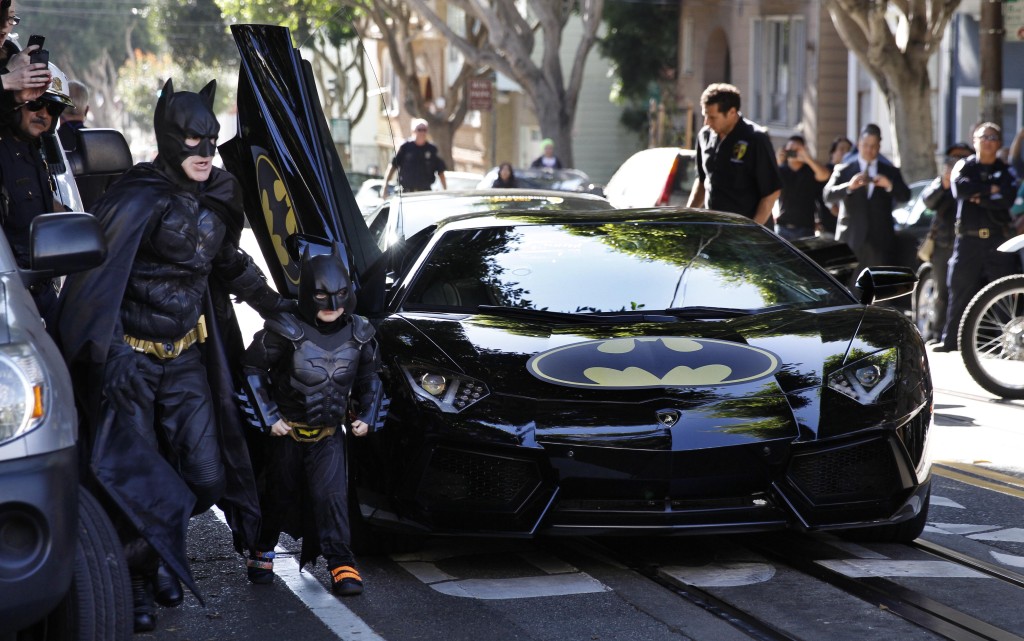 Batman and Batkid then arrived to City Hall, where Miles proudly waved a fist in the air as hundreds of people cheered him on with a hero’s welcome as he stood on stage at Civic Center Plaza.

A plane flew overhead with the message “Wishes do come true SF Batkid.” 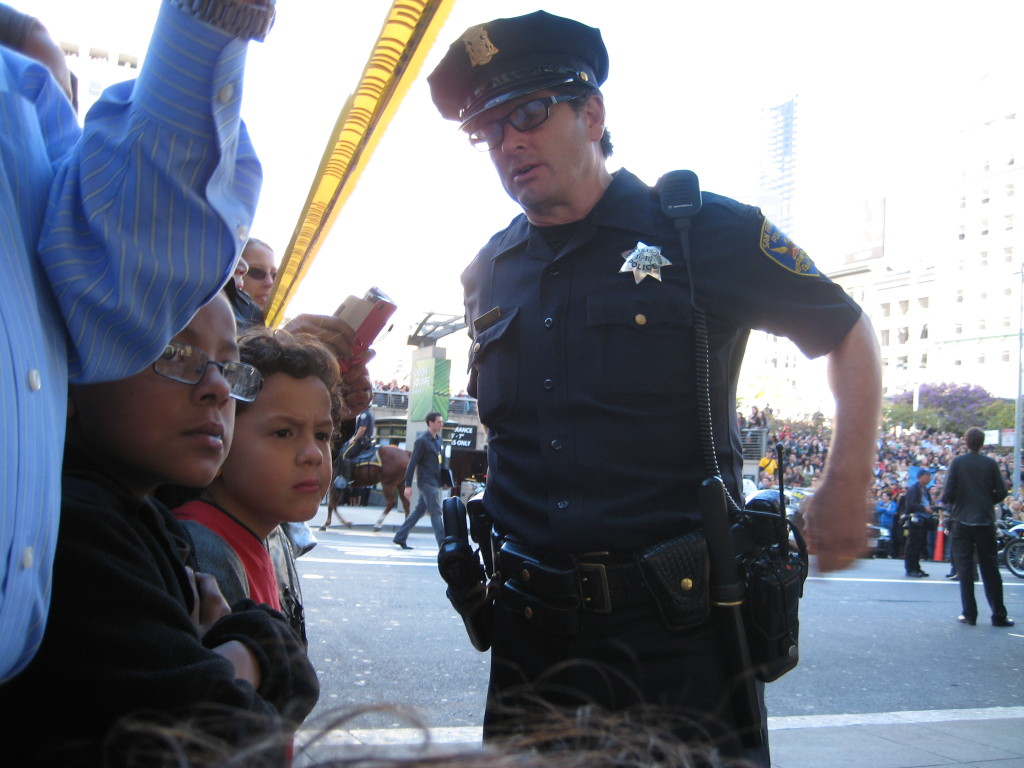 A San Francisco police officer chats with young Isaiah and
Manuel as they wait outside Macy’s for a glimpse of Batkid. PHOTO BY MELISSA MCROBBIE

San Francisco Mayor Ed Lee welcomed everyone to Gotham City Hall and thanked Miles for all his hard work.

Lee also presented Miles with a huge gray key to Gotham City, a framed proclamation and an advanced issue of Saturday’s “Gotham City Chronicle” with the headline “Batkid Saves City.”

“While we wish we can erase the pain your family has experienced, we hope this is an experience you’ll remember forever,” Lee said.

Young onlookers Isaiah and Manuel crane their necks to catch a
glimpse of the Penguin as he emerges from the Union Square underground
parking garage in a Bentley. PHOTO BY MELISSA MCROBBIE

U.S. Attorney Melinda Haag introduced herself as the prosecutor of Gotham City and thanked Miles for helping the U.S. Department of Justice capture “The Riddler” and “The Penguin,” two bad guys they’ve been trying to arrest for years, she said.

She presented Miles with a framed formal indictment listing the villains’ charges.

“We hope because of you they’ll be spending a long, long time in jail,” Haag said. 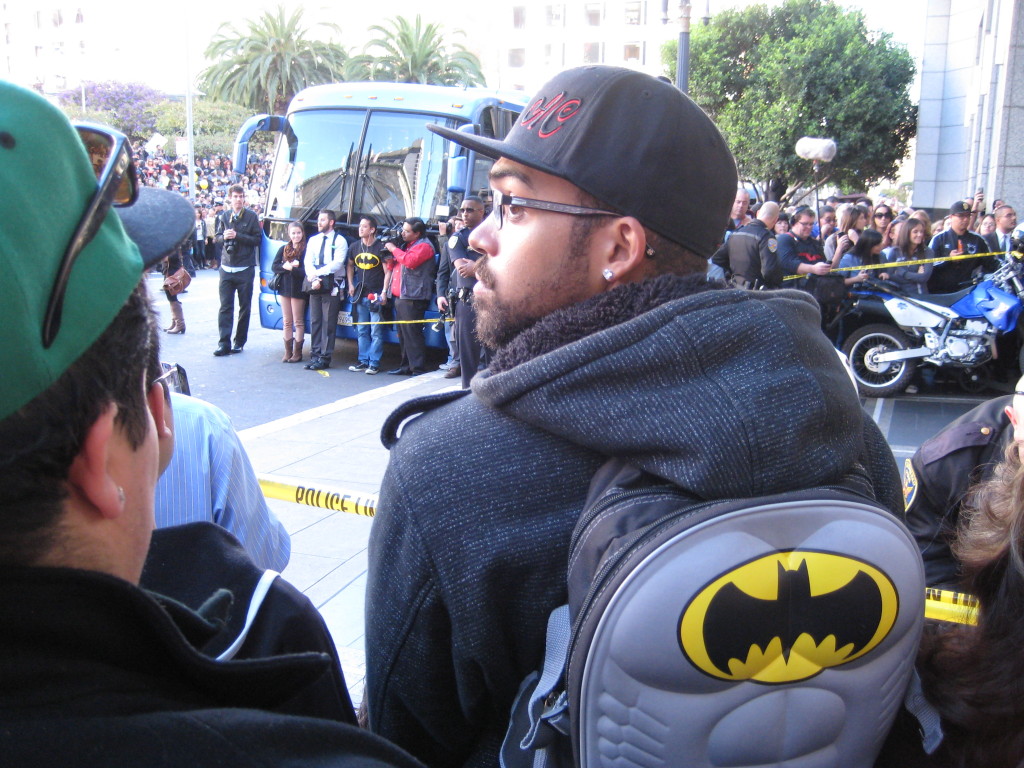 Adam Clay, of Vallejo, brought his Batman backpack today as he
and a friend headed to San Francisco’s Union Square to catch some of the
“Batkid” activities. PHOTO BY MELISSA MCROBBIE

President Obama also joined in on the action and posted a video on Vine with the message “Way to go Miles, way to save Gotham.” 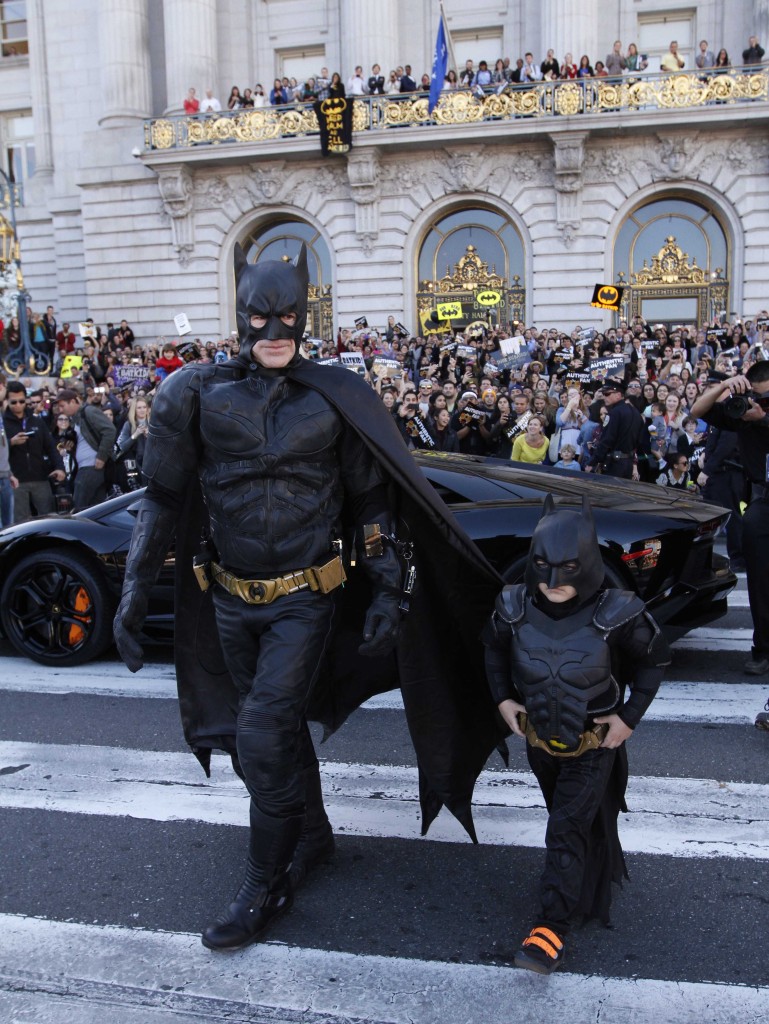 Suhr, the police chief, expressed his “deepest gratitude for outstanding bravery” to Miles and presented him with a $10,000 check from Kid Monarch Clothing Company, which designed “Batkid” T-shirts with sales benefiting the Make-A-Wish Foundation. 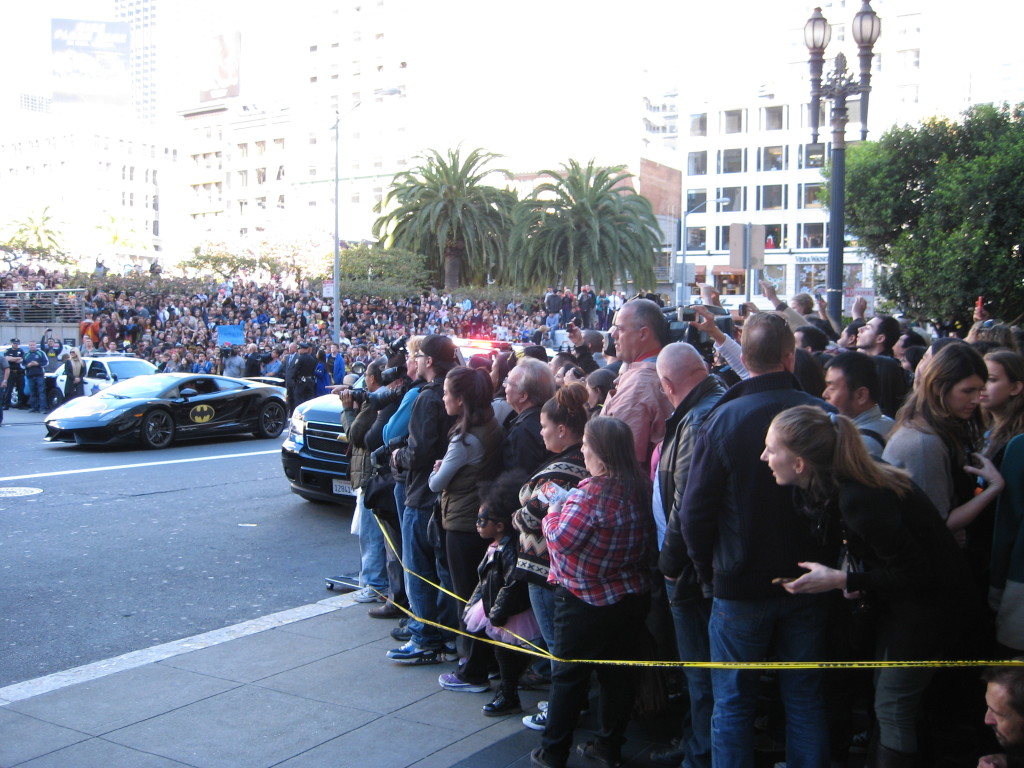 Crowds watch as Batkid heads off in the Batmobile to rescue Lou
Seal from the Penguin at AT&T Park. PHOTO BY MELISSA MCROBBIE

Walnut Creek resident Brianna Hall was at City Hall with her son, 5-year-old Henry and daughter, 3-year-old Eme.
Hall said Henry is a big fan of Batman and owns many costumes. His outfit bore the Batman logo from head to toe, including his socks.

Ramirez, 10, was born with a cardiac problem and three years ago, the Make-A-Wish Foundation helped fulfill her wish of becoming famous with activities including singing lessons, a photo shoot, music video and debut party.

The mother and daughter were supporting Miles today because they understand what his family has gone through. 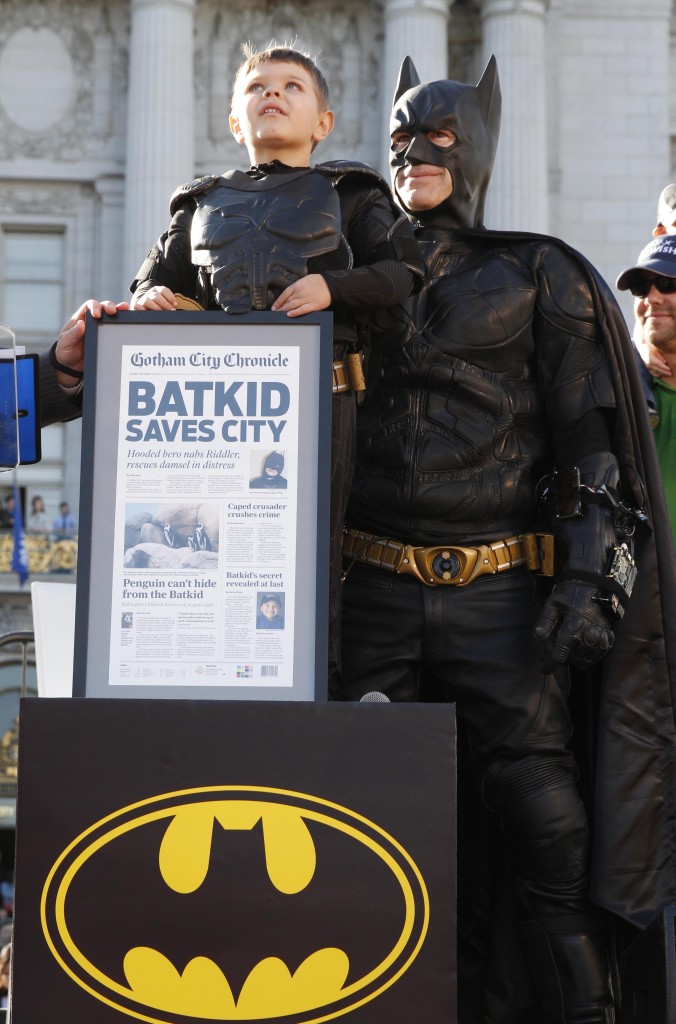