Shoppers Warned Away From Lead-Filled Captain America, Other Dangerous Toys 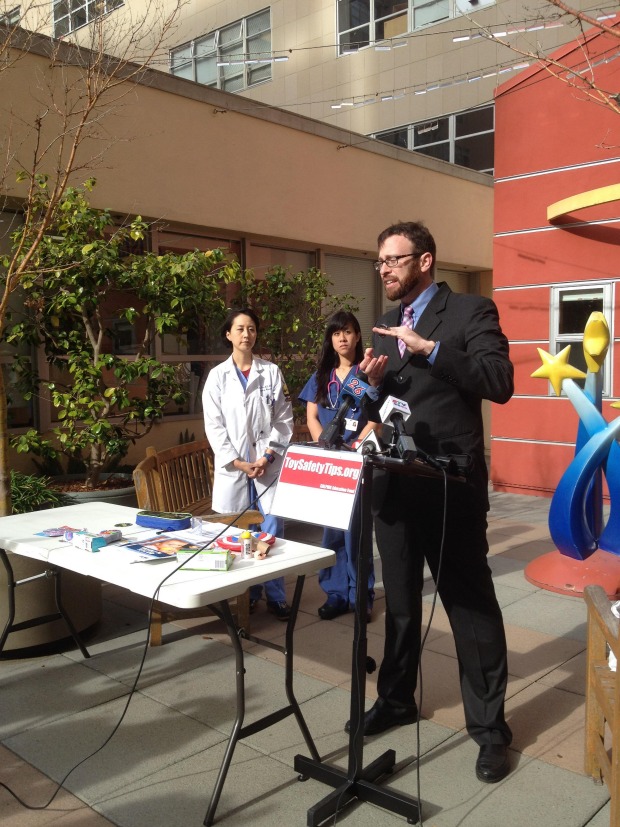 Shoppers flooding stores to buy presents this holiday season should watch out for dangerous toys that may threaten children’s health, a consumer group warned today.

The California Public Interest Research Group released their 28th annual “Trouble in Toyland” report this morning during a news conference in San Francisco that shows while federal standards have improved since 2008 but there are still hazardous products going unregulated.

Dr. Nisa Atigapramoj, a physician at UCSF Benioff Children’s Hospital, said a cardboard tube about the size of a toilet paper roll can be used to measure whether small toys are appropriate for children.

Jon Fox, a Consumer Advocate at CALPIRG, demonstrated that detachable toys as a whole would pass the cylinder test but in parts would easily fit inside the tube.

Children have choked on items bigger than the tube and CALPIRG is calling the commission to widen the diameter to 1.75 inches, Fox said.

Dr. Christine Cho, director of the pediatric emergency department at UCSF Benioff Children’s Hospital, said she has seen many child patients who have swallowed small toys.

Most cases show that toys get stuck in a child’s airways and esophagus which can be life threatening.

CALPIRG’s report also showed certain toys with excessive levels of toxins can threaten a child’s health in the long-term.

A Marvel Super Hero Squad Captain America Soft Shield made of vinyl was found to have 2,900 parts per million of lead, 29 times the legal limit, Fox said.

“There is no safe level of lead in products,” CALPIRG Consumer Advocate Jon Fox said.

There are other products used by children that are not considered a toy.

A Teenage Mutant Ninja Turtles pencil case contained 150,000 parts per million of pthalates, a group of chemicals that increases the flexibility of plastic and vinyl.

The federal limit of safe exposure to the toxin is 1,000 parts per million.

Exposure to such toxins may lead to mild illness and developmental problems over a span of time, Cho said.

Magnets can also result in severe internal damage if swallowed by a child, Fox said.

According to estimates from the CPSC there were 1,700 cases among children between the ages of four and 11 ingesting magnets from 2009 to 2011.

If a child swallows more than one magnet the objects may try to attach internally creating holes in the intestine, Cho said.

To avoid any health hazards from toys, Cho recommends parents to take CPR classes, judge how their child will use a toy before purchasing it and provide supervision as their child is playing.

Parents and caregivers are also cautioned to read toy labels and report any unsafe toys or toy-related injuries to the CPSC at www.cpsc.gov or www.saferproducts.gov or over the phone at (800) 638-2772.