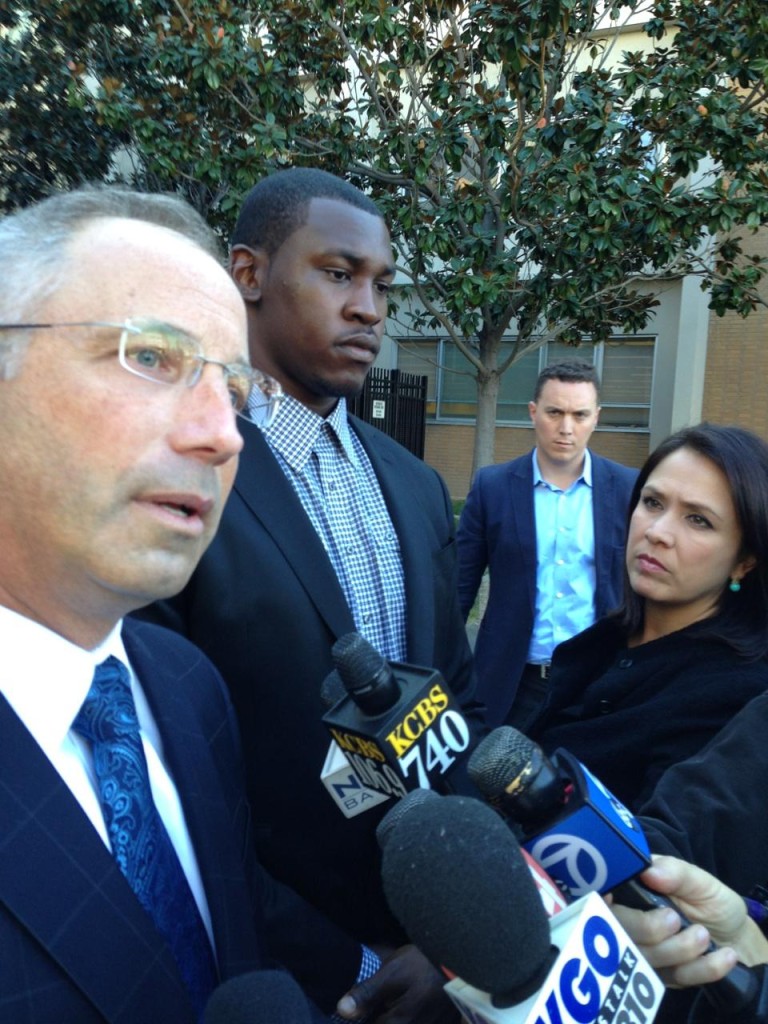 San Francisco 49ers linebacker Aldon Smith stands next to
his attorney, Josh Bentley, after his court appearance in San Jose On November 12, 2013.

Smith, dressed in a dark suit and white shoes, only answered “yes” to a couple of procedural questions posed during his brief arraignment on the charges by Judge Daniel Nishigaya.

The judge set Smith’s next hearing on the felony charges for Jan. 15 and set the same date to hear a separate DUI case against Smith, that was to have been heard on Nov. 19, to eliminate unnecessary multiple court dates, Deputy District Attorney Brian Buckelew said.

The January date for both cases, which is after the end of the 49ers’ 2013 football season, works for Smith and gives prosecutors and defense lawyers time to review discovery and evidentiary issues, Buckelew said.

“It’s not uncommon to work around someone’s schedule and it’s not unusual to have a delay like this in the beginning of the case because remember, no discovery has yet been provided,” Buckelew said.

Smith, in addition to his not guilty plea, waived his right to appear in future discovery hearings and will not have to show up on Jan. 15 for either the gun case or the DUI matter, Buckelew said.

“I think it’s safe to say he will not be there,” Buckelew said.

Smith, who declined requests for comment, stood silently outside the court with his lawyer Josh Bentley, who told reporters that his client wants to tell his side but would not make a statement “out of respect for the criminal justice system.”

Smith and several others accompanying him then walked quickly with reporters following them to the edge of Hedding Street where they were driven away in a white Lexus SUV.

On Oct. 30, the 49ers star defensive end posted $75,000 bail in San Jose in answer to a warrant for his arrest on suspicion of possessing three assault rifles that carry felony charges in California, Buckelew said.

The charges were filed on Oct. 9 after technicians from the Santa Clara County Crime Laboratory’s firearms unit, which evaluates the permissibility of weapons under California law, determined the three rifles were illegal assault weapons, Buckelew said.

The rifles were among five unregistered rifles recovered by sheriff’s deputies in 2012 from the bedroom of the home Smith rented that year in an unincorporated area east of San Jose.

According to prosecutors, Smith purchased the three rifles on two occasions in 2011 while in Arizona. Two were bought in Phoenix on Dec. 10 of that year, a day prior to the 49ers’ game against the Arizona Cardinals.

When asked how Smith may have transported the assault weapons across state borders to California, Buckelew declined comment.

He also said that it was too early to discuss whether prosecutors would consider giving Smith a plea deal in the case.

Last year, sheriff’s deputies searched Smith’s home after a nighttime party Smith hosted there on June 29, 2012, that stretched into the early morning hours of June 30, 2012.

After the party attracted a large crowd, Smith fired a .45-caliber handgun into the air to disperse it.

Then, at least one partygoer shot and wounded two people at the party and Smith suffered minor injuries when he was allegedly stabbed by Steven Raymond Barba, a reputed gang member who has since been charged by the district attorney’s office with assault with a deadly weapon.

The two shooting victims have filed civil suits in San Jose against Smith and his former 49ers teammate Delanie Walker, who was with Smith at the 2012 party.

On Sept. 20, San Jose police arrested Smith on suspicion of driving under the influence of alcohol after he crashed his car into a tree outside a home on Bentley Ridge Drive, according to police.

Smith, who was also arrested for possession of marijuana, was later released from the county jail in San Jose after he posted $5,200 bail, according to the sheriff’s office.