Appealing TV: The Walking Dead, Witches in NOLA, and The CW Gonna CW

American Horror Story Coven Arrow Beauty and the Beast Bridezillas Ghost Hunters Hart of Dixie Less Than Kind Once Upon A Time In Wonderland Supernatural The Tomorrow People The Walking Dead Vanilla Ice Goes Amish by Paolo Sambrano | October 7, 2013 9:08 am | in Culture | 0 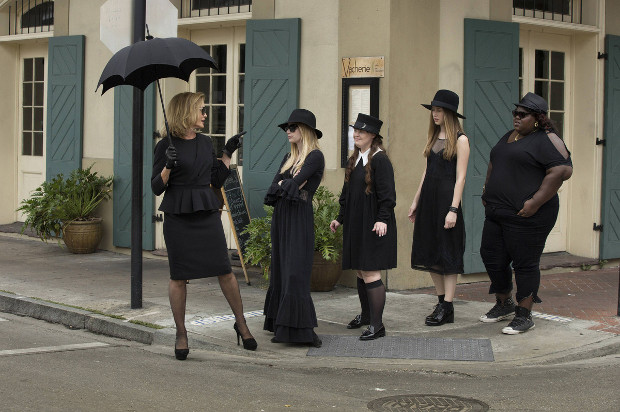 In its place? Reruns of Scandal.

This week, bringing up the rear, is The CW with its non-vampiric television offerings for the fall.

Beauty and the Beast (9pm, CW, season premiere)
The original Beauty and the Beast starring Linda Hamiltion and Ron Perlman came out one year after my birth, so you’ll have to excuse my limited knowledge of it. But from what I’ve seen of the original show, and from what I’ve seen of the reboot starring Smallville’s Kristin Kreuk and Jay Ryan, I can imagine this is how people who decried the Battlestar Galactica remake must have felt.

From the Wikipedia description of Jay Ryan’s beast character: “He has the ability to turn into a creature very human-like in appearance yet has a beastly mind, he turns into the creature whenever he is in pain or anger.”

THAT’S NOT THE SAME THING YOU CHEAT.

I don’t wanna start any blasphemous rumors, but I think that this getting to a second season shows that the television gods have a sick sense of humor.

The Tomorrow People (9pm, CW, series premiere)
The Tomorrow People was originally a 70’s children’s show that aired on UK’s ITV, which was then rebooted in the early 90’s (unlike 80’s Beauty and the Beast, I do remember this), and was again rebooted in the early aughts as a series of audio plays. For its fourth incarnation, this time on The CW, the show does feature the same conceits (teenagers discovering they are the latest step in human evolution, developing powers), only in a sexy teen fashion that will leave room for plenty of melodrama. As you do on when you’re on The CW.

Ghost Hunters (9pm, SyFy, season premiere)
“Did you hear that? What was that? That is insane!” – loop for forty-five minutes in a dark room, and you have pretty much every episode of Ghost Hunters ever.

American Horror Story: Coven (10pm, FX, season premiere)
The third season of Ryan Murphy’s horror anthology season (characters from previous seasons do not reappear, although the same actors may reappear as completely different characters) focuses on witches in New Orleans. Jessica Lange and Sarah Paulson from seasons one and two return. Joining her this season are Angela Bassett, Kathy Bates, Frances Conroy, Emma Roberts, Gabourey Sidibe, and Lily Rabe. Treme must be feeling like the Hydrox of television shows set in New Orleans.

Less Than Kind (10:30pm, Audience, season premiere)
The family-drama-comedy set in Winnipeg begins its final season. It really is great television, with loads of pathos and humor. Character actor Maury Chaykin was a lead before his sudden death in 2010. Executive Produced by Kids in the Hall’s Mark McKinney (who also worked on the Canadian comedy Slings and Arrows). The “only” way to see this is on DirecTV’s Audience Network.

Thursday, October 10
Once Upon A Time In Wonderland (8pm, ABC, series premiere)
Riffing on the tale of Alice in Wonderland, the Once Upon A Time spin-off has the voice of John Lithgow as the White Rabbit and LOST’s Naveen Andrews as Jafar, which really just looks like the single most unfortunate cosplay ever.

Friday, October 11
Bridezillas (9pm, WE, series finale)
But how is Walt going to use the M60? (No, I’m not going to stop using Breaking Bad to describe series finales).

Saturday, October 12
Vanilla Ice Goes Amish (10pm, DIY, series premiere)
This show is the warmed over remains of celebrity fascination, combined with our passing interest in the Amish. This show is exactly what it sounds like, with Vanilla Ice learning craftsmanship from the Amish. Here’s a series of clips of the show set to an acoustic cover of Ice Ice Baby, because of course.

Sunday, October 13
The Walking Dead (9pm, AMC, season premiere)
Hey people with Twitter! Keep tweeting your dumbass ideas for spin-offs of shows you currently watch, because it looks like television executives are starting to listen! Because they’ve run out of ideas, and they know you’d probably watch already! I blame you for the plan to split the final season of Mad Men into two parts, the Better Call Saul Breaking Bad spin-off/prequel, and a concurrent Walking Dead spin-off featuring characters who already exist in the show.

Season four of the sometimes capable of brilliance zombie show kicks off with new showrunner Scott Gimple (who wrote the best episode of the series, season three’s Clear). Joining the cast is D’Angelo Barksdale himself, Lawrence Gilliard Jr. Aw man Dee, why did you end up in a prison again? (Wire season two spoilers, but c’mon yall)

Be sure to have your “snarky” Chris Hardwick tweets ready, as Talking Dead returns as well!