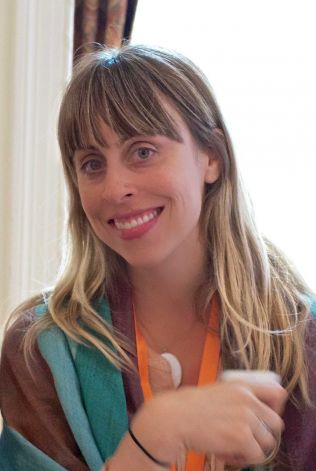 A woman who was fatally struck at a park in San Francisco’s Bernal Heights neighborhood on Thursday was a Zen monk, while the city employee who allegedly ran her over with a truck and drove away had a daughter die in a traffic accident earlier this year.

Christine Svanemyr, 35, who was lying in the grass at Holly Park with her 11-month-old daughter, was run over at about 2:20 p.m. Thursday, allegedly by 57-year-old San Francisco Recreation and Park Department employee Thomas Burnoski, police said.

Burnoski, a San Francisco resident who was driving a green Rec and Park maintenance truck, allegedly fled the scene but was located a short time later with the vehicle and was taken into custody, according to police.

He was arrested on suspicion of vehicular manslaughter and felony hit-and-run and remained in county jail this afternoon on $315,000 bail, police and sheriff’s officials said.

Svanemyr, a Daly City resident, suffered major head and chest trauma and was taken to San Francisco General Hospital, where she was pronounced dead, police said. The baby was not injured.

Svanemyr had worked as a director of enrollment with the Bay Area-based life coach training group New Ventures West since 2003.

A statement released by New Ventures West today said, “Christy was full of brilliance, passion and kindness. Her high energy and infectious enthusiasm impacted everything and everyone she touched. Those who knew her say it was impossible not to be moved by her.”

According to the company, she was an ordained Zen monk and lived at the Big Mind Zen Center in Salt Lake City for nearly four years with her husband Vegar, who also works at New Ventures West as director of communications.

She received a bachelor of arts degree in anthropology and sociology and a bachelor of science degree in ecotourism and recreation management from West Virginia University, according to her company biography. She graduated from the school in May 2001, university officials said.

Her daughter, Isa Amalie, was born in October 2012. She is also survived by her parents, George and Holly Moses, and her sister and brother-in-law, Suzanne and Chad Kanick, according to the company.

As for Burnoski, he has been a Rec and Park employee since 2006, department spokeswoman Sarah Ballard said.
He had a 20-year-old daughter, Tiffany Burnoski, who was killed in a traffic accident in April.

According to an online memorial page, she was in an accident as she was driving to San Francisco from California State University, Fullerton on April 6.

Her boyfriend and two younger siblings were also injured in the crash and were treated at a hospital, according to the website.

CSU Fullerton officials said she majored in civil engineering at the time of her death.

According to the memorial page, she was survived by her parents, an older sister and four younger siblings.
An organizer at the Berkeley Lawn Bowling Club, who asked to remain anonymous, said Thomas Burnoski joined the club last year.

Burnoski was scheduled to compete in a lawn bowling tournament in Palo Alto this Sunday, the club member said.

Burnoski had competed in the Lawn Bowls National Championship in San Diego in October 2012 on behalf of the Berkeley club, as had his son.

According to his championship biography, that was his sixth national competition.

However, the Berkeley club member said Burnoski had been less active in the club after his daughter died in April.

San Francisco Supervisor David Campos issued a statement today about the death of Svanemyr at Holly Park.
Campos said he is working with Recreation and Park and police officials to find “answers as to how this horrific event could have happened in a place where families and children expect to be safe and protected.”

Campos said, “I, like the rest of the city, am dismayed and upset that a new mother was taken from her family in such a senseless way.”

Rec and Park general manager Phil Ginsburg said in a statement, “On behalf of the San Francisco Recreation and Park Department, I would like to express my deepest condolences to the family and friends of the victim.”

Ginsburg said his department “is cooperating fully with the San Francisco Police Department as they investigate this accident.”

Anyone who may have witnessed the incident or has surveillance footage of the area is asked to call the Police Department’s Ingleside station at (415) 404-4000.