Outside Lands: Our Must-See Music And Comedy Picks 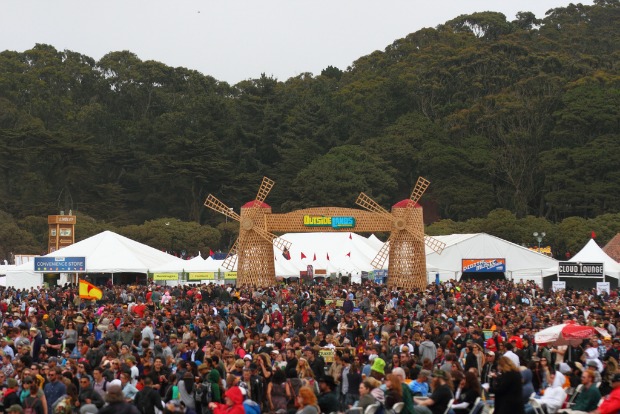 With only a few days to go ’till Outside Lands, you’re probably still stressing on who to see and what all to do once you hit Golden Gate Park. As usual, the Appeal’s got you covered! Below is our list of must-see acts for all three days. Be on the lookout for our live coverage once the festival hits, including live tweets from SFAppealOL.

Friday:
twenty one pilots: Chances are you’ve heard twenty one pilots on the radio or in some rap-happy mix. The band’s getting a ton of play, but to truly get the full twenty one pilots experience, you’ve got to experience them in all their live glory. Luchadore masks, snare drum battles, and backflips are par for the course. They may be gimmicks but twenty one pilots have yet to wear out their welcome as they continue to redefine their style and sound.

D’Angelo: D’Angelo is seriously back (that said, he pulled out of several shows he had booked this week, so maybe not…) and better than ever. We may still be waiting on a real follow-up to Voodoo, but the neo-soul superstar has been regaling audiences since last year’s Essence Fest performance and Bonnaroo Superjam, his first stateside appearances in over a decade. Get him while you can (if you can). Update: Sure enough, he’s pulled out, and has been replaced by Chic.

Paul McCartney: If Paul McCartney’s epic 3 ½ hour, thirty-eight song Bonnaroo performance is any indication of his Outside Lands show, Macca will come overstuffed with material and unconcerned by time constraints. You won’t even notice 10pm blowing by as he takes you on a musical journey throughout his extensive discography and projects.

Saturday:
Jurassic 5: Once 5 o’clock hits, head to the Lands End stage and be prepared to rock. All three Saturday recommendations run one after the other. Kicking things off are hip hop legends Jurassic 5, who spent the last six years apart. Their future is still semi-uncertain; as with D’Angelo, this may be your rare opportunity to hear their classics.

Yeah Yeah Yeahs: You think Yeah Yeah Yeahs go hard on their albums? What ’till you’ve seen the raw power and energy put forth in their live performances. As with their output, each show is its own unique beast, adding and subtracting antics and aesthetics like a well-oiled machine. Frontwoman Karen O is a serious force to be reckoned with, leading Brian Chase and Nick Zinner on a gritty punk caravan where the journey is the destination.

Nine Inch Nails: Choice cuts from NIN’s upcoming LP Hesitation Marks have been popping up left and right. Anticipation is high for the Trent Reznor-led outfit, whose festival dates will see a completely different stage configuration compared to their arena shows. Melding the high-minded aesthetics of How To Destroy Angels with down and dirty NIN classics should make for one hell of a show for your eyes and ears.

Hall & Oates: As badly as I wanted this recommendation to just be a trite write-up using various titles of the iconic duo’s songs, I can’t go for that (no can do). Hall & Oates are melodic icons whose sweet harmonies and lyrics helped shape the face of musical acts from across the spectrum, from electropop to coffeehouse singer-songwriters. After decades of success, countless albums, and even more ubiquitous singles, they haven’t missed a beat.

Matt & Kim: Matt and Kim are, ahem, raunchy as fuck live. Their verbose demands that fans get naked and/or get to baby-making is just one component of their high-energy show that takes Kim Schifino across the stage and straight to the fans. Interactive, insane. Come ready to party.

Top 3 Comedy:
Friday – Jeffrey Ross Roasts SF and boy is he ready to tear the city a new one. Says Ross, “Oh well, I’m working on my Asiana Airlines jokes. That will be at least five to ten minutes of my show for sure because I already have a lot of airline material. But when you add a crash landing to it, you know hilarity ensues. And I think there’s nothing that’s off-limits to be honest with you… There’s no holds barred on my show. It’s not for kids. If you have thin skin, don’t come to that Barbary.”

Saturday – The Julie Klausner Cabaret Situation is set to not only bring the funny, but offer a bit of variety as unique as Klausner herself. Easily known as one of the most hilarious people on twitter, Klausner also runs the pop culture gamut with her How Was Your Week? podcast. Her output and consistency is what makes her a must-see both online and at the Barbary.

…And another thing:
Bonnaroo regulars know just how exciting and unpredictable a Superjam can be. Sunday night’s show at the Independent marks the first (and hopefully not the last) for Outside Lands.

Says John Oates, on the Superjams: “It just takes you out of your comfort zone. You know, I get to play with all these different players who don’t necessarily approach music always the same way that I might. So I learn a lot. I get turned on to different players and get the chance to play in different styles, which I love. And it makes my playing better. So, the whole thing is just; it works together really well.”

Go see Ivan Neville’s Dumpstaphunk, John Cleary, Oates, and more special guests than you can shake a stick at. 100% of ticket sales will go directly to SF Rec and Park.