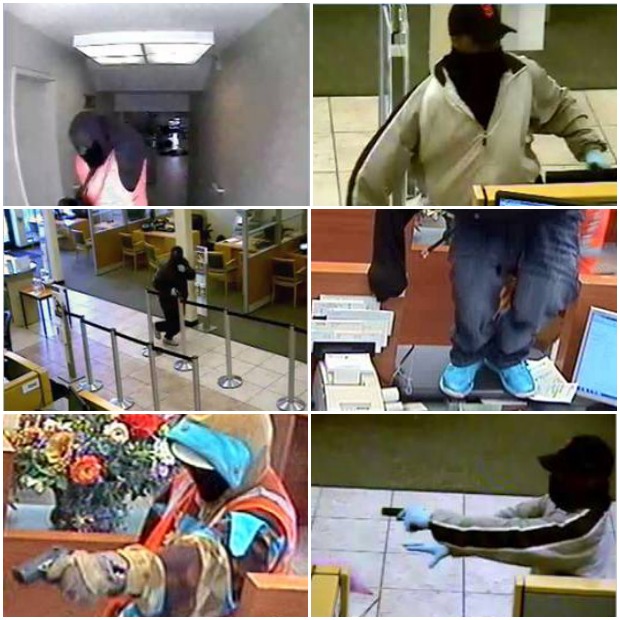 The FBI and San Francisco police released more information today about two separate series of bank robberies recently in the city and along the Peninsula.

A group believed to be responsible for at least five robberies in San Francisco and Millbrae since April has been dubbed the “High Jumper” bandits because they frequently jump over teller counters to grab cash from bank drawers, FBI Special Agent in Charge David Johnson said.

The most recent of the robberies occurred last Thursday at a First Republic Bank at 6001 Geary Blvd. in the city’s Richmond District, according to the FBI.

The same suspects are believed to be responsible for the robberies of a Bank of America at 1007 Taraval St. in San Francisco on June 6, two bank robberies in San Francisco and Millbrae on June 3 and another on April 19 at a Wells Fargo at 725 Irving St., according to the FBI.

The suspects are described as three black men between 20 and 35 years old, two of whom are between 6 feet and 6 feet 2 inches tall while the other is between 5 feet 8 inches and 5 feet 10 inches tall. During the robberies, they wear clothing to mask their faces, FBI officials said.

The federal agency is also looking for a suspect in at least two other robberies in San Francisco since June.

The suspect is being referred to as the “Up Close” bandit because of the high-quality resolution of the surveillance photos taken of him during the robberies, which occurred on June 17 at a Citibank at 2198 Chestnut St. and on July 1 at a Bank of America at 2310 Fillmore St., FBI officials said.

During the robberies, a lone suspect entered the bank, simulated having a gun and demanded money from a teller. He is described as being a black man between the ages of 30 and 45 who is between 5 feet 10 and 6 feet 2 inches tall and weighing between 170 to 200 pounds, according to the FBI.

He was wearing a black hooded sweatshirt, black shoes and tan pants in one robbery and a similar sweatshirt and shoes along with black pants with lighter-colored patches on them during the other robbery. The suspect had a neatly trimmed moustache and goatee, authorities said.

Johnson from the FBI said the robberies are part of a recent uptick in bank heists in the agency’s San Francisco division, which extends from Monterey Bay north toward the Oregon border.

There have been about 160 takeover bank robberies in the area since October 2012, he said.

Anyone with information about any of the various suspects is encouraged to call the FBI’s San Francisco office at (415) 553-7400. Tips can also be submitted online at tips.fbi.gov.