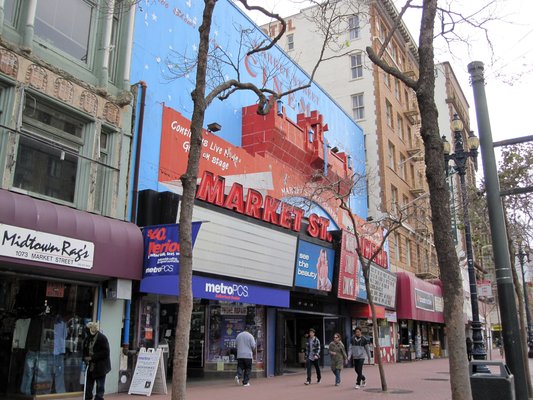 “I’ve been surprised over the lack of positive publicity about the closing of the Market Street Cinema at 1077 Market. Behind its horrific blue exterior false frontage is a true historic theater that preservationists should be raising money to acquire. The Market Street Cinema was perhaps the worst blight in all of Mid-Market, and its closure creates a golden opportunity to restore an historic theater to contemporary arts or theater use.” [Shaw/BeyondChron]

Sure, there’s Twitter, a new CVS, and that repaving, but the Yelp 2.5 starred (“What we found out was, as long as you drop a lot of cash, ANYTHING goes in this place. ANYTHING.“) Market Street Cinema remains empty and decrepit. Then there’s “the multi-year vacancy at the former Hollywood Billiards site.”

Come on, given the vitriol heaped on Sean Parker and his fairy wedding, surely there’s some other tech zillionaire interested in showing him up by bankrolling a movie or pool venue we can all enjoy?

Then again, perhaps the theater’s remained empty because it’s haunted. An eagle eyed tipster points me to this February 2013 report that alleges that the Cinema was shuttered because “it became so haunted that the dancers and staff refused to continue working there unless something was done about it.”

Appeal movies writer Rain Jokinen also notes that the Theater even appeared on Ghost Adventures, where they alleged that it is “home to a dark entity that stalks women and hurts men.”

Hmm, maybe Shaw shouldn’t be that surprised at “the lack of positive publicity” over the Cinema’s closing, given it appears that Dark Forces reside within. So let’s revise that earlier paragraph to read “some Ghostbustin’ tech zillionaire,” shall we?