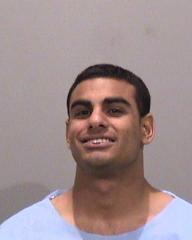 A 16-year-old girl was allegedly kidnapped by a man who had broken into her car and hid in an attempt to sexually assault her after she went to a Fremont grocery store Monday morning, according to police.

The victim parked her car to go to the Lucky Supermarket at the Brookvale Shopping Center, located in the 3500 block of Fremont Boulevard, just before 7 a.m.

While she was in the store, allegedly Aron Kumar Roy (pictured right), a 23-year-old Fremont man, got into her car and hid in the backseat, police said.

When the victim returned and started driving off, Roy allegedly produced a knife and began giving the girl instructions to drive to a remote location near Isherwood Way and Chaplin Drive, police said.

It appears he was attempting to rape the victim, according to police.

The victim parked the car and was able to escape and run to a home where a resident called the police.

The resident also activated the panic button as part of her home’s alarm system, police said.

Officers responded to the area and found the victim’s vehicle sitting on Isherwood Way and identified the suspect as Roy.

He was found at his workplace in the 4800 block of Dublin Boulevard in Dublin around 6 p.m. that night, police said.

Roy was booked into the Fremont Jail on six charges, including kidnapping, kidnapping with the intent to commit rape, assault with a deadly weapon, and false imprisonment.

He is to be arraigned today at the Fremont Hall of Justice, according to jail records.