Smokin’ Fast: Staying Committed To Training Even After A Disappointment 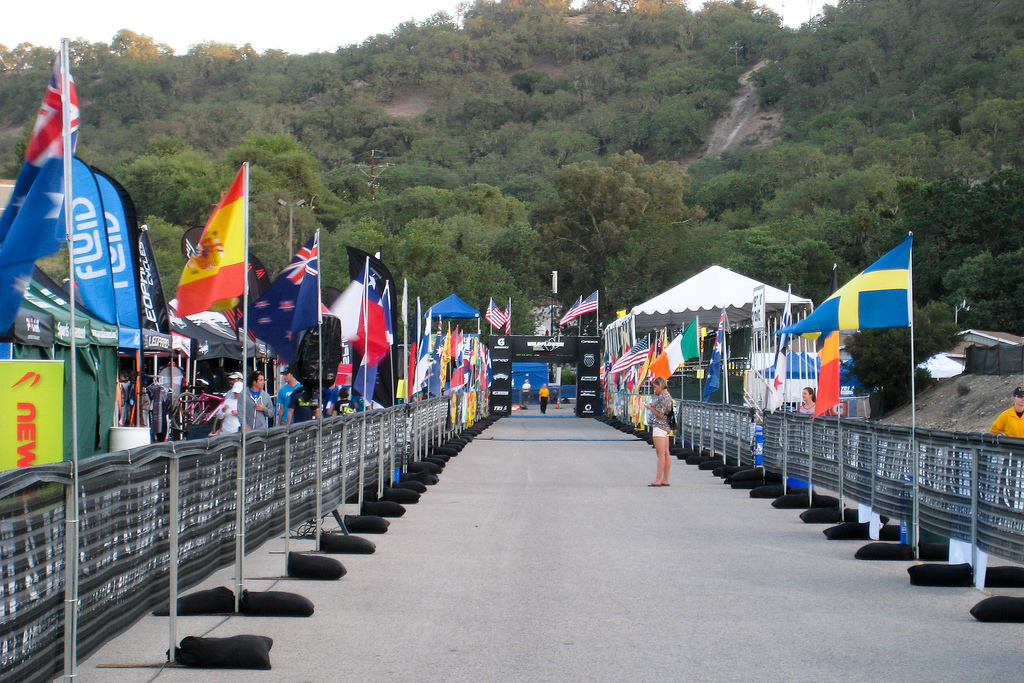 Sunday marked the 31st annual Wildflower, the “Woodstock of Triathlons.” One of the biggest such events in the world, it’s renowned for its rugged, beautiful course around Lake San Antonio and a fun festival atmosphere complete with thousands of possibly inebriated, definitely scantily-clad Cal Poly students cheering runners across the finish line. Thousands compete in the long course, Olympic, and sprint races over the weekend, a large proportion of whom hail from the Bay Area.

I completed the race last year for my first event at that distance (a 1.2 mile open water swim, 56 mile bike ride and 13.1 mile half marathon run), and even with more than a year of training and six shorter races under my belt, was still nauseous at the start whenever I thought of the distances and the relentless heat. But I kept in mind what a privilege it was to compete at all, enjoyed the scenery, stuck to my plan, had a great time and finished strong!

I had hoped to compete again this year, but was sidelined from swim training all winter recovering from a broken shoulder. So I was rooting for my friend Julia Quirk, who just started training for triathlons last November, and in March finished her first event — the Olympic distance (1.5k, 40k, 10k) Lavaman Waikoloa — where she did really well! But Wildflower isn’t just a longer course, it’s also really hilly for a triathlon and always hot, which is hard to acclimate to ahead of time in the Bay Area. Between the dry winter and hot spring, the lake was warm enough that for an official time under USA Triathlon rules, wetsuits weren’t allowed.

Quirk is one of the ubiquitous purple people from the Northern California chapter of Team in Training, an endurance sports training program founded by Bruce Cleland in 1988 that raises money for the Leukemia and Lymphoma Society. So I knew she was reasonably well prepared despite some challenges and enjoyed quality coaching and team support. I was confident she’d do well, and excited to check out her progress live.

I texted her after she’d left the swim-to-bike transition to cheer her on. “44:52 on the swim – you’re already faster than me! :)”

I was surprised to get a reply just half an hour later. “Yeahhhhhhh. I didn’t finish the race. I crashed my bike.”

My heart broke a little.

When you live vicariously, you tend to project your own hopes and fears on other people. And one of my biggest fears when I started training was that at the first injury or disappointment I’d waiver in my commitment. All the healthy habits I’d managed to develop and progress I’d achieved through my fitness regimen would fall away in a month of chugging Coca-Cola, ordering cheese pizza and playing Civilization IV. Because the danger in pinning your sense of self-worth on achieving some goal — something which is, let’s be honest, encouraged through fitness marketing — is that if you fall short, it can be hard not to let the experience emotionally validate any self-limiting thoughts and storylines you’ve been cultivating.

Thankfully, Quirk is made of tougher stuff. You can read all the details in her gut-wrenching race report, but to summarize: The bike crash only exacerbated her minor but persistent calf injury, nearly disabled her bike, and left her bleeding into her grip tape. But with help from bystanders and crew, she persisted, and even helped other struggling athletes along the way. And when she finally reached the end of the bike stage, wobbling along on tacos for wheels, race officials pulled her chip, ending her day. It was past the cutoff time.

Every finisher gets a medal, but what do you get if you Did Not Finish? Just hugs and a bunch of hard lessons in perseverance. “On the drive down, I had a vision of doing the half-marathon crying,” she told me over the phone in an interview a day after the race.

She had concerns about her left leg, but “kept in mind everything everyone who knew what they were doing told me,” like her cycling coach who assured her that race adrenaline would carry her through discomfort, which held true even though her calf and knee were bothering her leaving the swim.

“I would have finished without the crash,” which took the leg from discomfort to pain and left her pedaling primarily with the good leg after the accident. Lesson learned? “Race adrenaline does not overcome injuries.”

The rule I follow is that if it affects your form, it’s time to call it a day. And while Quirk was ready to crawl the run course if she’d had to (which, it turns it out, is officially not allowed), she is now wisely awaiting for word from her doctor before she resumes bike or run training. And she already has swim drills she can practice with a bum knee so she can maintain some momentum in the pool — and practicing with a float buoy might even help her distance swimming form in the long run.

It’s taking that kind of long view that can help get you through such frustrations. For instance, Quirk became known as the “Flat tire queen” for all the burst tubes she experienced on training rides. Even the one ride we took together? Yup. But? “Because I’d gotten so many flat tires, I can change a tire really fast!” And with a rare opportunity to test a unique coaching tip, now she’s taught me by example that you really can temporarily patch a hole in a tire with a protein bar wrapper.

She also learned that while triathlon is an individual sport, the races are really a huge team effort, with everyone eager to help each other. “Well, not everyone, because some people are douches.” Like an angry gentleman with more minor injuries who’d pretty much given up after a crash, having missed his goal time and resigned himself to waiting for the sag wagon. “I knew that I was more hurt than he was,” and admitted that in her own mind her disappointment had turned her thoughts pretty dark, but kept going by holding on to the little victories–like MacGyvering tires–instead of the big disappointment.

One of the criticisms leveled at charity training organizations is that the community commitment means “you might feel pressured to keep pushing with training when you shouldn’t,” though goodness knows one doesn’t need external sources for that kind of pressure. Let’s face it, folks who go in for amateur competition are generally some pretty goal-oriented people. I told Julia straight up that in retrospect, having biked on a knee tweaked from an accident and paid for it myself, that maybe she did take it a little too far.

But maybe I’m just projecting again. How else are you supposed to learn your limits? In the moment, getting my chip pulled, I imagine it would feel like getting cut off by the bartender — “Go home, West, you’re drunk.” I

t’s always a tough call to make, you usually have to make it under intense stress, and everyone, even the likes of the World’s Toughest Mudder, have to make it for themselves in the moment.

Still, there’s a lot of room between being that guy who gives up after the slightest setback and the woman who begs to run a half-marathon on a bad leg, and a lot of friends to be made in the middle of the pack or by the side of the road. I shared with Julia that at my most recent race, though I’d finished better than last year, I’d been beaten handily by two guys a over decade older than me. While their example certainly offers something to aspire to, it also diminishes my hopes I’d meet my goal for the next race against such competition.

“You don’t know what’s going to happen on race day,” Julia reassured me. It’s true! I could end up broken on the side of hill, watering a bed of wildflowers with my tears. And it would be a privilege.