The following street closures will be required from 2 p.m., Friday to 10 p.m., Saturday:

No Muni service will be affected.

The 108 Treasure Island Muni Route will be affected. 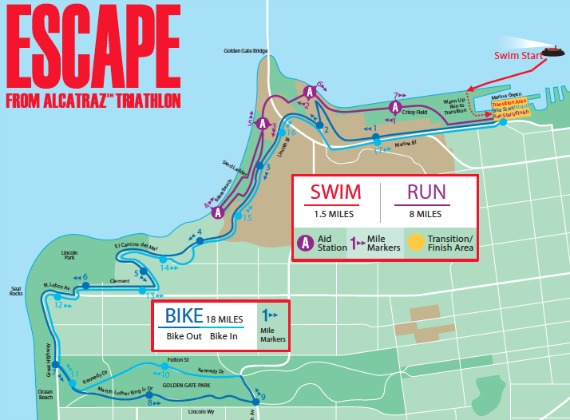 The bike riders will leave Marina Green at approximately 8 a.m. and participants will finish the bike course by 10:30 a.m.

The route of the bicycle portion of the triathlon will be as follows: from Marina Green through Crissy Field and the Presidio to Legion of Honor Drive, right on Clement to the Great Highway, through Golden Gate Park via Martin Luther King, Jr. Drive to Transverse, and return via John F. Kennedy Drive on the same route to Marina Green.

The entire bike route will be heavily monitored by SFPD, SFMTA Parking Control Officers and race officials. Traffic will be slow in the affected areas and motorists will be delayed as the race passes.

The route of the running portion of the triathlon will be as follows: from Marina Green into The Presidio to Fort Point, south on the Coast Trail to Baker Beach and back to the Marina.

The following Muni routes will be affected by the triathlon:

Muni service will not be affected.