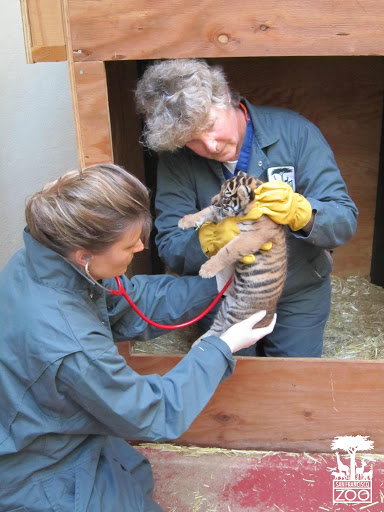 Here SF Zoo veterinary staff complete a quick exam (less than 5 minutes!) so that mom and cub can resume their bonding. The cub is in excellent health!: SF Zoo

A Sumatran tiger cub born last month at the San Francisco Zoo has had its first medical exam and officials now know she is a girl. However, you’ll have to wait to learn what to call her until at least May 11, when her naming rights will be determined at a big-ticket fundraiser.

The exam, which included weighing and measurement, was conducted very quickly, in less than five minutes, to avoid interrupting the cub’s bond with her mother, Leanne.

The cub, born Feb. 10, is in excellent health, according to zoo spokeswoman Abbie Tuller. The cub’s 8-week health exam will take place on or around April 10.

“Since the exam, we’ve been able to conduct brief socialization sessions with the cub to get her used to her keepers,” said Corinne MacDonald, curator of carnivores and primates.

“As we learned with Leanne’s last litter, she is an extremely attentive mother and allows us in the same space with the cub as long as she is able to watch from an adjoining enclosure.”

Leanne has started bringing the cub out of the next box a few times a day while the keepers watch.

The lion house was closed after the cub’s birth, but the zoo now plans to begin opening the Lion House for extremely limited viewing hours, on weekends from 1-3 p.m.

Visitors to the Lion House are asked to follow the instructions of zoo staff and security, remain behind barriers and avoid making noises to attempt to wake or disturb Leanne and the cub. The zoo does not guarantee Leanne and the cub will be on view during those hours, but will provide a video display if they are in the nest box.

According to the Chron, the baby tiger is “still dubbed just ‘The Cub’ by her keepers.”

However, her naming rights will be up for grabs at ZooFest, the Zoo’s annual fundraiser, where attendees will also be celebrating the births of a yellow-backed duiker, a rednecked wallaby, and a greater kudu.

Attendees at Zoofest are encouraged to don “construction and/or animal inspired evening attire.” Tickets for the May 11 event begin at $500.