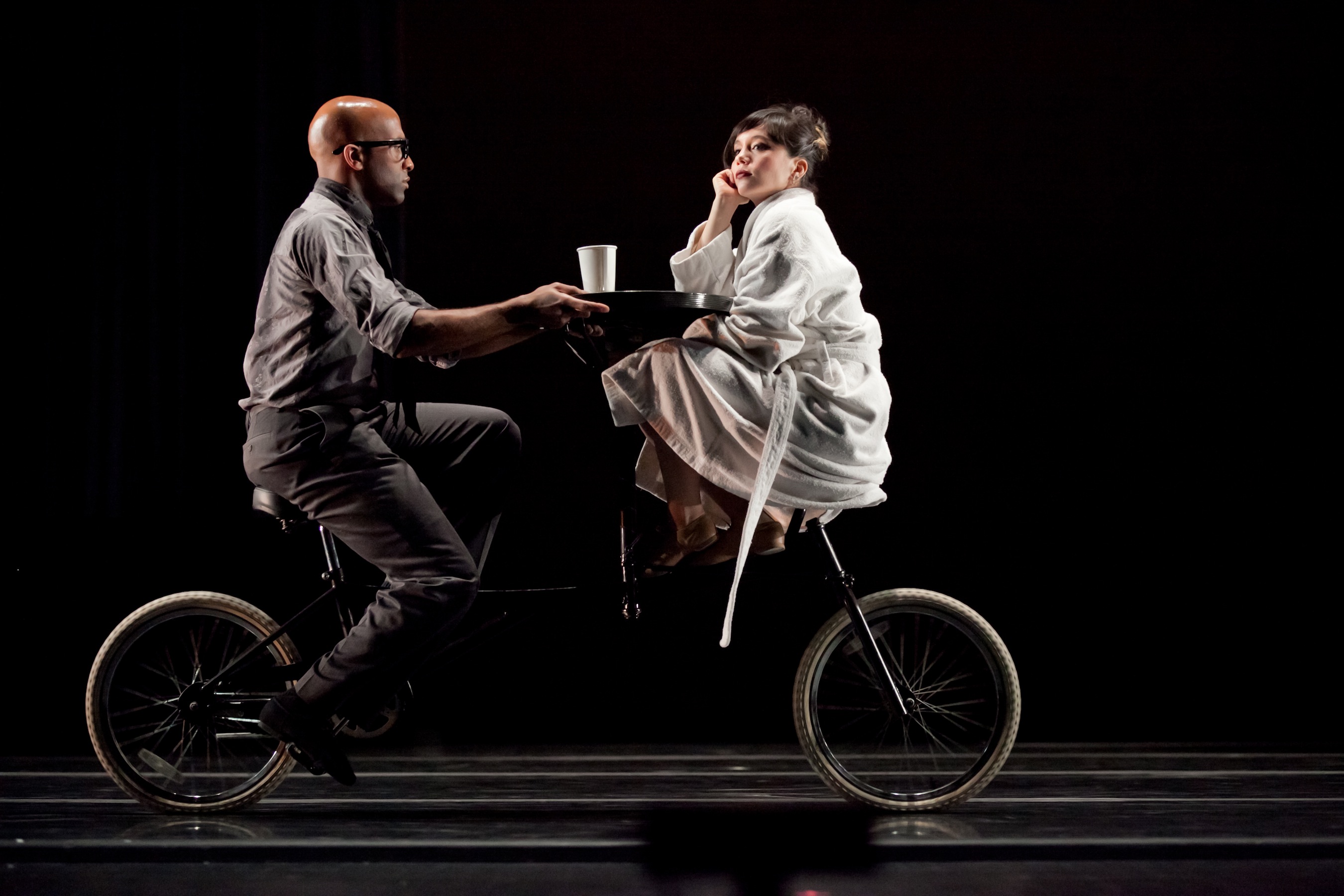 Max Chen created custom bicycle-art-slash-sets-slash-props for ODC/Dance’s KT Nelson and her series of transit-focused dances. As Nelson’s second piece in the series, “Transit II: Next Stop”, is set to debut this weekend on ODC’s March program, I sat down with Chen to learn about his bike creations and how his skills found their way to the stage.

Becca Klarin: How did you begin to work with KT?

Max Chen: I think KT met a friend of mine at a party, and they began talking about what KT does. She wanted to incorporate bicycles into her next piece, and my friend said that we should meet.

Max is the guy?

Yeah! I had gone to Maker Faire a couple of times and I had shown my bikes. I’ve been tinkering with stuff for awhile.

Was there any specific process in how you worked with KT?

We met at first, and this was maybe a year and a half before “Transit” [the first piece in the series: it debuted in 2012] premiered. And I was like, “A year and a half? I can’t even think that far ahead!” She was still applying for grants and I was like, “Tell me when it gets closer!” But her theme was city life, how bikes give you a sense of freedom and a sense of motion: the motion of city life. So there was a lot of thematic things that she mentioned, and I just started bouncing sketches off her.

One thing that dead-ended was that she wanted something appropriate for a stage size, and we talked about a bike that was inherently slow. Or a bike that was limited in some way. So I built this bike that had a speed governor on it so that the more you pedaled, the harder it squeezes its own breaks.

That sounds fairly cruel to the dancer-rider!

Yeah. Well… It is! It’s like an exercise machine in a way. But it turned out that the bike wasn’t quite what she wanted. It looked neat, but it didn’t quite fit in with the theme…. So we started talking more about the scenes and more about how bikes would fit in to the theme. Like should we have a park bench that’s a bike… So there’s a bench that you can ride away… It’s a bike but it’s not. But [KT] made it clear that she didn’t want circus bikes. Or a weird bike just to be weird. It’s not like BMX riders doing tricks on a bike because that’s a kind of dancing on bikes. And she didn’t want 10 different people piling on a tricycle.

Had you ever seen ODC perform before?

I had seen ODC perform, but before “Transit.” It was a long time ago. But the first time I went to their Mission [district] studio, I was really impressed.

How did you get into metal working and taking bikes apart and forming new bikes?

I took one metal working class in college, but I didn’t really do anything with it. By trade, I’m a mechanical engineer. I work with industrial designers on products.After college, I did that for a few years, and I felt like in a way, I was only producing more landfill.

So I was looking for something that had more permanence. Metal working seemed pretty permanent to me! I apprenticed as a blacksmith for a year and then got my own equipment. The bike angle, though, was already kind of natural to me. I had never owned a car, and I bike everywhere. And the availability–I’ve also worked at used bike shops that do youth programs, and they have a pile of bikes, like at the Crucible or where I used to work awhile back, the Bike Hut along the Embarcadero.

At the Bike Hut, they were always receptive to me taking some frames that were sitting back there. There was the availability of free material, and I like the kinetic aspect of all of the components.

Do you work on projects according to your heart’s desire? or do you work more via commission

Yeah, recently, it’s been more requests. I basically ran out of space to keep anything that I make. I just helped someone make a bike trailer for their bread-making workshops. She wanted room enough for all of her stuff, but it also tills up into a demonstration kiosk.

You invited me to accompany you on a bike ride to your shop down in the Bayview. I must say, I was flattered! But I haven’t ridden a bike since I pulled a Superman (aka flew right over the handlebars) back in the 3rd grade. If people are interested in overcoming their bike fears (you know, like me!) or learning how to bike in the city, what are your suggestions?

The easiest way is to find a friend who likes to bike and have them ride with you. Another way–if you have a car–is to drive to someplace really remote and just practice.

The SF Bicycle Coalition offers beginner biking lessons over near Kezar and Golden Gate Park. Maybe I should just do it and rent a bike for a day. If I make it 20 feet, I’d call it a success.

Yeah, SFBC is great. They do youth workshops and adult workshops. But it may be more useful to have a friend stand there with you. It might be more motivating, too. And of course, it also helps to have a bike that works well!

I saw on your website that you created a tank for your little boy!

Are you getting him on a very little bike yet?

No, he’s not ready yet. But I have a front carrier on my bike, and the wife is in the back [on the cargo attachment that he constructed]. If you can imagine, this whole family is just riding down the street on one bike.

Do you have any projects coming up?

We just moved back to the city, so I have some house projects to do. But I belong to this art collective–Five Ton Crane–in Oakland. And they usually work on some pretty cool, large projects. Like for Burning Man.

So you go to Burning Man? What’s that like?

I’ve gone maybe four times. The first time, I thought this was the coolest, awesomest thing in the world. And then I got into these big installation projects where we’d have to get there a few weeks early and stay late. And then I feel more connected to the purpose of it.

So you didn’t bike all the way there and back right?

No! We rent a truck or something… but I’d go there a lot for the art and the feeling of community and the “no money” thing. But I feel like a lot of that [art] has been a part of the Bay Area for awhile; and some of the cooler art has been going up around the city like at Hayes Green and the rocketship at the Embarcadero.That’s one of the Five Ton Crane projects.

To me, Burning Man at the beginning was that I changed myself, and then once I did that, I didn’t need to go back.