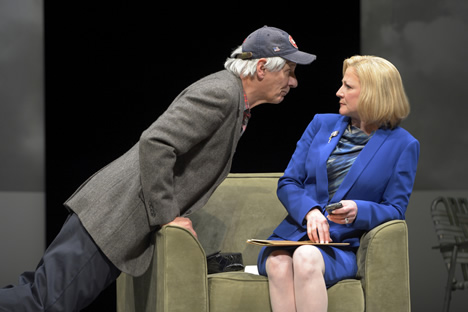 Dead Metaphor, George F. Walker’s political “black comedy” now running at American Conservatory Theater, begins at a job placement agency for veterans, with what unfortunately turns out to be the play’s funniest scene. Dean Trusk (George Hamp), an elite sniper recently returned from the war in Afghanistan, tells his counselor, Oliver Denny (Anthony Fusco), that he thinks he’d make a good copyrighter of greeting cards – the kind that start with a seemingly earnest statement on the cover but conclude with a sarcastic turn inside. Dead Metaphor amounts to about as much: good for a few laughs, but destined for the waste bin once the guests leave.

After the fantastic opening exchange, which succeeds by treating its comically absurd subject matter with pause-loaded reserve, the characters move on to still more uneasy terrain. Dean’s fiancée, Jenny (Rebekah Brockman), is pregnant and his father, Hank (Tom Bloom), is losing his memory and inhibitions as a result of what turns out to be a brain tumor, resulting in his penchant for crass humor and left-wing militancy to emerge no holds barred. Meanwhile, we learn that Oliver’s wife, Helen (René Augesen), is a Machiavellian right-wing politician with her pink heel dug firmly into her lame husband’s liberal organ.

This “loony cunt,” as Hank describes her, happens to be seeking a veteran on her staff for appearances’ sake. So, sure enough, she is to become the employer of the potty-mouthed liberal’s wayward son. Things go sour quickly, though, when Hank seizes upon an act of bribery that Dean witnesses on the job, igniting a war of blackmail that soon escalates to outright war.

It turns out that Walker’s characters, with perhaps the exception of Hank’s completely one-dimensional wife, Frannie (Sharon Lockwood), can hardly claim a scrap of goodness between them. Each falls somewhere on the spectrum of Hobbesian self-interest or casual nihilism, making for a series of humorous interactions that play out in a somewhat Seinfeld-esque flavor of “black comedy.” Indeed, Christopher Barreca’s set design of rotating concentric circles, which wheel characters in and out of sight for scene changes, gives the play a distinctly sitcom-like feel.

Unfortunately, when civility makes its exit (about the time that Hank bellows the phrase “loony cunt” in one of his first lines), so does the restraint that made the opening sequence, and in fact the Seinfeld series, so intelligent and funny. Later outbursts by Hank, like “I’ll kill you and fuck your corpse” (still not his crassest line) make for the play’s most riotous moments.

Beyond finding laughs in dementia, the play’s humor consists of equally lazy, softball digs at the political arena. Throughout this lowbrow comedy, whose redeeming attribute is a host of good performances more or less across the board, the playwright never develops anything close to a forceful, coherent statement about the rather serious subjects that he broaches – post-combat psychology, aging, political theater.

As he escalates the plot to more and more ridiculous extremes throughout the second act, Dead Metaphor only sets itself up to flop from a greater height. With a highly unsatisfying “ambiguous” ending, flop it does.