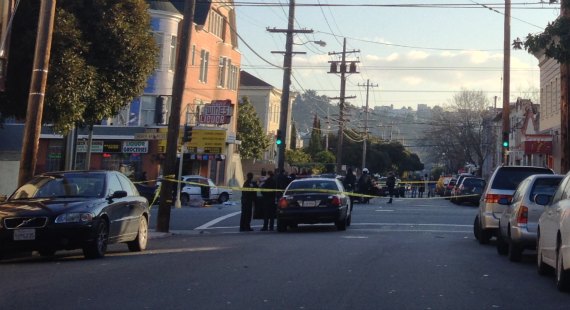 Two people were killed and a third was critically injured after a suspect allegedly fled a traffic stop in San Francisco’s Mission District.

The crash occurred at about 8:06 a.m., according to the fire department.

According to Appeal contributor Jackson West (those are his photos above and below), the black car on the right was being chased by SFPD previous to the crash.

“The white car was a bystander as I understand,” West reports.

SFPD spokesperson Officer Carlos Manfredi said by email that “at approximately 7:45AM officers received information of shots fired from a vehicle around the Valencia Gardens located near 14th/Guerrero.”

“Minutes after officers had responded in the area, a possible suspect vehicle was seen at 21st street and Mission. Officers conducted a traffic stop, and upon approaching the vehicle the suspected felony vehicle drove off at a high rate of speed.”

Manifredi says that the suspect vehicle began driving east on 21st from Mission, and broadsided a passenger vehicle with two occupants, thrusting it against a convenience store located on the corner of 21st Street and South Van Ness.

“A pedestrian who happened to have been entering the store was struck by the vehicle,” Manifredi said.

“The pedestrian and passenger of the victim vehicle were pronounced dead at the scene and the victim driving was transported to San Francisco General Hospital where he is believed to have suffered life threatening injuries. All three victims were in there mid 20’s.”

“The suspect was taken into custody and a handgun was recovered inside the vehicle.”

“The suspect is being treated at San Francisco General Hospital and will be charged for the death of the two victims and possession of a firearm,” Manfredi said.