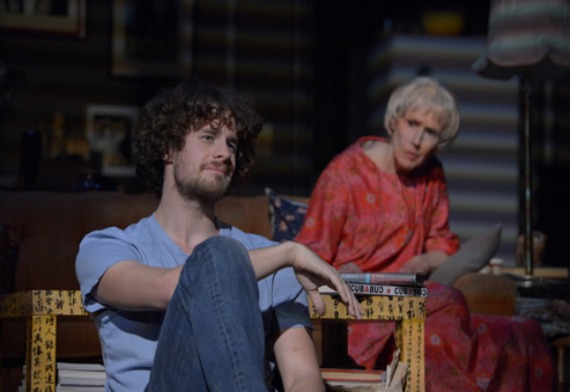 Amy Herzog’s 4,000 Miles begins with shaggy, smelly, twenty-one-year-old Leo (Reggie Gowland) showing up one night at the Manhattan apartment of his ninety-one-year-old Grandma Vera (Susan Blommaert) – naturally, to her great concern. He’s lugging about fifty pounds of gear from a very ill-fated cross-country cycling trip he has just completed, but Herzog has saddled him with something else: a role in a cross-generational family bonding narrative that most audience members will have encountered many times before.

The formula is well-worn: rebellious adolescent and wizened elder clash until an unexpected common ground emerges – probably some surprising and relatable series of episodes from the elder’s youth, exhumed via either snooping or storytelling – and brings them to bond. It is generally the nuclear family that wins in the end, as the young person returns home with a new regard for familial relations.

4,000 Miles adheres to this structure almost to a T, so earns few points for originality. However, it does merit the praise it has been receiving by producing a set of consistently compelling characters.

Leo embodies a millennial, hippie-inflected attitude characterized by an enthusiasm for cherry-picked political/lifestyle choices (locally grown food, polyamory, etc.) paired with a general lack of ambition. As the play progresses, Leo’s outlook reveals itself to be, at bottom, a means of sloughing off personal responsibility – for the demise of his relationship with ex-girlfriend Bec (Julia Lawler), for a transgression regarding his adopted sister, for the general effect of his going AWOL on a 4,000 mile cycling trip. We also learn that he has recently suffered a horrific loss, so we cut him slack.

Vera, in contrast, embodies a distinctly twentieth century MO: steadfast devotion to a single, totalizing ideology (Marxism), the justification for which she is woefully unable to articulate (that was her late husband’s job; as wife, her political duties extended little farther than administrating charitable donations). All the same, she is tough, wise and humorously unsentimental. With age, however, she has begun to have trouble “finding the words” for what she wishes to say – something that dismays her greatly. As for loss, at her age it is a regular fact of life.

When Vera can’t find her words, Leo is quick to supply his – a dynamic that accounts for both the compatibility and the friction in their relationship. Thank god, Leo and Vera’s rapport is not of the 7th Heaven variety; they bark, banter and even get stoned with one another. Much of the time it is laugh-out-loud funny, with the bulk of the zingers coming from the endearingly snide old lady.

The two young female characters in the play, Rebecca and Amanda (Camille Mana), a Chinese-American art student with whom Leo botches an intended hook-up, supply some of the more colorful and emotionally trying scenes. Each delivers the clueless central character a deserved rejection while Vera, for her part, manages to scare the shit out of them both.

In the end, 4,000 Miles is a very simple play: 1 ½ hours, one living room, largely just two characters and a culturally pre-set narrative template that ensures a primed audience from the get-go. To be sure, Herzog executes exceptionally well within these parameters; it is hard to point to any one element of this play and call it a failure.

At the same time, for this very reason it is hard for me to get excited about the work. I’ve seen versions of this story in the past and no doubt will see many more iterations in the future. I can’t imagine that, ten or even five years down the road, something as safe as 4,000 Miles will really stand out from the rest.