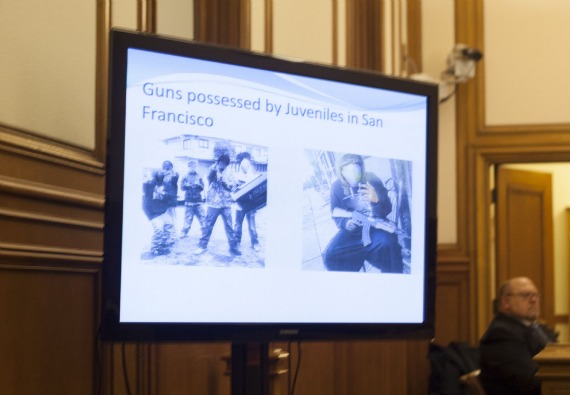 City Hall’s room 408 was packed Wednesday night by a crowd eager to voice their opinion on an attempt by the Juvenile Probation Department to allow their officers to carry firearms.

A smaller contingent, representatives of Service Employees International Local 1021, which represents juvenile probation counselors, attended to voice concerns over workplace safety for juvenile counselors- an issue overshadowed by other concerns now and before.

Two things prompted the JPD to bring workplace safety concerns to the commission, according to Juvenile Probation Department Chief Probation Officer William Siffermann. First, the city’s recent adoption of the policing strategy known as Interrupt, Predict, and Organize, or IPO.

Siffermann said that compliance checks are done randomly to determine if paroled youth are following their conditions of parole, curfew, and non-possession of weapons.

“The officers were traveling from one stop to another, encountered two people, one adult and one youth [on parole].”

According to news reports, one of the officers attempted to talk to one of the two people, who ran from police with the officer in pursuit.

“The officers were approached by an adult in posession of assault weapon,” Siffermann said. “The police performed intervention and interference and were successful in disarming the individual with the assault weapon.”

According to an SFPD press release, “The suspect was struck by gun fire and was transported to San Francisco General Hospital with non-life threatening injuries.”

Community outrage over the incident inspired a spontaneous demonstration in the Mission District, culminating in vandalism of the Mission SFPD station.

“I shudder to think what would happen if we weren’t in this together,” Chief Suhr told the commission, describing the incident as “life and death.”

In addition, at-risk situations are likely to occur more frequently because of recent changes in case processing and changes in state law, according to a presentation to the commission by Allen Nance, Assistant Chief Probation Officer.

According to a December Bay Citizen report, Siffermann has been “quietly attempting to build support” for his plan to arm officers, but that support apparently had its limits — at this week’s meeting, members of the community reacted to the presentation and the parole officer’s request to increase safety with outrage.

More than 15 people, many of who were youths offered similar arguments: parole officers with guns would damage the community and cause unnecessary violence.

One speaker went as far as calling the presentation the “politics of fear.”

Another, Katina Castillo, regional manager for community justice for youth at the Haywood Burns Institute claimed that the probation officers were a bunch of guys who, “… wished they were cops, but couldn’t be for one reason or another,” she told The Appeal.

She went on to explain that she, “will really work to pump the breaks on this issue,” because, “there is no model probation department that is armed.”

Castillo spoke to the Appeal as a citizen, and her views do not reflect her employer’s.

Siffermann dismissed the concerns, telling The Appeal the has always resisted that [being armed].”

But, also says that he refuses to allow people under his command to go into dangerous situations.

He says he was disappointed that many members of the community left before hearing what the counselors had to say.

“They may also be alarmed to learn that counselors wish to carry pepper spray and other items,” Siffermann told The Appeal.

By the time the probation counselors lined up to comment, most of the youth and outspoken opposition had left.

Although the situations probation counselors described appear to be less violent, workplace safety is still a serious concern. A report on workers compensation injuries from Louise B. Houston to Mario Guerrero obtained by The Appeal states that the total number of injuries reported on the job increased from 28 in 2009 to 34 in 2010, finally reaching a record high 58 last year.

At the time of writing, no financial data could be obtained from the city government.

There was also a significant amount of anecdotal evidence from the many union members attending the hearing.

“I am a product of no safety equipment,” juvenile counselor Joe Tanner told the commission during the public comment period. Tanner has a broken right arm in a sling.

More than 10 others went on record and explained how lacked items like working radios, handcuffs, pepper spray and training for basic safety and health like CPR.

Given the increase in injuries, the union believes that worker safety is an issue the Juvenile Probation Commission needs to immediately address, Alysabeth Alexander, SEIU’s political action committee chair said to The Appeal.

“We can either solve this or we can have this discussion with the rest of San Francisco,” she told the commission in apparent frustration.

Siffermann told The Appeal that “some of those issues [that] were brought to our attention were areas we already remedied, of late, within the last several weeks.”

Siffermann said that hearing the reports from local 1021 was “really helpful” and that his department will “… move ahead and correct the issues the issues regarding training, equipment, and construction of our electronic security systems.”

After the the public comments closed the hearing wrapped up with procedural formalities. Meanwhile, just outside in the hallway. Members of SEIU 1021 gathered in a circle and listened to their comrades. When the discussion was over, the union members remained in a circle and chanted, “We’ll be back! We’ll be back!” before dispersing. 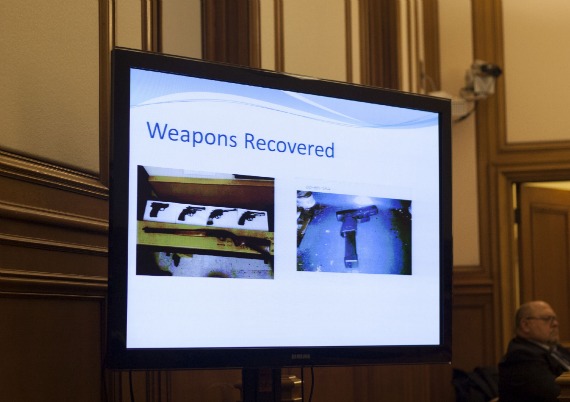