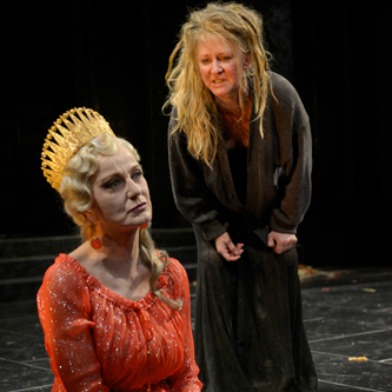 Greek tragedies are not the sort of play you come out of, quoting lines. The words all but recede into crashing tidal waves of bloodshed and emotion of the most basic varieties: lust, shame, hate, vengeance, etc. It is in many ways an actor’s and a director’s dream. However, it is decidedly not modern, and the spotty attendance at last Thursday’s performance of Elektra at A.C.T. may be a reflection of that.

Director Carey Perloff, exuding fascination with the genre in some Playbill remarks, calls attention to the fact that Sophocles wrote Elektra several thousand (!) years ago, back when Greece had only recently decided to become a democratic nation rather than a collection of warring tribes, and was very much still coming to terms with a notion of “justice” beyond good old fashioned, tit-for-tat vengeance.

Explicitly addressing these growing pains, Sophocles’ Elektra begins several years after the titular character’s mother, Clytemenstra (Caroline Lagerfelt), butchered her husband, the beloved king Agamemnon, out of vengeance. Vengeance for what? Among other things, he had killed her first husband and infant daughter and forced her to marry him, then sacrificed their own daughter to the gods as an act of military strategy.

While these reasons seem fair enough, Elektra (René Augesen) cannot forgive her mother (Elektra’s sister, Chrysothemis, played by Allegra Rose Edwards, has less trouble doing so – a point of contention). She does little apart from cry about it until brother Orestes (Nick Steen) returns home to swing the double-sided axe of vengeance once again, offing their reprehensible old lady.

Despite its age and cultural distance, we are still able to relate to the outrage of Elektra. It requires only a dash of modernization to keep spry; to keep from blurring into just a lot of melodramatic wailing, sword thrusting and waxing on “justice” like a petrified open sore.

A.C.T.’s production benefits from a smart translation by Timberlake Wertenbaker and modernizes rather boldly through a distinctly contemporary set (barbed wire and search lights – more like a modern political compound than a Grecian one), costume design (prepare for Elektra and Chrysothemis in sexy haute couture, Orestes in shades and muscle tee) and cello score by experimental composer David Lang.

However, there is a lot of wailing. So if, amid the oaths of vengeance and philosophical musings, you find yourself unduly preoccupied by Anthony Fusco’s character’s ridiculous cap, or even if you decide to skip this one altogether, you may be forgiven.

Elektra runs through November 18 at the American Conservatory Theater