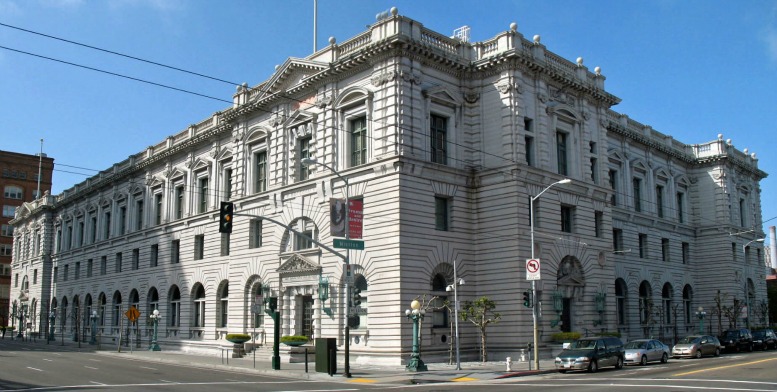 The 107-year-old courthouse of the 9th U.S. Circuit Court of Appeals in San Francisco–a building that survived two earthquakes and has been the scene of many courtroom dramas–has been declared a national historic landmark.

The landmark designation is reserved for buildings of exceptional historical value or quality and there are slightly fewer than 2,500 such sites nationwide.

The four-story courthouse was completed in 1905 in an ornate version of the neoclassical Beaux Arts style known as the American Renaissance style.

While its exterior is quiet gray granite, the interior is lavishly decorated with marble walls, porcelain-tiled floors, Venetian glass mosaics and carved marble, plaster and mahogany.

“The building expresses the wealth, optimism and pride of a nation proclaiming its new status as a great imperial power,” according to a federal architectural study carried out in 1994.

A year after it opened, the building was damaged in the great earthquake and fire of 1906, but was one of the few buildings in the eastern part of San Francisco to remain standing, and served as an emergency shelter and a symbol of continuing functioning of the federal government. It was repaired and reopened in 1910.

The building originally housed not only the 9th Circuit court, which hears appeals of federal cases in nine western states, but also the federal trial court for Northern California, a regional headquarters of the U.S. Postal Service and several other federal agencies.

Famous trials held in the courthouse in the first half of the 20th century include the treason trial of a World War II radio announcer known as “Tokyo Rose” and the perjury trial of Longshoremen’s Union leader Harry Bridges.

In 1917 and 1918, the courthouse saw the trial of eight Indian nationalists who were seeking independence for India and were charged with conspiring to form a military enterprise against the United Kingdom.

During a break on the last day of trial, one of the defendants shot and killed a co-defendant whom he suspected of embezzling nationalist funds. A bullet hole made by a ricocheting bullet can still be seen in the courtroom. The shooter was killed by a U.S. marshal.

In 1962, the trial court, known as the U.S. District Court, moved to the then-new Federal Building at 450 Golden Gate Ave.

Appeals heard by 9th Circuit judges in the courthouse in recent years include the cases of the Napster music file-sharing program, ruled illegal by the court; California’s Proposition 209 ban on state affirmative action for minorities and women, which was upheld; and the state’s Proposition 8 ban on same-sex marriage, which was overturned but is now on appeal to the Supreme Court.

The 1989 Loma Prieta earthquake seriously damaged the courthouse and the building was closed for seven years for a $91 million renovation and seismic retrofitting program authorized by Congress.

The Post Office, which was by then the only other occupant of the building, moved out and the building is now used solely for the administrative headquarters, judicial chambers and courtrooms for the appeals court.

In 2005 the building was renamed the James R. Browning United States Courthouse in honor of the late Judge Browning, who served on the court from 1961 to 2000 and was its chief judge from 1976 to 1988.