SFPD Gears Up For Another SF Giants World Series 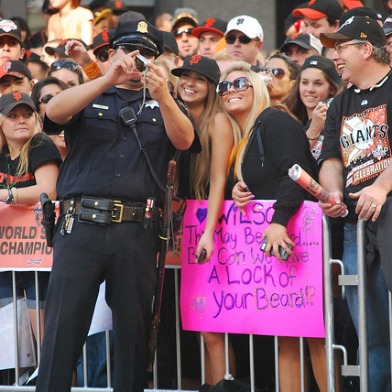 Baseball fans clad in black and orange will fill the streets of San Francisco before and after Game 1 of the World Series between the Giants and the Detroit Tigers tonight, and police say they are prepared for the crowds.

Police Chief Greg Suhr said top police brass met with the heads of several city departments Tuesday so “we know what every other agency is doing.”

The Police Department has reviewed its approach during the 2002 and 2010 World Series “to look at what we can do better,” Suhr said.

Crowd control will be a focus, and police will also be keeping an eye out for scalpers and unlicensed sellers of merchandise, he said.

Officers got to practice their crowd-control techniques on Monday, when the Giants beat the St. Louis Cardinals in Game 7 of the National League Championship Series to advance to the World Series.

“We appreciated the divine intervention,” he joked.

Police officers will not be allowed to take extra time off on game days, and all hands will be on deck if the series reaches Game 6, which would fall on Halloween, Suhr said.

“Every police officer will be working that night,” he said.

If the Giants were to win the World Series, Suhr said plans are already in place for a celebration and parade, which would go up Market Street and end in Civic Center Plaza, similar to the one in 2010.

However, he said the department is only referring to the parade as “the p-word” so as to not jinx the Giants.