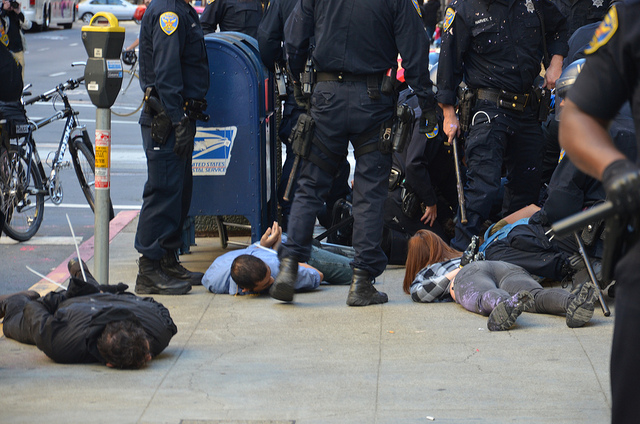 Around 22 people were arrested at a protest this afternoon at Justin Herman Plaza after projectiles including rocks, paint and flares were thrown at police, according to San Francisco police.

The protest, which began shortly before 3 p.m., started an unpermitted march west on Market Street, according to Officer Gordon Shyy.

Group members, many of them reportedly wearing black clothing and black masks covering their faces, began to block traffic, Shyy said. Some also allegedly vandalized vehicles and businesses as they walked.

When officers arrived on the scene they were struck by projectiles allegedly thrown by group members, Shyy said. One officer received a non-life threatening injury to his head.

Police circled and detained the protestors in the roadway at California and Battery streets, and the protestors allegedly threw flares and bags of paint at officers, some of which contained rocks.

Some protestors also fled to Pine and Sansome streets, and were detained there.

In total, police made 22 arrests, on charges including conspiracy, riot, refusing to obey a lawful order from a peace officer and resisting, delaying and obstructing a peace officer, and assault and battery on a peace officer.

Searches of the protestors’ backpacks turned up items including hammers, an ice pick, flares and other weapons and bags of paint containing rocks (pictured below).

Witnesses are being asked to contact San Francisco police.

Protestors have also established themselves in front of San Jose City Hall today for what organizers say is intended to be a peaceful 24 hour event, from noon Saturday to noon Sunday.

Demonstrators said they are emulating a similar event in Redwood City on Sept. 28 that took place without problems. They also said that they had attempted to work with city officials and even sought a permit for the event, but were unable to get an open response.

“We are happy to be proceeding with our event with the knowledge that we made every attempt we could to communicate with the city honestly and in good faith about our event,” the group said in a statement.