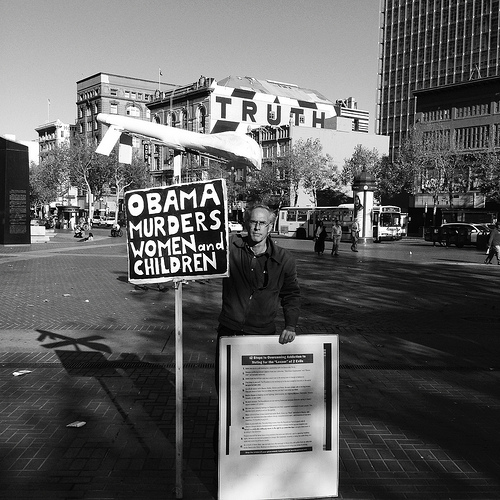 Anti-war protesters are rallying in San Francisco’s Civic Center Plaza today ahead of a fundraising event by President Barack Obama at the Bill Graham Civic Auditorium.

The several-dozen protesters critical of the continued U.S. military involvement in Afghanistan and other military operations in the Middle East were from the groups World Can’t Wait, Code Pink and Iraq Veterans Against the War.

The protesters carried signs with messages such as “Obama bombs funerals,” “Obama murders women and children” and “Shut down the war machine.” One poster featured the iconic image of Uncle Sam with the message, “I want you to kill and die for your American empire.”

“A vote for Obama or Romney is voting for more trauma in Afghanistan,” said Jason Matherne, a U.S. Navy veteran from Iraq Veterans Against the War.

Matherne urged people not to vote at all, saying that in terms of the war in Afghanistan, voting for either candidate would not affect policy.

Stephanie Tang of World Can’t Wait said that continuing the war in Afghanistan and drone strikes in countries like Yemen were criminal.

“Until we have a massive anti-war movement, these crimes will continue,” she said.

The protest also attracted some who disagreed with the cause, including one who stopped while riding by on a bicycle to yell at the protesters, “This is just one side of the story.”