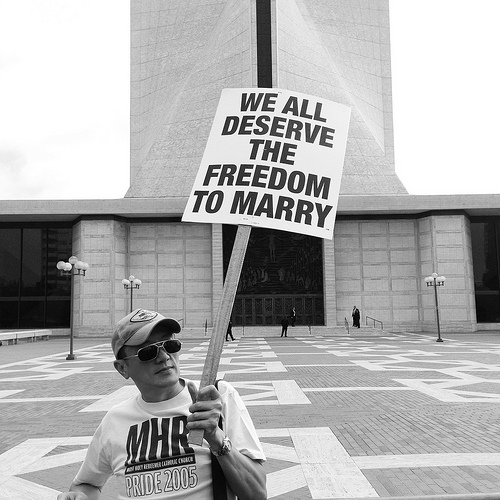 As Roman Catholic officials prepared to install Salvatore Cordileone as the new archbishop of San Francisco, about 25 protesters carried signs and marched outside St. Mary’s Cathedral, while an equal number clapped and sang in his favor.

Both groups gathered along Geary Boulevard outside the church before today’s installation ceremony, which was scheduled to begin at 2 p.m.

Protesters upset about Cordileone’s support of Proposition 8, Califoria’s ban on same-sex marriage, waved rainbow flags and carried signs with messages such as, “We all deserve the freedom to marry.”

“I’m here for gay people in general,” he said. “Cordileone has said we’re against the natural order of things. No, we’re not. We’re people. We’re family. I should be able to get married so that my son can be protected by two parents.”

They clapped and sang, accompanied by several guitarists and drummers.

On the plaza in front of the church, which was closed to the public, a mariachi band played. The band was part of one of several ethnic festivities organized for the installation by the archdiocese to celebrate the diverse cultures it encompasses.

Meanwhile, a steady stream of nuns and priests entered St. Mary’s Cathedral on the Gough Street side.

Cordileone himself walked into the church at 2:06 p.m., wearing a gold-threaded robe and a white mitre.

Cordileone was appointed by Pope Benedict XVI in July to replace current Archbishop George Niederauer, who is retiring.

He has had a rocky few months since his appointment. He was arrested on suspicion of drunken driving in San Diego in August, and issued a statement apologizing for his “error in judgment” and “the disgrace I have brought upon the Church and myself.”

He is due back in court in that case next week.

Cordileone’s installation brought skeptical comments from some members of the San Francisco Board of Supervisors at their meeting earlier this week.

Supervisor Christina Olague, who identifies herself as bisexual, said she was disappointed that the church would appoint “a person who has shown a great deal of intolerance for our community.”

Supervisor David Campos, who is gay, also noted what he said were divisive statements by Cordileone, but said, “I hope we can find some common ground.”

Cordileone has served as bishop of Oakland since 2009 after serving as an auxiliary bishop in San Diego and spending time in Rome, Costa Mesa and Calexico.